Arbroath Smokies - on the East Coast of Scotland

Ever heard of a smokie, an Arbroath smokie? Arbroath may not be that well known to the world but if the taste of food was a measure of the importance of a place Arbroath would be up there with the best.

A small town on the east coast of Scotland, just north of Dundee in Angus, Arbroath boasts one of the finest delicacies known - hot-smoked haddock - the smokie.

It's unique flavour has captured the imagination of today's chefs and gourmet cooks the world over. The local people have been enjoying them for well over a century! What's all the fuss about?

We paid a visit to this gem of a port recently and just couldn't resist tucking in to a few of these delicious fish. We weren't disappointed.

'A smokie is to the haddock what Parma ham is to the hind leg of a pig'.

Traditional Food of Arbroath and District

Back in the days when fish had to be preserved in natural ways fisher folk in the nearby village of Auchmithie, up the coast from Arbroath, took to smoking their freshly caught haddock. Their method, still practised today, involved cooking the fish in barrels over hardwood fires.

The fish would be gutted, topped and tailed, salted, dried for a short while then hung above the embers of a wood fire, often oak or ash or other hard wood. The resultant meat would remain juicy, firm and above all, hold a tremendous rich flavour.

Today, around a dozen family firms keep the tradition going. What evolved as a means of preserving fish has turned into a world beating industry, with sales to some of the top restaurants in Europe.

Best eaten 'straight from the barrel' they can be bought from small shops in town and consumed with chips (french fries) out in the open.

I can vouch for their wonderful flavour. I've never eaten fish like it. If by some chance you manage to get to Arbroath one day DO NOT pass up the opportunity to eat one or better, two, smokies.

Should you wish to continue with the smoky theme then I recommend you pop into a local pub and ask for a wee dram of Lagavulin, a peaty, smoky single malt. Just the job.

Recipes For the Arbroath Smokie

Smokies can be an integral part of several recipes, including:

The authentic, original smokie is under threat from some producers, who, instead of using traditional methods, mass produce the fish in electric ovens. Local smokehouse owners are not well pleased by this development. It undermines their sales and gives the smokie a bad name.

That's why some Arbroath producers want to gain appellation status for their product from the EU (European Union), which would guarantee the future of the authentic smokie and place it in the same league as say, Parma ham.

This would be a huge step forward and safeguard the traditional hot smoked haddock.

Arbroath Town and the Sandstone Coastline

Arbroath is situated on the beautiful east coast of Scotland and looks out onto the North Sea. Once a busy fishing port the harbour is now a safe haven for mainly pleasure craft, although a few fishermen still glean a living offshore fishing.

The town has a long history, going back to the 11th century when the abbey was built. The ruins are there today, built from the attractive local red sandstone. If you go walking out of town along the coast you'll come across this rich red stone in the cliffs that are battered by the waves.

You can walk for miles and explore the many caves and tiny beaches that give this coastline such a special feel. Be careful though, many steep sided cliffs are not fenced off!

Many different seabirds live here. On a good day you'll spot guillemots, gannets, kittiwakes, oystercatchers and puffins. If you're really lucky there are seals and dolphins too.

Air, Road and Rail to get to Arbroath

* By train from Edinburgh Waverley (77miles) which takes 1h 22minutes. 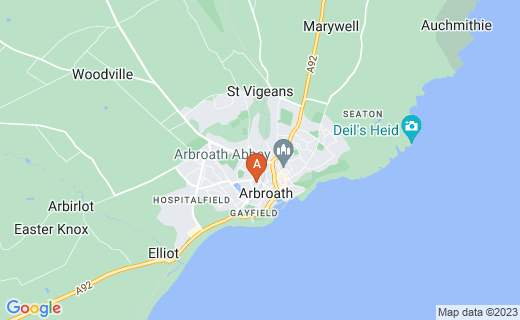