No trip to the great American West is quite complete without exploring the lives and culture of the Indian people who claimed this land as their own long before European settlers came on the scene.

Tuzigoot National Monument is one of several interesting locales in the north-central Arizona corridor along interstate highway 17 (I-17) south of Flagstaff and the Grand Canyon. The ruins belong to the Sinagua Indian culture, who occupied areas of the Verde River Valley, including the well-known Montezuma Castle, Montezuma's Well and the V bar V Petroglyph site, in nearby Camp Verde Arizona. Tuzigoot stands majestically on a hilltop overlooking the Verde River Valley, and unlike the cliff-dwellings at Montezuma Castle, are not built into the side of a cliff face, but are freestanding structures that are a lot like apartment buildings.

A short, steep trail leads through the ruins, with interpretive signs along the path. On the day we went, the welcome center was closed for rennovations and we had the entire place almost to ourselves.

Tuzigoot is a short drive from Jerome, Arizona and combines well with a visit there. Stop in nearby Cottonwood for a pleasant lunch or stay and camp at the nearby state park with fishing, boating, RV camp sites, and tent sites right in Cottonwood along the Verde River. The unfortunate, though colorful name of the park is Dead Horse Ranch State Park.

A visit to Verde Valley is a fabulous opportunity to experience some of the romance of the American West in microcosm, with access to Indian ruins, ghost towns, and the natural beauty and grandeur of the Verde River Valley all within about 30 miles of each other.

The Sinagua people lived between 600 and 1400 AD and are considered by the anthropologists at the University of Northern Arizona to be the ancestors of the present-day Hopi. Not much is really known about these people, beyond the findings in the cliff dwellings where they lived. A visit to the Tuzigoot site offers an interesting counterpoint to the more extensive ruins called Montezuma's castle, and the two sites are only about 40 minutes from each other, and the scenery along state highway 89a is pleasant and easy to maneuver with an RV. The two sets of ruins were inhabited by the same people, and yet there are distinct variations in building styles. The Sinagua are considered part of the Anasazi group of Indians who inhabited many regions of the Southwestern States in parts of southern Utah and Colorado, as well as Northern New Mexico and Arizona. However, the Sinagua lived in a geographical area limited to North Central Arizona, where they adapted their lifestyle to the land they inhabited. It is believed that the Sinagua intermarried with other tribes (the Hohokam, for example), and that they grew crops that were traded up from the native peoples of Central America.

Verde Valley is a great place to take a family with older children, especially children in the middle to late elementary years. Children at this age are usually fascinated by the ancient ruins of the Sinagua Indians. And their active imaginations fuel some interesting questions about life in a Sinaguan village. I loved imagining how the lived, what their society was like, and imagined children scurrying about at play and mothers washing at the river. I wondered just how safe their society was. Was it fraught with danger? Why was their city so well fortified? And how well did the communities that dotted the Verde Valley communicate with each other. From its vantage point high above the river, it is easy to image the Sinagua people guarding the mountain passes that led into the western-most end of the Verde River valley.

Where is Verde Valley?

Verde Valley lies about 80 miles north of Phoenix along the I-17 interstate freeway, and is on the way to Flagstaff, the gateway to the Grand Canyon. If you do not live in Arizona, and want to maximize your Grand Canyon vacation adventure without straying too far from your vacation destination, a stop for a few days in the Verde Valley is a great way to extend your vacation without spending too much on additional travel costs.

Tuzigoot National Monument and Nearby Points of Interest 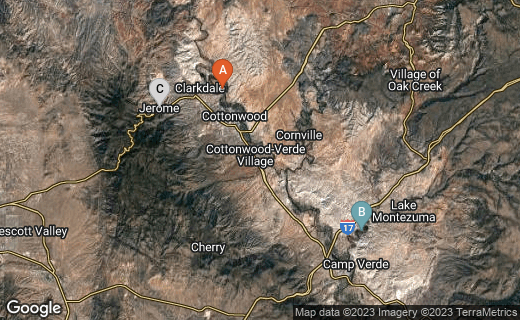 Montezuma Castle is a larger, well-known Native American settlement in Verde Valley. Make a visit to this site a part of your Arizona Vacation.

The once booming mining town of Jerome Arizona is nearby.

Tuzigoot and Related Points of Interest

Where to find Lodging

For tent and RV campers, your best bet is at Dead Horse Ranch State Park in Cottonwood, Arizona. This state park is so close to the ruins that you can actually see the park and the riparian habitat that surrounds the river from Tuzigoot. Dead Horse Ranch State Park, despite its ominous sounding name is an extremely popular camping spot. It has a well-stocked fishing lake, swimming, and RV campsite hookups with electricity. If you are planning to bring your RV, be sure to schedule your spot early, especially if you plan to visit during the park's busy summer season. Several primitive campgrounds are in nearby Camp Verde, and over 10 commercial RV parks can be found in and around Camp Verde.

For those who want to stay in a hotel, the nearest big towns are Camp Verde, about 20 miles to the east, and right on I-17, or Prescott, about 40 miles south. Prescott isn't much further than Camp Verde, but will take much longer to get there, since you will have to travel through a scenic by-way to get there. However, Prescott is its own attraction and is a much larger city than Camp Verde. I have visited and stayed in both cities and you will not be disappointed, whichever you choose. For some upscale hotel and resort options, Sedona is only a 45-minute drive from the Verde Valley. It is famed for its upscale offerings, including fine dining, many art galleries, and spectacular red rock scenery.