Art and History at the Kohler Design Center

The Kohler Design Center is a unique facility showcasing not only Kohler product designs, but the history surrounding the company and the Kohler family as well. The center is located in the village of Kohler, just west of Sheboygan, Wisconsin.

Admission to the center is free and open to the public. The quiet, stately building was originally built as a community center for the village and in 1985 was transformed into a design center and museum showcasing Kohler products.

Along the back wall of the main level, dramatic and somewhat whimsical sculptural installations greet the visitor. Created with Kohler products, this wall has been dubbed the “great wall of china.”

-Tours leave from the Design Center.

-Admission is free, but reservations are required.

-Participants must be at least 14 years of age and wear appropriate footwear and safety glasses.

The product displays in the Design Center are continually updated to serve as inspiration, and while design consulting is available here, sales are conducted only through Kohler distributors.

The three-level design center also houses a museum and arts/industry gallery on its lower level, and here the history of Kohler comes to life. The arts/industry program was created by the John Michael Kohler Arts Center, located in Sheboygan. The museum highlights Kohler's role in the development of the industry and the investment of the Kohler family in their home community.

The Kohler name is obviously known for plumbing fixtures, but there is much more to learn about this enterprising family and its influence in the state of Wisconsin.

John Michael Kohler immigrated to the United States from Austria with his family when he was ten years old.

As a young man in 1873, he acquired a cast-iron implement business in Sheboygan, and ten years later developed the first Kohler bathtub when he enameled a horse trough and attached legs to it. At that point his career was launched in the plumbing business.

While building up the company along with two business partners, John Michael Kohler also was quite involved in service to the community, and became mayor of Sheboygan in 1892.

He began construction of a new factory a few miles west of Sheboygan in 1899, on a tract of land in Riverside, later to become the village of Kohler. The factory burned before it was completed, however, and John Michael died unexpectedly in 1900 at age 56. His sons, Robert, Carl, and Walter, took over the operation from the partners, completing the factory and renaming the company John Michael Kohler Sons Co.

Both Robert and Carl died within the next few years, and in 1905, Walter J. Kohler became president of the firm. In 1912, the company name was officially changed to Kohler Co., and the Village of Kohler was incorporated.

Designed as a residential hall called the American Club for single male employees of Kohler Co., the building was constructed across from the factory in 1918, but sheltered by trees so as to keep the living space separate from the workplace. Walter Kohler, Sr., intended to create a comfortable living environment for the workers, most of whom had come from poverty. Many of the early employees were from Germany and other European countries, and were encouraged to learn English and pursue American citizenship.

The village of Kohler, founded in 1912 as an independently operated village for company workers, was planned with an English garden village design concept and not as a typical company town.

As the village and employee families grew, there became less need for a residence hall and the building eventually fell into disrepair. The club property was extensively remodeled from 1978 to 1981 under the direction of Herbert V. Kohler, grandson of the founder and president of the company until 2009, and today it houses a five-star resort, also called the American Club, featuring spas and golf.

After John Michael’s death, his son Walter J. Kohler continued the bath fixtures business and added his own invention, a generator powered by a four-cylinder water-cooled engine, primarily intended for farm use. The first of these was known as the Kohler "Automatic Power and Light." Kohler engines were used to power the generators from 1920 to 1948.

In 1949, Kohler began to market its engines to other manufacturing sources for farm and construction equipment. The company continues to manufacture aluminum and cast-iron engines today.

The Arts/Industry gallery in the Design Center's lower level showcases the work of artists-in-residence in the Kohler Arts/Industry Program. In this program, developed by the John Michael Kohler Arts Center in Sheboygan, the artists utilize Kohler manufacturing materials and work within the factory's Pottery, Foundry, and Enamel shop for a period of two to six months.

Other Nearby Kohler Landmarks 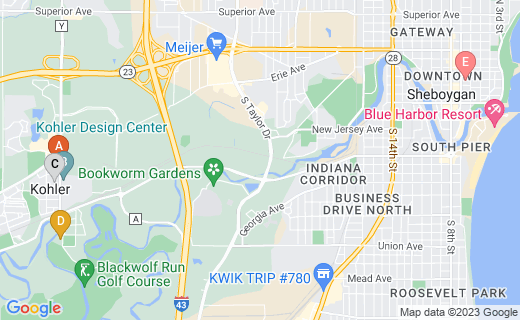