Ashton Park in West Kirby is an outstanding example of an early Edwardian public park. It has been awarded with Green Flag status from the Civic Trust every year since 2004.

The park can be approached via Carpenters Lane, a picturesque narrow passage overhung with trees which runs off Grange Road, and which invites visitors to walk beside the tennis courts then across the traditional rose garden.

Further along Grange Road is the start of the twelve-mile long Wirral Way which cuts the park into two sections. Once a railway track, this is now part of Wirral Country Park. This route will take visitors along a recently-improved tree-lined track and opens into the park close to the children's play area and one end of the pond.

The upper and lower areas of the park are linked by an iron bridge which passes over the Wirral Way and offers elevated views of the pond, and by a modern ramp which provides disabled access. 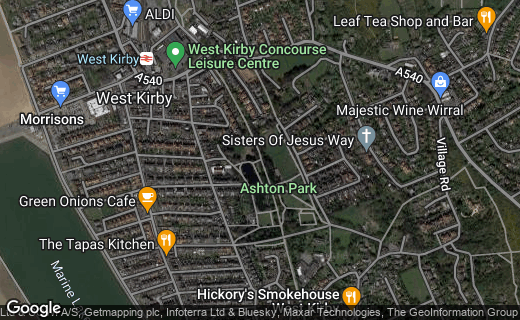 The Pond in Ashton Park

Signs of Times Past...

Ashton Park gets its name from Elizabeth M Ashton, who loaned the land for public benefit in the late 1800's. Additional land was leased from the Diocese of Chester, and the whole was purchased by Wirral Council after Elizabeth's death in 1935.

It is the third oldest public park in Britain, being pipped to the post first by Birkenhead Park and secondly by Bolton--which was the first to introduce a specific childrens' play area with swings and slides.

Initial plans for a bowling green, tennis courts and croquet lawns were quashed due to the marshy condition of the land. A quoiting pitch was laid down instead, but the first Park Keeper, Joseph Stanley, was so disapproving of ladies throwing quoits in public that his outrage is believed to have influenced the construction of the first of two bowling greens. This, apparently, was a far more suitable activity.

Today, there are two immaculate bowling greens, tennis and basketball courts, a children's play area, the famous rose garden and a large pond which is home to a variety of wildfowl including mallards, coots, swans, Canada geese and Muscovy ducks. The pond is regularly used by enthusiasts of radio-controlled model boats.

There is a small cafe staffed by volunteers from the Friends of Ashton Park, who have done a huge amount of work to raise money to bring this Edwardian park to the high standard it currently enjoys. Their projects have included the introduction of signposts and disabled access between the upper and lower parks. They also offer a year-round programme of events which includes concerts, plays, talks and exhibitions.

Sheltered by the trees, a visitor can hear nothing of the traffic which flows past the shops along Banks Road not two minutes' walk away--and the wooden benches here offer a handy resting place for weary shoppers. Likewise, the trees calm the oceanic breezes which have made the marina (just behind Banks Road) into an international sail-boarding attraction.

It's a place where people can wander quietly and watch the world go by; a place to simply sit and breathe and be, where anyone who produces a slice of stale bread is instantly surrounded by a loudly-quacking fan club.