A bit of history

Most people with a basic interest or knowledge in military gear, especially those who serve or have served in any military, have seen or have heard of the M65 field jacket. The design is simple, and has stayed essentially the same since around World War 2, when it was first introduced.

The M65 is designed to be worn as an outer layer to clothing systems. Most models have a hood that zips into the collar, two chest pockets, two waist pockets, and sometimes one or two interior pockets. These features can be found in most, if not all M65's.

The M65 designs of today are at the peak of their qualities, after having been tested over decades. Most have waterproof, usually Goretex linings, lightweight insulation (Some have no insulation, and some have buttons to add liners), and a tougher outer material, which varies depending on the military it is designed for.

With their widespread use, surplus M65 jackets can be found at very reasonable prices.

The M65 is obviously made for rugged, outdoor use, yet retains a certain style that allows those with a somewhat stricter fashion sense to still comfortably wear around urban settings. For me, however, practical use trumps fashion.

I bought my Austrian army M65 for long-term travel in any, and hopefully every environment out there in the world. I wanted a jacket with high storage capability, high waterproof capability, comprised of rugged and durable materials, while keeping a fairly low profile. The M65 definitely fit that bill.

I chose the Austrian army M65 rather than any other, for it's olive drab color. American jackets are mostly camouflage of varying types, which will always attract the eyes of others, more-so in urban settings. Olive drab is an older, mostly out-of-date style, which is less likely to lead people to believe you're currently in the military, which can be a great asset when travelling through less-friendly areas of the world. While this may be over-thinking, I prefer to be safer than sorry. The Austrian version keeps the subtle color, while still including a Goretex membrane, which can't be said for many others.

If you like the great outdoors, don't like the flashy colors of civilian clothing, and want a long-lasting and cheap jacket, take a look at the M65, and all the varieties it is supplied in. Even as a backup piece of gear, it's a great buy. My Austrian M65 was only $35 in almost perfect shape, but expect to pay $40-$60 most of the time for used jackets, and not too much more for new. It varies greatly depending on the camouflage pattern, what army it's made for, and of course what year it was made. Shop around, it's extremely easy to find deals.

Why the M65 may not be right for you

Well, i'm a practical guy, and I tend to only wear clothing that has a utilitarian use. Civilian jackets for outdoor use tend to be lighter, brighter (to help be seen easier), generally more breathable, and are constantly made with "next generation" materials. So for many, civilian gear seems to be best. The major selling point for me, however, is price. For $35 I got all I need in my Austrian M65, and for a civilian Goretex jacket I would expect to pay easily over $100.

If you have the money, consider civilian clothing lines. If you are on a budget, want to save your money, or don't mind missing out on a few of the non-too-necessary thrills of civilian gear, take your time to check out various military kit. Personally, I never go with civilian kit, unless there is an incredible deal that I just can't say no to.

The M65 is a tried and true jacket, used literally all over the world. After decades of modifications and testing, they are still one of the best jackets for hunting, hiking, travelling, and outdoor use in general . They can be found extremely cheap, if you shop around, and for those of us who aren't picky about the "latest and greatest" gear, and like to save a lot of money, checking out these jackets is a must. 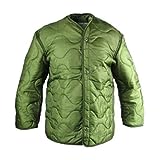