Baltimore's Enchanted Forest was a childrens' book themed amusement park that opened in August, 1955 on Route 40 in Howard County, Maryland. I remember riding past that kitschy place as a child but my mother disapproved. To her, it was silly schlock.

Nearly 50 years later, I granted my own wish. Along with two of my sons, I got to see the magic in person. But by this time, much of the Enchanted Forest had been bulldozed to make way for a shopping center, and the locally beloved landmark lay in ruins.

Perfect, beautiful ruins. I am so fond of ruined places. Nature had taken over and vines grew up a crumbling castle. A herd of deer ran down a path formally traversed by children. A ghostly air of poignancy hung in a mist over the lake where mysterious, slimy things briefly undulated along the murky silver-green surface of the water.

If I had ever wanted to enter a fairy tale this was the place. What was that rustling in the bushes? And that hooting scream, a heron, or something else? As my sons disappeared up a rusted water flume into a cave in the magic mountain or whatever it was, I wondered if they'd meet up with an evil troll or something worse. They'd fall into a big hole, I'd have to call 911, then the authorities would get involved. (Is there statute of limitations on trespassing?)

"But, officer, you see, this was a childhood dream of mine."

At the height of its popularity, the Enchanted Forest welcomed up to 300,000 guests per season. For one dollar each (50 cents for children) people streamed in to see their favorite childhood themes brought to life. Children could ride in tea cup shaped cars or enjoy the Little Toot boat ride.

A Theme Park Based on Books

Storeybook Themes in a Woodland Setting

Entering the park, one first viewed a castle, then progressed along wooded paths where you could see various characters and features from Mother Goose rhymes and classic children's stories.

Tiny cottages tilted at cartoonish angles. You could visit a house that looked like a giant shoe, the homes of the 3 Little Pigs, or take a dizzy ride on a tea cup. Willy the Whale and Mother Goose were popular attractions. A giant slide wound past a lake.

The attractions resembled illustrations from the books they were based on, a marvelous idea - books brought to life!

The Enchanted Forest began to lose its magic when compared to the burgeoning attractions of the late 20th century. People became willing to travel greater distances for their entertainments. Amusement parks became much grander, offering a wide variety of rides and the Enchanted Forest became a quaint memory, closing in 1989.

Old Cottages at the Enchanted Forest

Many of the structures at The Enchanted Forest were made of Celastic. Trade marked in 1926, Celastic was a material that could be stretched over wire forms or a frame. Plastic impregnated canvas was softened with acetone which made it easy to stretch and drape and mold over the forms. Celastic stuck to itself and dried quickly, creating a hard, weatherproof shield against the elements.

Celastic was used to create forms for the theatrical and entertainment industries into the latter part of the 20th century. The production and usage of Celastic ended due to the toxicity of fumes that could cause neurological damage.

For several years Old King Cole presided over the entrance to the shopping center, a reminder of what once was. The remaining part of the park reopened for a season in 1994, then closed for good in 1995.

Episode 45 in Season 4 of TV's popular Homicide : Life on the Streets was partially shot at the Enchanted Forest.

The Enchanted Forest Preservation Society still hosts reunions for former employees and has an online forum where people post memories and photographs. Their attempt to raise funds to preserve at least some of the park fell shot of its goal.

The rest of the property was torn down in 2013, for new business.

Saving Enchanted Forest One Piece at a Time

In 2004 Cinderella's Coach an artifact from the Enchanted Forest, appeared for sale on ebay. A local real estate agent named Debbie Burchardt had acquired the big orange coach when it was in disrepair. Burchardt had the coach refurbished by a fiberglass expert. The buzz helped garner support for the dilapidated park to no avail.

Today, many of the forms from the old Enchanted Forest can be found at Clark's Eliok Farm on Clarksville Pike outside of Ellicot City in Howard County. You can see Cinderella's Coach, Mother Goose, The Crooked House and many favorite pieces and structures from the former amusement park. 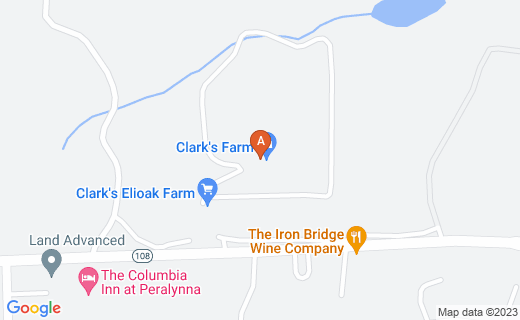