The beautiful glass palace at the south western edge of Druid Hill Park is the second longest surviving glass botanic conservatory in the United States. Designed by George Aloysius Frederick, the designer of Baltimore City Hall and Cylburn Mansion, the main part of the complex was opened in August of 1888. Additional greenhouses were added in the early part of the 20th century. Renovations between 1999 and 2004 added new buildings and included lead paint abatement, soil improvements, and renovations of heating, watering, and drainage systems.

Surrounding flower beds burst into bloom in Spring and continue into Fall. The conservatory offers educational workshops for adults and children, special events, flower shows, and a Farmer's Market during the local growing season. But my favorite time to visit is in the depths of winter. Last February, my husband and I spent several hours there while recovering from the flu. The exotic plants, the scent of herbs, and the sight of orchids in bloom seemed to aid in our recovery.

The Howard Peters Rawlings Conservatory is free to the public with a suggested $5.00 donation. Plants are offered for sale in the front lobby.

A Short History of Greenhouses and Botanic Conservatories

The Roman Emperor Tiberius kept an early form of a greenhouse to shelter tender plants. Portable plant beds on wheels could be hauled out into the sunshine, then wheeled indoors during the evening or on cool winter days. Thin sheets of mica allowed for transparent walls that let the sun shine in. It has been said that Tiberius never went a day without consuming snake melons, a type of melon that resembles a cucumber, grown in his own "green house."

In 1737 Andrew Fanevil built America's first greenhouse at his some on Tremont Street in Boston.

You can still see an early American orangery at George Washington's home in Mount Vernon that was inspired by Margaret Carroll's orangery at Mount Clare in Baltimore.

The Wye Orangery, built in 1785 in Talbot County on Maryland's Eastern Shore is thought to be the only remaining 18th century orangery in the United States.

By the mid 1800s homes of the elite often featured an addition based on the orangery. These conservatories housed plants raised in beds as opposed to greenhouses which contain potted plants. A conservatory originally described a glassed room that was attached to a home or building.

The Victorians were immensely fond of gardens and greenhouses. Botany became a passion in the 19th century, a time when people not only kept home gardens but also enjoyed the study of botany. Plant collections became so popular that even teenage girls approached the subject with fanatic interest. Victorian adventurers brought plant specimens from abroad. Middle class housewives filled their homes with house plants, and exotic species were cultivated by many.

The Crystal Palace, the largest of its kind, was built in 1851 out of cast iron and glass for the Great Exhibition at Hyde Park in London. It was destroyed by fire in 1936.

The plant craze began in Europe but soon spread across the Atlantic to the United States. The Baltimore Conservatory's design resembles both the Vienna Palm House in Austria and contains elements of the Kew Gardens Palm House (1848) at The Royal Botanic Gardens in London.

By the mid 1800s new technologies allowed for a greater use of glass. Instead of brick walls interspersed with glass, the new conservatories featured large sheets of glass supported by thin frames. Frames made of cast iron, steel, or wood supported large sheets of cast plate glass. New production methods created inexpensive yet strong sheets of plate glass that allowed more light inside buildings.

At one time Baltimore City was home to four botanic conservatories: The Druid Hill Park Conservatory, one at Lake Clifton, one at Carrol Park, and one at Patterson Park (pictured below).

Three of the four fell into disrepair and were demolished. The conservatory at Patterson Park was built in 1876 with a wooden frame. The wood frame began to deteriorate in the early 20th century and was torn down in 1948.

The Palm House is the original building at the Howard Peters Rawlings Conservatory complex in Baltimore. The height of the roof allows for the growth of tall palm trees with are underplanted with low growing plants.

The Mediterranean House contains olive and citrus trees, scented geraniums, rosemary, and bay. In the photograph, you can see large rosemary specimens in bloom. (The scent is heavenly)

The desert Room offers warm temperatures in an arid 20 - 30% humidity. Desert plants include sugaro, agave, yucca, several types of aloe, jade, and a wide variety of cacti and succulents. 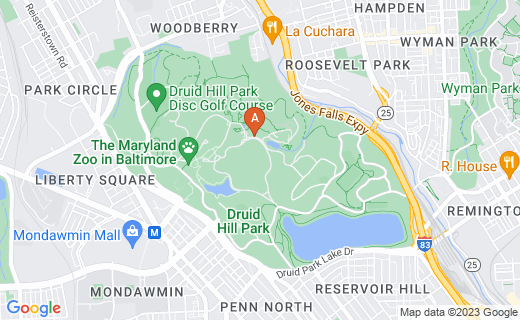