Baltimore, Maryland is home to a rich architectural heritage. From Colonial workers' homes and mansions, to ornate Victorian houses, churches, and civic buildings, Baltimore has a lot to offer people who enjoy historic buildings.

In the mid 19th century, Baltimore became a major manufacturer of iron. New technologies of the Industrial Revolution, the dawn of the railroad industry, and the convenient availability of iron ore and coal helped establish Baltimre as a hub of iron production and the fabrication of iron products. The railroads created a demand for iron as well as a means of distribution.

Few iron facades are left. Many beautiful iron buildings and iron facades were lost to the Great Baltimore Fire (1904) and to redevelopment. But a few remain. Ornamental iron, whether cast or wrought can be seen in many places around the city.

Though iron has been used for thousands of years, most iron was formed in the past into small objects due to the difficulty of working the hard material. The Chinese created cast iron statues in the 8th century. Renaissance Spain, Itay, and France produced beautiful wrought iron screens for churches and cathedrals.

Later, iron was used to make locks, fences, gates, stoves, and utensils. But the handcrafted material was costly due to the difficulty in production.

Wrought iron was produced in Europe by 600 BC. The metal for wrought iron is heated until softened, turning bright red, then pounded into shape. As a handcrafted product, wrought iron is still somewhat expensive. Wrought iron can be recognized by its simple shapes and geometric designs.

Cast iron is formed in a mold or in sheets and offers fabricators the opportunity to wrap columns, or created detailed patterns and delicate design motifs.

The highly decorative architectural styles of the Victorian age popularized the use of cast iron for building facades and decorative embellishments. A cast iron facade took less time and expense than the masonry used in the past. While it took years to create a building of extravagantly cut stone, it took mere months or weeks to fabricate a cast iron facade. Sections of cast iron could be molded, stamped, or drawn into sheets and transported to the building site.

In 1851, A.S. Abell saw the completion of the Sun Iron Building, home for the Baltimore Sun Newspaper. The 5 story building at Baltimore and South Streets featured 2 full iron facades as well as internal supports made of cast iron columns, designed by the famous cast iron advocate, James Bogardus. Sadly, the beautiful building was lost in Baltimore's terrible fire in 1904.

Dating from 1871, the former warehouse and office building of William Wilkins stands today as an exquisite example of cast iron architecture. The strength of cast iron, able to withstand a downward force of 40 tons per square inch, allowed for large windows which let in natural light.

In danger of demolition due to vacancy, chunks of fastenings and decoration occasionally fell to the sidewalk. Renovations began in the late 1980s. Missing details were cast in aluminum and new supports of structural steel were added to the interior.

Now in private hands, this gorgeous building is located at the edge of Baltimore's Little Italy.

The Erlanger Building is a turn of the last century loft with a beautifully restored iron storefront, basket weave brick above, topped by large, arched windows. Erlanger, Bonheim, and company were garment manufacturers who went on to produce the famous BVD underwear.

Built in 1870, the large building was divided by 2 party walls into space for three separate businesses. Renovated in the early 1980s, the brightly painted cast iron facade is now home to the Pratt Street Ale House.

The Rombro Building at 22 - 24 South Howard Street was built in 1881. Stone columns in the upper stories reflect the design of the iron storefront facade in this beautifully renovated building.

The niece and ward of President James Buchanan, Harriet Lane was a partner in the business of Johnston Brothers who developed the property. The name of the building derives fromo Morris Rombro who purchased the property in 1919.

Ornamental iron could be made of cast iron or wrought iron. In some instances, wrought iron would be used as vertical and horizontal supports for cast iron panels.

Fence at the George Washington Monument at Mount Vernon Place

The fence surrounding the Washington Monument at Mount Vernon Place in Baltimore is a lovely example of ornamental iron. Designed by Robert Mills and erected in 1838, the fence features a gate with 13 stars (12 stars surrounding one central star), symbolizing the 13 original colonies.

Spears and tridents represent George Washington's concern for the strength of the union.

The Peabody Library at Mount Vernon Place features 5 tiers of ornate cast iron balconies. Erected in 1878, the beautiful library is like a treasure room dedicated to books, romantic and genteel. A visit to the Peabody Library is awe inspiring, as your eyes travel around the room and up toward the skylight.

This cast iron balcony on Charles Street in Mount Vernon Place is in excellent condition. While it may seem incongruous that iron should add a lightness to a building, the delicate detailing adds an almost lacy quality to the plain facade.

This type of decorative iron, often associated with New Orleans, was popular in Baltimore during the Victorian era.

The decorative iron fence that stands on top of a brick wall offers this structure security mixed with elegance.

The handsome cast iron balcony on a brownstone townhouse in Mount Vernon was erected in 1853.

The ornamental iron of this balcony in Mount Vernon Place adds a distinctive touch to a brick building, creating an almost feminine sense of elegance.

The ornamental iron window guards add a delicate touch to this building. They also serve to disguise the window box air conditioner, a lovely and certainly unplanned coincidence.

The ornamental iron window guard serves both security and elegance in this Fells Point shop. Currently in use as a window box for flowers, decorative iron never really goes out of style. 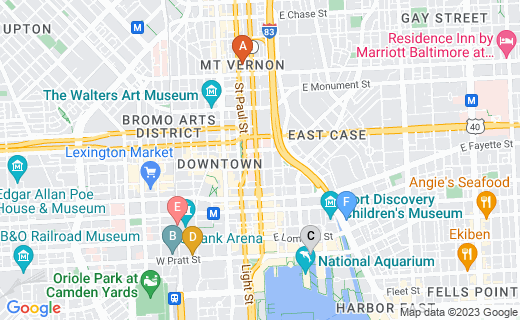