Banff Springs Hotel:Castle of the Rockies

Sharilee is a proud Canadian who has lived in three provinces and one territory. She enjoys travelling around her beautiful country.

Castle of the Rockies

To the west of the Canadian Prairies and to the east of the Pacific Coast, lie the Canadian Rockies, home to the Fairmont Banff Springs Hotel. This castle of the Rockies is unique to this area and a surprising change from the chalets and log cabins commonly seen in the area.

Much like the castles of old, it stands apart from the town of Banff, its scale and grandeur far different from the village atmosphere of the rest of the town.

How did this grand structure come to be, in the middle of the mountains of Canada? Who had the means and desire to build such an edifice in a place where winter comes so early, and stays so late. And how does one stay in this castle, and how much does it cost? This article will answer all the questions and more, about the fascinating Banff Springs Hotel.

I will also tell you that I have a personal fascination with hotel. As a former Calgarian, I used to love to drive to Banff and the beautiful hotel has always held a certain mystique to me. I have never had stayed there overnight, but I have spent time in the public areas and have had several friends and family members who have stayed there. I am doing research for my own interest, and look forward to sharing my finds with you.

Different Views of the Hotel 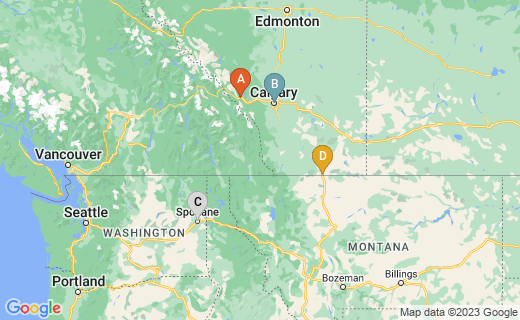 Banff is a resort town located in the Banff National Park, a protected area of Canada.

Calgary is located an hour and a half drive from Banff.

Banff is approximately eight hours away from Spokane, Washington, by car.

If you are travelling by highway, from the States, note that the town of Banff is located approximately 5.5 hours from the U.S.A. / Canada border.

Moon Canadian Rockies: Including Banff & Jasper National Parks (Moon Handbooks)
If you are considering a trip to the Canadian Rockies, this book is a must-have. It is written by Andrew Hempstead, an experienced travel writer who has extensive knowledge of the region that he generously shares with you. Ideas and insight that only a local would know about. I would recommend this book.
Buy Now

Where Is Banff Alberta?

Banff is located in Alberta, Canada. Alberta is known for its prosperity from rich oil fields and a generous natural gas supply. Banff is an hour and half drive from Calgary, Alberta, the biggest city in the province of Alberta, and a fast-growing metropolis. Banff can be seen in the horizon by Calgarians and is a favoured destination by Calgarians searching for a getaway.

The town of Banff can be reached by driving along the Trans Canada Highway, as it is called by Canadians. The small town is a world-wide tourist attraction located in the midst of the Banff National Park. Approximately 3.5 million visitors come to Banff National Park on an annual basis. The park is a protected 2564 square miles of wild mountains, glaciers and lakes.

For American visitors, the town of Banff is about an eight hour drive miles from Spokane, Washington and about a five hour drive from the US / Canada border. Tourists can also get there by plane, first to the Calgary International Airport, and then with a shuttle from the airport. You will never run out of things to do at the Fairmont Banff Springs Hotel. Besides the wealth of natural beauty found in the town and surrounding park, there are numerous features to be found at the hotel itself. This is definitely a resort in every sense of the word!

First of all, the hotel features twelve restaurants and lounge, including a sushi bar, a restaurant bar with German/Swiss cuisine and many others.

The women I know who stay at the Banff Springs Hotel have liked two things best: the shopping and the spa! These features are done to perfection.

There are seventeen different shops located right in the hotel, including some for enjoying the outdoors, as well as a wealth of gift shops, with art, gifts and clothing.

The Willow Stream Spa of the Fairmont Banff Springs Hotel is designed to have a similar feel to the hot springs so famous in the Rockies and is the ultimately pampering experience.

For kids, there is a bowling alley, including a neon blacklight feature. Kids can also take part in a program called Kid's Club, which has trained childcare staff taking children on hikes, walks and other adventures.

For the adults, there are two full size golf courses. Imagine golfing your nine yards while breathing fresh mountain air and gazing at some of the world's biggest natural

Staying At the Banff Springs Hotel

Booking can be done online at Fairmont.com. According to the company website, rooms range from $299 a night, for a basic room, up to $889 for the best room in the house.

The best room is going to get you over 600 square feet of space, a lounge, view of the mountain and a private valet just for you.

Although these are the listed prices, I do know from friends and family, that better deals come up from time to time. There is also a special price just for local Albertans.

Getting to the hotel can be done by car or from the nearest airport. The closest airport is the Calgary International Airport, and there is a direct shuttle service from the airport.

Please note that these prices are all from research done in August 2012. Please check the websites for current prices.

View From the Banff Springs Hotel Other Things To Do In Banff, Alberta

There are many things to do in beautiful Banff, Alberta. First of all, just look around you. Being in the town itself is exhalirating because of the breathtaking beauty. Taking pictures can be enough to keep some people busy.

It is also cool to witness the wildlife that are allowed freedom to come around the town. It is not uncommon to see some deer, elk and mountain goats on the side of the road or crossing some grass. Park authorities, though, do caution to not get too close. They may be cute, but they still are wild animals! For more about wildlife viewing, see these suggestions from Parks Canada.

You can also walk around the town and take in the stores. Stores are designed according to guidelines set out by the town of Banff to give it a consistent rustic feel.

There are many interesting stores to browse in, including lots of gift shops and art galleries. As well, there are many restaurants, lounges and coffee shops. Two of the most popular tourist attractions include the Banff Upper Springs and the Banff Gondola. The Hot Springs offers a hot soak straight from spring waters. I have soaked in these hot springs and I can attest that they are truly relaxing.

The Gondola offers a ride up to Sulphur Mountain. It is fun but a bit scary if you have any fear of heights or suspension. I have taken the ride a few times, but each time, I did hold unto the side of the car! Let me say that it felt like more than a five minute ride. The view from the top of that mountain, however, is well worth a little nervous tension!

There are also many opportunities for outdoor adventures in Banff, including some world-class skiing in the winter at the park's several ski resorts, including Lake Louise and Sunshine Village.

Famous People Who Have Stayed At Banff Springs Hotel

When royalty comes to town, where do they stay? If it's Banff they are coming to, they stay at the Banff Springs Hotel. The hotel has had the pleasure of putting up Queen Elizabeth in 1951 (while she was still a princess) and again in 1959 and once more in 2002.

King George, father of the present queen, stayed at the Banff Springs Hotel with the present Queen Mother in 1939. Other famous guests have included Helen Keller, jazz musician Benny Goodman.

Marilyn Monroe also stayed here during the filming of the movie, The River Never Ends. Just recently, never before seen photographs of her surfaced and were made available in a book done by the photographer, John Vachon. Monroe stayed there to get better after breaking her ankle during the shooting of the movie.

In recent years, celebrities associated with the hotel have included William Shatner, who taught a class there and received a Lifetime Achievement Award from the Banff World Television Awards. According to this fun article featuring an interview with the guest relations manager, Meg Ryan and Robin Williams. among countless of other celebrities, have all been guests of the hotel.

Banff Springs: The Story of a Hotel

Banff Springs The Story of a Hotel
This book is the go-to book for learning about the fascinating history of the Banff Springs Hotel. Written by a local author, the book ties in anecdotes and factoids to make a mesmerizing reading experience.
Buy Now

History of the Banff Springs Hotel

The history of the Fairmont Banff Springs Hotel is a page-turner. Motivated by commerce and gripped by a vision, William Cornelius Van Horne, manager of Canada's national railroad, wanted to find a way to bring visitors to Canada. He is famous for saying "since we can't export the scenery, we will have to import the tourists."

Van Horne, determined to develop the business of tourism in the Rockies, had three smaller hotels built in throughout the Rockies. He used the services of the famous New York architect, Bruce Price, father of Emily Post, the etiquette lady. All the while, Van Horne was planning for his grand project.

The hotel was built in 1888, by Price, at a cost of a quarter of a million dollars. The equivalent cost today would be almost almost six million dollars. The original design was quite different than today's structure and was closer to the style found in the rest of Banff of a Swiss chalet. The first hotel was made entirely of wood.

The original hotel burnt down in 1928, but by that time, there had been numerous renovations done and so there was still a building there. Another American architect, William S. Painter, rebuilt the structure using concrete faced with stone into its present state. Since 1928, there have been numerous renovations and additions, including a state-of-the-art spa and an on-site staff housing unit.

I Hope You Enjoyed The Tour

I hope you have enjoyed this learning expedition focused on the Fairmont Banff Springs Hotel. I know I have learned a lot about this fascinating building. I learned that the hotel has connections with etiquette, with famous starlets and with royalty. I found out that the same person who spearheaded the building project was in charge of a whole railroad. And I learned that the hotel, unlike the mountains, has changed and transformed itself throughout the years. I hope you learned something new, too. And if you ever decide to stay there, enjoy yourself!