The author lives in a quiet seaside community in Puna on the Big Island of Hawaii. He's an avid gardener, traveler, and photographer.

A visit to Barcelona, Catalonia, Spain is not complete without going to the Mercat de Sant Josep de la Boqueria – also known as La Boqueria Market or simply La Boqueria.

Voted #1 out of “10 Of The World’s Best Fresh Markets” by CNN Travel, La Boqueria is located on the famous La Rambla stretch where hundreds of shops, theatres, cafes, and restaurants line the street and pedestrian lane.

A myriad of fruits, vegetables, meats, seafood, spices, sweet snacks, and more are for sale under the market’s gigantic roof.

Always jam packed with shoppers – locals and tourists – the market is also known for its excellent tapas bars and small restaurants.

Visitors get to experience the market’s unique sights, sounds, and smells, as well as the rich Catalan culture and hospitality through interaction with the vendors.

Originally dating back to the 13th century, La Boqueria was a small open-air farmers market, held outside the old city walls where pigs and other farm animals were sold.

Between the 14th and 18th century, the market grew steadily larger – joined by fishmongers and butchers – and became more popular as residents from nearby villages came to shop/trade their goods.

In 1826, the market was officially recognized and city officials decided to build a permanent structure to house the market.

From 1835 to 1840, Catalan architect Mas Vilà was commissioned to build a market, on a large city square next to Sant Josep Church (which was later demolished to accommodate the market’s numerous expansions).

Completed by 1843, the market however went through long periods of re-construction before officially opening to the public in 1853.

In 1863, fruit, vegetable, and flower vendors began setting up their stalls in the market.

In 1914, the market was modernized: electricity replaced gas lights and a new ornate metal roof.

In 2003, a Market Cooking School was opened. Students learn how to cook using fresh ingredients gathered from the market. It also hosts special culinary/gastronomic events throughout the year.

Today, La Boqueria Market is considered to be one of the most iconic symbols of Barcelona. It covers an area of 2583 m2 (more than half acre) and currently has 300 vendor stalls. Some of the vendors are third and fourth generation vendors who have been working at the same market since centuries ago.

Things to Do at the Market 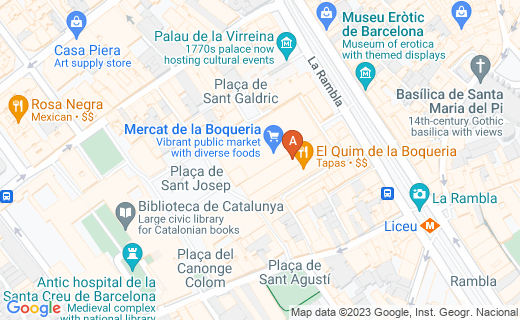 Have you been to La Boqueria Market in Barcelona?

The author loves La Boqueria. He spent a whole afternoon there, eating his way around the market. A foodie’s paradise!

All photos were taken by the author with an Olympus Stylus TG-630 iHS digital camera.