With just one day to spend in Malta as part of a Mediterranean cruise, we wanted to be sure to visit the beautiful Barrakka Gardens in Malta’s capital city of Valletta. Having read about the amazing views of the harbor from the gardens, we were anxious to see firsthand what all the fuss was about. Our anticipation was handsomely rewarded.

The Barrakka Gardens are actually two separate gardens, the Upper Barrakka and the Lower Barrakka Gardens. Both sites definitely offer magnificent views of the Grand Harbor and both are easy to find on your visit to Valletta. If you are looking for a beautiful garden setting with stunning views, and a chance to relax from the hustle and bustle of touring Valletta, then head to the Barrakka Gardens.

Of the two gardens the Upper Barrakka Garden is clearly more impressive and if you only have time to visit one, then make sure this is the one.

The Upper Gardens are located at the top of the new lift that takes visitors from the cruise ship dock up into Valletta. This is the highest point in the city of Valletta and if you decide to climb the stairs it can be quite challenging. There is a new elevator lift, which is a welcome addition for most visitors and makes accessing the city of Valletta easy. We decided to climb the stairs in lieu of the lift and there are a lot of them, so be forewarned. But, the effort is rewarded at the top as you exit into the beautiful setting of the gardens and that amazing view.

As you head to the overlook to catch a glimpse of the Grand Harbor the first thing you will notice is the saluting battery just below you. The eight cannons of the battery guard the harbor and they actually fire them daily at noon and 4 pm, which is an added treat if you can arrange the timing of your visit.

Across the harbor are the three very picturesque forts guarding the city and the harbor; Fort Ricasoli, Fort St. Angelo, and Fort St. Michael. For a small fee (2 euro) you can access the Saluting Battery to watch the loading of the cannons, see them fire, and learn the history of the gardens from a local expert.

The gardens actually date back to the time when the Knights of St John were based on Malta and they were initially the private gardens of the Italian regiment of the Knights. Later, in the early 19th century, the gardens were opened to the public and visitors today can admire the colorful flowers, statues, and incredible views for free.

Cannons Fire at Noon and 4 pm

As you walk from the overlook terrace through the colonnade into the gardens you will notice that there are a number of statues in the garden. There is a bust of Sir Winston Churchill; the famous statue Les Gavroches (“The Street Boys”); and a number of other statues and plagues of prominent military officers and leaders from Malta’s storied past. The garden contains numerous benches and provides a shady respite to read, relax, meet friends or just stare out over the harbor.

If you are visiting Valletta as part of a cruise and are venturing into the city on your own the Upper Barrakka Gardens will be your first stop heading into the city. It is only a five to ten-minute walk from the new cruise ship dock to the lift so they have made this very easy for cruise ship visitors.

The elevator lift costs one euro for a round-trip ride

The Lower Barrakka Gardens are located at the other end of Valletta and if you are touring the entire city you will most certainly stumble upon them at some point. Not as large or impressive as the Upper Gardens they are still worthy of a visit and offer a different, yet just as spectacular view of the Grand Harbor.

The centerpiece of the Lower Gardens is the neo-classical monument dedicated to the first British Governor of Malta, Sir Alexander Ball. The monument sits in the center of the gardens with a fountain in front of it. Just below the gardens is the Siege Bell Memorial with its ten-ton bronze bell. This memorial commemorates the seven thousand people who were killed in the two-year siege of Malta by Germany and Italy during World War II. In 1992 Queen Elizabeth II christened the memorial to signify the 50th anniversary of the siege.

Much like the Upper Barrakka Gardens, this is a wonderful place to unwind and relax with a great view while you watch the ships sail in and out of the harbor. Even the very large cruise ships make their way into the tiny harbor, which is an amazing sight to see as they navigate through the tight harbor entrance.

I hope you enjoyed this tour of the beautiful Barrakka Gardens of Valletta, the capital city of amazing Malta.

Malta was a British colony during WWII. During the war, Malta was strategically important due to its location between Africa and Europe, and its proximity to Mediterranean shipping lanes. It wasn’t until 1964 that Malta gained its independence from the United Kingdom.

Video of Malta and the Upper Barrakka Gardens 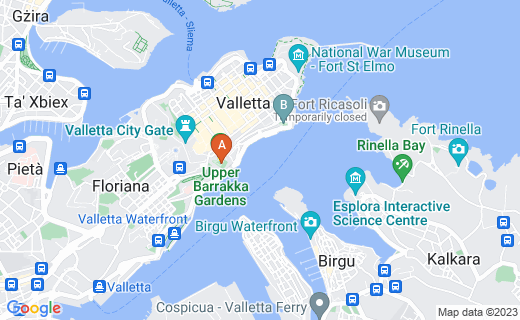