Basic Facts about the Canary Islands

Part of Spain, the Canary Islands are located in the Atlantic Ocean 1,350 km south of the Iberian Peninsula. They lie closer to the African coastline than they do to Spain, with their nearest neighbour being Morocco, a mere 95km away.

Known as Islas Canarias and The Canaries, this archipelago contains 7 main islands and another small group of 6 islands known as the Chinijo archipelago which are mostly uninhabited.

The Canaries have so much to offer visitors from their beautiful sandy beaches and glorious sunshine to their world recognized natural attractions and breathtaking landscapes.

Each of the islands is volcanic in origin and serves as a reminder of a large volcanic mountain range lying beneath the Atlantic Ocean.

The volcanic crater at Mount Teide on Tenerife is the highest volcano in Spain and the third tallest in the world of a volcanic ocean island.

A major landmark in Tenerife it was designated a National Reserve in 1954. Only one of the islands, La Gomera has had no activity in the last million years and only four seeing activity in more recent years.

Known as “The Land of Eternal Spring” the wonderful sub tropical climate of these islands, produces all year round sunshine. The temperatures here rarely drop below 18C in the winter, rising to over 24C in the summer months.

This subtropical climate is regulated by the Gulf Stream and Trade Winds which affects the climatic conditions of each island individually.

As the islands all lie at different locations in respect to the north-east trade winds, climates may be warm and wet or very dry. With over 12 million visitors a year, the islands are a popular all year round destination for tourists.

Tourism has been a major growth Industry for The Canaries since 1990 with large amounts of foreign investment used for developing real estate including hotels and apartments.

The most popular islands in terms of visitors each year are Tenerife, Gran Canaria and Lanzarote followed by Fuerteventura and La Palma.

In addition to tourism, there are approximately 300,000 foreign nationals who live on the islands and are mainly British, German, Moroccan or South American.

My first holiday abroad with friends was to Gran Canaria and the lively resort of Playa del Ingles.

Five Irish girls living it up without the watchful eyes of our parents bring back many unforgettable memories in this party town that seemed to never sleep. 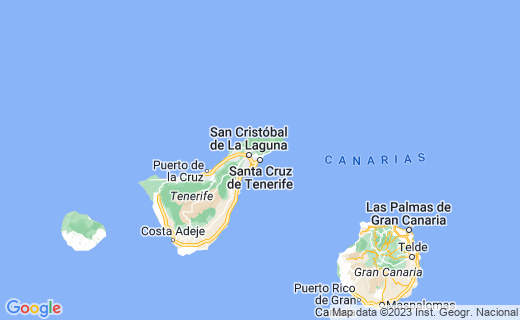 This island is the largest, most populated and most visited. Serviced by two airports (Tenerife North Airport and Tenerife South Airport) it welcomes over 5 million visitors annually.

The most popular place to visit on Tenerife is the volcanic crater of Mount Teide which was designated a National Reserve in 1954 by the World Heritage.

The island is one of the most liveliest, if it is partying through the night you are seeking and the hotspots of Los Cristianos and Playa de La Americas have more than enough bars, clubs and restaurants to satisfy.

If enjoying nature is more your passion then this island is the perfect place to soak in the extraordinary wealth of natural beauty that exists in the islands.

With 43 protected areas Tenerife is home to over 1400 species of plants and unique species of mammals, reptiles, invertebrates, birds and fish. 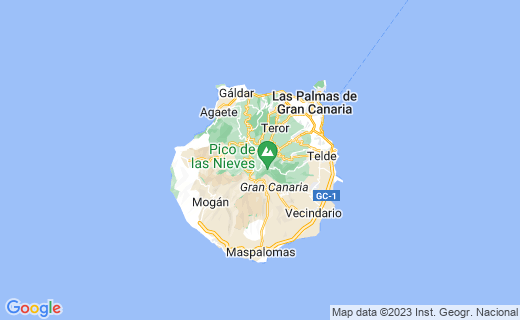 The second most populated and visited of the Canary Islands, Gran Canaria is an island full of climatic and landscape contradictions.

The north of the island is cooler and less visited than the warm and sunny south which tends to be where tourists flock to.

Approximately half the island is a protected area and there are a staggering 33 different areas including nature reserves, nature parks, protected landscapes, and areas of scientific interest.

With over 2.2 million visitors a year, the main tourist resorts are Playa del Ingles, Puerto Rico, Maspalomas and Las Palmas which are serviced by the only airport on the island; GranCanaria airport.

Horticulture is a thriving industry here and plantations of coffee, sugar cane, tobacco and bananas grow alongside orange groves. Thousands of exotic fruits including mangoes, papayas and avocados are grown in abundance. 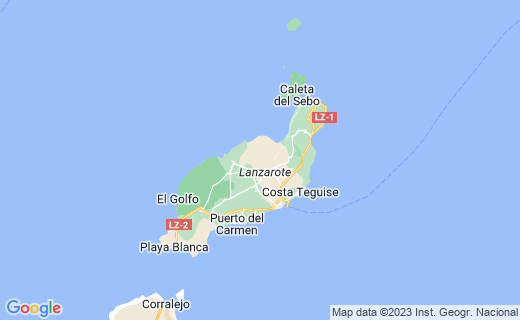 Vines Growing On a Crater

Lanzarote is driven predominantly by tourism and agriculture. A beautiful volcanic island with stunning beaches it possesses its own unique identity.

One of the most dramatic landscapes on this island is at the Timanfaya National park which is entirely volcanic.

The last eruption was in the 18th Century but volcanic activity is still present with hot point areas that can reach temperatures of 100 – 200 C at the surface and up to 600 C at a depth of 13 metres.

Vineyards growing in volcano craters are quite a sight and this is the island for volcano powered barbeques!

I spent a week in Playa Blanca on my own for a chill out week in the sun during the month of February for some much needed winter sun.

I loved everything about this place and it was ideal for a single girl who wanted to have a vacation alone and feel totally safe. 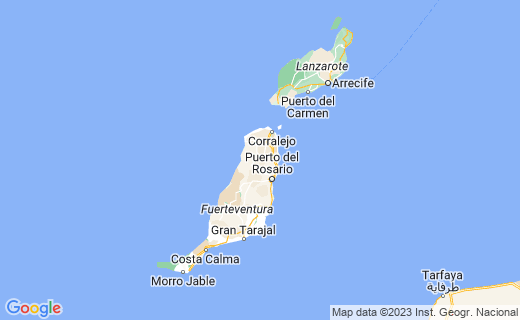 Believed to be the oldest island in the archipelago, Fuerteventura is the second largest island.

With its elongated shape, it is little surprise to find out it has the longest beaches out of all the islands.

The beaches are either golden sand or black volcanic shingle and there are no fewer than 152 dotted along the coastline.

In 2009 it was declared a Biosphere Reserve by UNESCO.

If you are looking for a wild party atmosphere then this is not the island for you.

Ideal for those looking for a more relaxing holiday such as couples, families or nature lovers, looking for some winter sun.

Water Sports enthusiasts particularly windsurfers will be in paradise here.

World class windsurfing conditions on the wild west coast of the island are in complete contrast to the safe, secluded waters on the east coast. 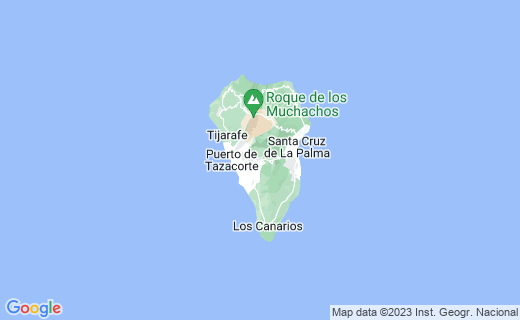 Room With a View

Said to be the most unspoilt and beautiful of the top 5 islands, La Palma is well worth a visit.

The island is situated 200km west of the African coastline (the furthest away of the group) and the nearest land west of it is Brazil.

The main holiday centres on the island are Los Cancajos, Puerto Naos, Tazacorte, and Santa Cruz de La Palma with many tiny villages dotted around the island which are ideal for those seeking less commercial settings.

The spectacular volcanic crater of Taburiente was designated a natural reserve in 1954 and is a major attraction for visitors.

The Caldera del Taburiente is the world’s largest erosion crater with a diameter of 10 kilometres and a wall height of up to 2000 metres.

The crater lies within the stunning Taburiente National Park which totally dominates the landscape.

The main flora of the park is mad up of an extensive forest of Canarian Island Pine which also has an important population of the endangered Canary Islands Juniper trees present. 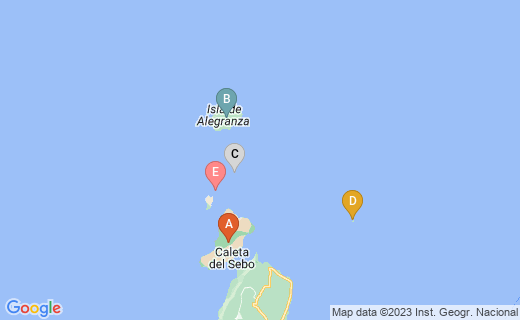 Located in the northeaster part of the Canary Islands, these islands are all uninhabited apart from La Graciosa which is the smallest inhabited island in the Canaries but the major island within the Chinijo Archipelago.

With a population of less than 1,000, there are only two inhabited settlements on La Graciosa.

For those looking for a quiet retreat Caleta del Sobo and Casas de Pedro Barba are the options here.

Roads and even pavements are only unpaved sand, often being swept of footprints by the locals in the early morning.

If living simply is what you want from your holiday in a beautiful natural landscape, this island made entirely of volcanic rock and sand is the place for you to kick back in.

Located a few kilometres off the coastline of Fuerteventura, Lobos Island or Isla de Lobos is popular for day trippers who have an interest in geology, flora and fauna. Monk seals were the only inhabitants on the island when it was first discovered in the 15th century and are mostly extinct today. The island was the first of the islands to be designated a natural park and it has since been recognised as an area of special protection to birds. To protect the natural beauty of the island, limited access is afforded to visitors with many restricted areas.

A small uninhabited island Alegranza is home to a volcano. The volcanic crater measures 1.1 kilometres in diameter and an altitude of 289 metres. On the eastern side of Alegranza is a lighthouse which was first discovered in 1865 and was designated a historical monument in 2002.

Volcanic in origin and totally uninhabited, it is a tiny islet that is part of a nature reserve and a refuge for marine birds.

The two smallest in the group they are both volcanic in origin and uninhabited.

What interests you most about The Canary Islands?

Interesting Facts About The Canary Islands ~

Map of The Canary islands 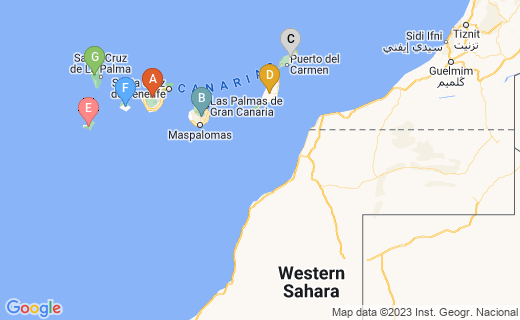 Information on the author, her bio and full body of works available @Suzie HQ

All dividers used in this hub are used with permission granted on hub, Creating Dividers to Use on Your Hubs