In not many places in the world can you find a true "Christmas Parade," but here in Bend, Oregon, that's what it is, and what it always has been!

The Bend, Oregon Christmas Parade takes place each year either the weekend following Thanksgiving, or the first weekend of December. For many in the region, its the kick-off for festivities that last all month long, including the lighting of the town's Christmas tree! The parade winds right through downtown Bend and past iconic Drake Park, along the Deschutes River.

The community event is a favorite among locals, and those that are here visiting over Thanksgiving break. Its also the start of the annual 5K Jingle Bell Run, which raises money for The Center - Orthopedic and Neurologic Research - and arthritis research generally.

Unless otherwise noted, all photographs in this hub are the property of Stephanie Hicks. Please contact me for permission to use.

As a runner, I have to say that I love the fact that the Bend Christmas Parade is kicked off each year with the start of the annual Jingle Bell Run. The 5K (3.1 mile) event starts at 11:45 a.m., right before the first floats and marching bands take the street. Spectators lining up in the chilly December air know that the parade is about to start when they hear the jingle, jingle, jingle of the runners heading down Wall Street!

The Jingle Bell Run/Walk raises money for arthritis research. Its an easy, fun run that many participants do in costume. It's a great way to get in the holiday spirit!

Where to Watch the Bend Christmas Parade 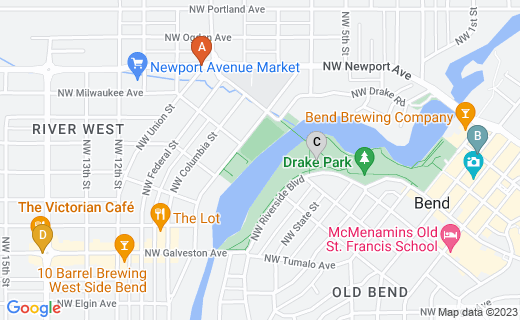 Where to Watch the Bend Christmas Parade

The Bend Christmas Parade starts at the corner of Newport and Harmon, winds through a portion of downtown along Wall Street, and then heads down Riverside Avenue next to Drake Park, to the parade's terminus along Galveston Avenue.

The total parade route is about 2 miles, and the parade lasts about 90 minutes.

No matter the weather, many people love to come out for the Bend Christmas Parade. In Central Oregon, we normally have cold weather, and even snow by early December. Be sure to dress warmly, and bring a cup of coffee or hot chocolate to warm your hands.

The best places to view the Bend Christmas Parade are along Wall Street (downtown Bend) or along Riverside Avenue, near Drake Park. Bend offers free parking for 2 hours on weekdays and weekends, which is nice. But community events like this holiday parade bring out a lot of people. My advice is to get there at least 1 hour before the start of the parade to park, walk and get a great spot along the street!

Its easy to prepare for the annual Christmas parade! Bring a few foldable chairs, several blankets, a thermos of hot cocoa and your camera. Christmas songs will entertain you all afternoon long. Local high school marching bands, cheer squads and a number of other non-profit organizations march in the parade.

News media always cover the event, as well.  Be ready to be interviewed or photographed by print media or television stations.

The City of Bend has about 80,000 that live in the incorporated areas. Its within Deschutes County, which includes the cities of Redmond and Sisters, as well. The Central Oregon region now has about 200,000 people living in the tri-county region (Deschutes, Crook and Jefferson counties).

Bend is a "big" small town. Its easy to get from place to place (I have a 5-minute commute to and from work), and you'll frequently run into people you know, whether you're checking out books at the library, or grabbing some coffee at Jackson's Corner.

Events like the Bend Christmas Parade really draw the community together. Its a celebration not only of the season, but of the wonderful, friendly place we live in!

Just check out the fun video above! Members of the community organized the Bend Christmas Parade flash mob, practiced dance moves in secret and then stunned onlookers during the beginning of the 2009 parade.

So much fun! (you may even spot yours truly dancing out there on the streets!)