Florence, Italy: Bernardo Buontalenti- the Father of Gelato and so Much More!

C. De Melo is an author & art historian in Florence who specializes in historical novels set in Italy.

It is a widely known fact that Bernardo Buontalenti invented gelato. A favorite of the Medici court, Bernardo was responsible for planning sumptuous banquets at the Palazzo Pitti. His delightful frozen custards were known to please the palates of 16th century guests. Made with milk, eggs, sugar, and vanilla, many fine gelaterias in Florence still offer this simple, yet decadent, treat.

Last year, while writing ALLEGRA (the sequel to my bestselling Renaissance Fiction novel, SABINA), I did a lot of research on 16th century Florence. In doing so, I discovered that Bernardo’s talents far exceeded the realm of culinary delights, and the goal of this article is to shine the light on a true Renaissance man.

Gelato was invented in Florence, Italy!

Learn more about Buontalenti and the Medici in this beautiful novel set in Renaissance Florence. 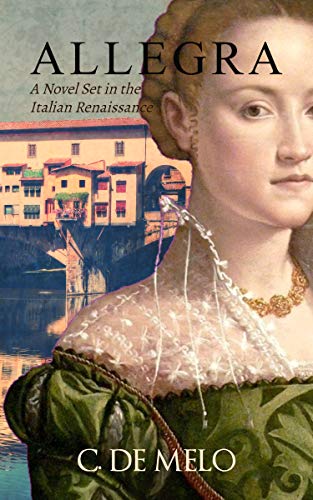 Allegra: A Novel Set in the Italian Renaissance
Buy Now

Born in 1531 and christened Bernardo Timante Buonacorsi, he lived in the Oltrarno on Costa di San Giorgio. In 1547 a landslide destroyed fifty houses on Via de’ Bardi, killing twenty people. Unfortunately, Bernardo’s family were among the victims. He alone survived the ordeal, remaining trapped in the rubble for days.

Interestingly, the palazzo on Via de’ Bardi #36 belonged to a branch of the Capponi family, and was commonly known as “Capponi delle Rovinate (Ruined).” The palazzo overlooked the hillside of Costa di Magnoli (also called “Poggio delle Rovinate”) where large slabs of dirt frequently crumbled off, sometimes damaging property. Not far from this palazzo is the small church once known as Santa Lucia dei Bardi or “Santa Lucia delle Rovinate” due to the many landslides.

Moved by the young man’s traumatic ordeal, Grand Duke Cosimo I took the orphaned Bernardo into his home where he became a mentor to the Medici heir, Francesco. Bernardo displayed significant artistic talent and creativity, and was schooled by some of the most respected artists of his day. Among his teachers were Bronzino, who taught him how to paint, Michelangelo, who taught him how to sculpt, and Vasari, who taught him architecture.

Bernardo truly flourished in the field of architecture, which is not surprising given that his math skills were known to be exceptional. He designed gardens (he collaborated with others on the famous Boboli Garden), fortresses, and villas. His real claim to fame in architecture came in 1568 with the gorgeous palazzo of Bianca Cappello on Via Maggio.

As if all of these accomplishments were not enough, Bernardo also built stages and designed whimsical costumes for the Medici family theater productions to entertain both foreign dignitaries and the local nobility.

I sincerely hope you come to Florence one day and see the incredible sights. Thank you for reading!

The Lovely City of Florence