Are you one of many who enjoy the natural wonders and beauty of nature? There are fifty-eight national parks nationwide there in the United States; many such as Acadia, Carlsbad Caverns, Yosemite and the Grand Canyon are known world-wide. Others such as Hawaii's Volcanoes National Park, Denali, and Joshua Tree aren't as well-known. Here are a few national parks that are popular with travelers; all of them have rugged natural beauty and numerous activities available to all park visitors.

Acadia is located in the state of Maine on the Mount Desert Island. This park is known for its granite cliffs contrasting its sandy beaches and mountains in the mist of the sea. The terrain of Acadia varies from meadows and wetlands to dense evergreen trees. What makes this park special is the ever presence of the ocean; it can be seen, heard and smelled though out the park; this creates a unique outdoor experience providing the sounds of the ocean with the beauty of evergreen forest. One activity that is popular and can be done in less than half a day is the drive around the 20 mile park loop; this is perhaps the quick and easy way to see some of this park. Arcadia is an exceptional park with camping, hiking, shopping, lodging and of course great park facilities.

Carlsbad Caverns is located in southeastern New Mexico, in the Guadalupe Mountains. This park was first made a national monument in October 1923; later in May 1930 it was designated a national park. At present, this park is over 46,500 acres in size and has 80 plus caves. Carlsbad is know for its underground chambers and its limestone stalagmites and stalactite. One of the chambers is called the "Big Room"; this room is thought to be the third largest in the United States and the seventh largest chamber in the world. Big Room measures 4000' long by 625' wide and 350' at it high point. To this day, the caverns are being explored; some recent finds include the Guadalupe Room(1966), Bifrost Room(1982) and the Chocolate High in 1993. The temperature inside the cavern remains a steady 56 degrees year round. Carlsbad can be reached by elevator or by walking the trail to its main entrance. On the surface, there are a few hiking trails and a unpaved drive giving access to the desert scenery. In a detached area of the park, is the Rattlesnake Springs Picnic area; this area is an oasis of wildlife habitats. Also, there are 300 plus species of birds documented too. If you are into cave exploration, and bird watching in a desert environment, Carlsbad Caverns is the place to visit.

One of the oldest national parks is Arizona's Grand Canyon. The Grand Canyon itself is not the park, but is located in the National park; In January 1908, the Grand Canyon was made a national monument; later in February 1919 it was made a park. At 277 miles long, four to eighteen miles wide and over a mile deep, the Grand Canyon is a natural wonder. With its hiking trails, this is the place to see for the outdoor-enthusiast. In addition to the regular sightseeing along the southern rim, there is whitewater rafting and helicopter tours. The north rim has a higher elevation and is believed by many to have a better view. The south rim is more convenient to main entrance and visitor center. If you would like to explorer some of the old architecture & ruins, the Watchtower (build in 1932) is available. The newer Sky-walk is available too. If you are in good physical shape, a good way to see the canyon is to hike to the bottom. If you are unable to hike mules are available . For the truly adventurous a hike to the bottom and rafting on the Colorado is an experience to remember.

With trees as tall as 335 feet, Redwood National park is a nature lovers cathedral; Located in Northern California, this is the place to go to see the largest living trees on the planet. At Redwood you will find a variety of trails to match your schedule and interest. If you are a mountain biker, you have the choice of paved or dirt roads. If you are into boating, there are world class water ways close to Redwood. Nature lovers will enjoy the variety of wildlife and three hundred plus species of birds too. Redwood is home to some endangered species of animals including the Brown Pelican, Bald Eagle and the Northern Spotted Owl. Other animal sightings include black bears, mountain lions, beaver and elk. Off the coast Gray whales and Dolphins are seen from time to time. In addition to the trees, Redwood has its share of rivers, streams alone with 37 miles of beautiful coastline. Kayaking is very popular along the coast, streams and rivers too. Frequently, those kayaking and canoeing travel the Smith river; It is the longest river remaining in California. Another popular water related activity is fishing. In September 1980, Redwood Natural Park was named a World Heritage Site; a few years later in June of 1983, Redwood was named an International Biosphere Reserve.

Located in Northern Colorado, Rocky Mountain National Park is known for its beautiful view of the mountains; With the evergreen-lined, snow covered mountaintops, this park is a beauty to behold. Rocky Mountain Park is split by the Continental Divide, which gives the east & western parts their unique weather characteristics. The east side of Rocky Mountain is drier, with snow covered peaks, while the west side is a bit wetter and greener. Also, the park has more than 140 lakes and many mountain peaks higher than 12,000 feet. In addition, Rocky Mountain National Park is surrounded by the national forest of Roosevelt, Routt and Arapaho. As for wildlife, the park has a wide variety, including Elk, black bear, coyotes, and hawks; also the headwaters of the Colorado river are located here. Lastly, popular attractions include hiking, fishing and camping..

The Smoky Mountain National park is located near the Great Smoky and Blue Ridge Mountains there along the eastern Tennessee border. In June 1934, this 500,000 acre piece of land was made a National park, making it one of the largest national parks in the eastern United States. With the wide assortment of wild flowers & plants, found along the scenic Blue Ridge Parkway, it is no wonder this is one of the nations favorite parks. Also, there are over 500 miles of trails for hiking, including seventy miles in the Appalachian Trail. Some popular activities include hiking, sightseeing, and fly fishing. In addition, Smoky Mountain is home to a very diverse wildlife population. If you are interested in simple sightseeing of the park visit the Clingmans Dome; it is the highest point in the Park. Smoky Mountain also has historical related attractions including Cades Cove; this is one of the most visited attractions in Smokey Mountain National Park.

Yellowstone is one of the most popular parks in the world; with an area of over 3,468 square miles, you can site-see for days and see only a small portion of what this park has to offer. Forever linked to its name and the active geyser Old Faithful, this is more than just a regular park; it is one of the last remaining nearly intact ecosystems; Yellowstone is.also part of the Greater Yellowstone Ecosystem, which is home to more than 1600 species of trees and plants native to Yellowstone. Also, there are hundreds of species of fish, mammals and birds that have been cataloged there, including a few that are endangered. Herds of bison have been seen roaming the park. In addition to the wildlife, Yellowstone has various recreational activities such as hiking, boating, camping and fishing. When visiting the park most road to the geothermal areas, lakes and waterfalls are paved. During the winter, visitors often use snowmobiles or snow coaches to see the park.

Located in central eastern California, spanning an area of over 760,000 acres is Yosemite National Park. Founded in October 1890, Yosemite was central to the concept of land preservation; this would eventually lead to creation of a National Parks system. Credit for this work is given to people such as John Muir. Yosemite has three groves of giant sequoia trees they are Mariposa, Tuolumne and the Merced Grove. In addition, Yosemite its known for its waterfalls; because of the sheer drops, the park has many waterfalls. Although this park is large, most of the visitors coming to Yosemite spend most of their time in Yosemite Valley, which is one percent of the park.

Arches National Park is located near Moab, Utah; it became a national Monument in April 1929; however it wasn't until November 1971 Arches became a national park. There is a concentration of over two thousand formations that have been carved via erosion. Arches sits on top a salt bed, which is the main contributor to formation of arches, balanced rocks and other formations in the park. Climbing on the rock formations is not allowed; however, some approved activities include backpacking, biking, camping and hiking. This park is home to a diverse wildlife population, which includes scrub jay, peregrine falcon, red fox and mountain lions. If you are into rock formations and observing wildlife in open areas, this park could be for you. Should you decide to visit Arches, please check to see what areas and activities require a permit. Also, some guided tours are available.

Denali was made a national park first under the name Mount McKinley National Park in Feb 1917; later in 1976, the park was renamed Denali National Monument, and was made into a International biosphere reserve. Finally in Dec 1980, the monument became Denali National Park. Located in the state of Alaska, covering more than 9,400 square miles, the park name Denali means "The High One;" Visitors coming to this park enjoy site-seeing, hiking, and mountaineering. Some of the wildlife found in Denali include bears, foxes, caribou and moose; because of the remote location of this National park, it is possible to see what a true wilderness looks like before the influence of man. During the winter months some popular activities include dog-sledding and skiing. Denali is one of the true unspoiled gems under the care of the United States National Park service.

Established as a National Park in 1916, Volcanoes is truly unique among the national parks. Volcanoes is the result of thousands of years of volcanism; the volcanoes Kilauea and Mauna Loa are some of the main attractions in this park; not only does Volcanoes gets the attention of locals, it has attracted the attention of the international community; in 1980 Volcanoes National Park was made an International Biosphere Reserve. Later in 1987, it was designated a World Heritage Site. The park is over 500 square miles in size, with half of the park undeveloped for various outdoor activities such as hiking and camping. In addition, the park is home to diverse species of wildlife, which makes it a unique Hawaiian ecosystem. A word of caution about this park; please remember this national park is close to active volcanoes. Please wear durable shoes and stay on the main trails; If you have breathing problems or have small children, please exercise caution when you are close to the volcanoes. With caution and common sense, a visit to this national park can be a memorable vacation experience. 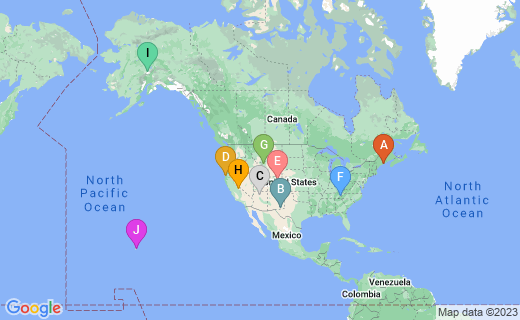 There are many great parks in the United States, I wanted to mention a few more.