Best Attractions Along Route 40 in Missouri, a National Road Trip

Parallel State Route 40/Interstate-70 takes you 250 miles through the state of Missouri, beginning at the eastern border with East St. Louis and St. Louis.

The western end point is found in the Two Kansas Cities, one each in Missouri and Kansas, but actually one large city covering parts of four counties.

There are famous arguments about famous Wild West shootouts and on which side of the street and in which Kansas City these gunfights occurred, making the town(s) even more interesting.

The trip from St. Louis to Kansas City is roughly 250 miles and takes about four hours by car. 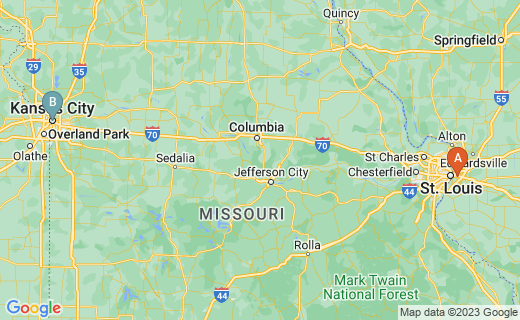 Many Route 40 guides on the Internet offer sites where something "used to be" along the highway, with most of the spots not marked in any way. however, there are hundreds of places to visit along Route 40. Even some of the old motels from the "car vacation era" of the USA are still intact.

When the automobile became a popular American possession after World War II, national highways were named and summer vacations became a national treasure. These vacations took people through the National Parks System and along famous highways like Route 66 and Route 40 by car.

The motels, autos, and small towns along these historic and kitschy highways are commemorated in the Disney films Cars and Cars 2. Related photo and postcard books can be purchased showing the sights seen in the 1950s and 1960s.

Of the four major metro areas in Missouri, three lie along the National Road, Route 40: St, Louis, Columbia, and Kansas City. Springfield, the fourth, sits just to the southwest on Route 66. Travels to Missouri have been some of my best experiences and the Mother Road, Route 66 through the state offers an additional agenda for vacationing.

Eastern Gateway to St. Louis and the American West

St. Louis and its Arch symbolize the portal to the American West ever since the Louisiana Purchase became part of our country. The area around the Arch has developed widely in the last few decades to become a heavy tourist draw on the Mississippi River spanning about a mile in in the North-South direction.

East St.Louis in Illinois is a gateway to St. Louis, Missouri on the National Road (Rt. 40) or Route 70. Olympic Athlete Jackie Joyner-Kersee works with youth in athletics at her own foundation's center her and her Jackie Joyner-Kersee Foundation complex gives youth, adults, and families athletic lessons to improve their lives in East St. Louis.

The center includes 37 acres and has a tech center and science labs as well as track and field and swimming venues. Her success in this campus has surpassed that of the After School All Stars enrichment programs, part of the Inner City Games across the nation.

Jackie has been voted the World's Greatest Female Athlete of the 20th Century by Sports Illustrated for Women, passing Babe Zaharias (#2), who seemed to participate in all sports and often won against the men in golf until her death in 1956 at ge 45. Born in 1962 and named for Jackie Kennedy, Joyner-Kersee retired from sports in 2000 at age 38, but trains youth and families in her own gym.

The Jefferson National expansion memorial is also on the Illinois shore of the Mississippi River, across the water from the St. Louis Arch.

The Eastern Gateway to Missouri 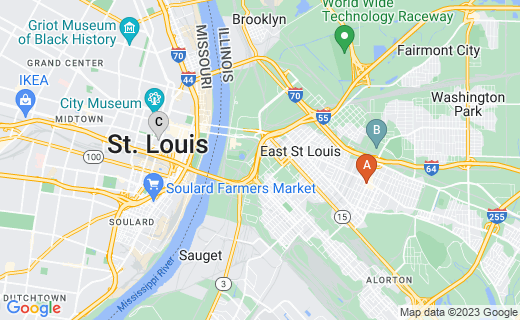 Jefferson National Expansion Memorial is located on both sides of the Mississippi in the central city of St. Louis and east St. Louis. Interstates 44, 55, 64 and 70 meet near the park and US 40/I-70 run across the Poplar Street Bridge to the park. The Museum of Westward Expansion near the Gateway Arch contains a number of old artifacts form the days of the Lewis and Clark Expedition.

Several bridges of interesting architectural style take you into St. Louis, but if you fly into the airport, the approach gives the illusion of the St. Louis Arch spinning. The city is a fabulous place full of culture, history, sports, shopping, dining, and other attractions that include museums and zoo sitting around Forest Park, the site of the 1904 St. Louis World's Fair. Click on the link to see more about the Arch and Arch Park and to learn the location of dozens of St. Louis sights.

One installation you will enjoy is the Museum Of the Dog at 1721 South Mason Road in West Saint Louis, MO and Phone (314) 821-3647. You can see all sorts of pedigreed dogs celebrated by the American Kennel Club and your dog is welcome to join you on your visit, on a leash. A dog park, treats, and water are provided. 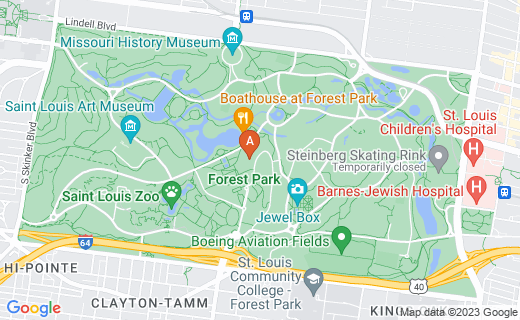 The last time I went to Forest Park, I spent the day and evening in the museums, the green space, the zoo, the planetarium, and nearby eateries. Fun! 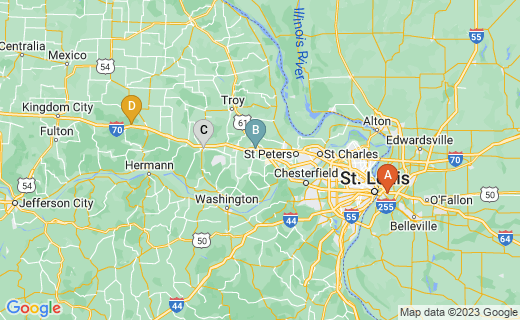 St, Charles, O'Fallon and Wentzville are northwest suburbs of St. Louis that are growing and expanding in populations, jobs, and business. They are some of the best places to stop for sightseeing as well and have many places to relax and eat.

Beginning at Wentzvville and heading west, you will find history from the 1950s back to the American Civil War at these places:

This designated conseervaton area and the August A. Busch conservation area lie southeast of St. Louis and Wentzville along Parallel US Route 40/I-64/US Route 61 south of I-70/Route 40 at the Wentzville exit. The Busch area is named after the long time brewing family in St. Louis. Hiking trails are abundant in both areas, among wildlife and native plants and trees.

The Meramac Caverns in Missouri are off Route 40 and present memorable undergound entertainment for the family. Kids love the place, with its caverns and magical colored lighting - some caves play music as well.

Well trained park rangers take visitors on guided tours and tell great stories along very well lighted walkways. You can learn how a seven-story mansion was built underground, for one of many items; and, how a couple won a honeymoon from TV's Art Linkletter long ago if they agreed to dress as cave people and entertain guests to the caverns.

Special events include concerts, Easter services, lantern tours and a lot more, all in ADA appropriate surroundings so that eveeryone can enoy the caverns. In addition, the cavns maintain a nearby motel at reasonable rates, a campground, and nearby canoe rides. 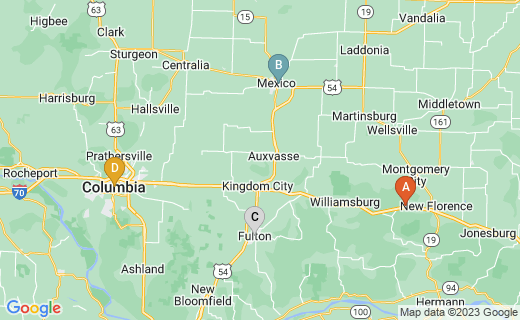 Mexico was supposedly named by newcomers finding a broken down partial sign that said "Mexico" and they left it for the town's name.

The University of Missouri Ashland Wildlife Research Area‎ is found near to Cedar Township and Fulton, before you arrive at Columbia MO.

Mizzou, a University and a Garden

The University of Missouri at Columbia is the largest local research university. Founded in 1839, it is also the first public university west of the Mississippi River and the first state university founded in the Louisiana Purchase.

At this writing, the school offers at least 280 degree programs, with 75 online degrees available, all the way through PhDs, MDs, and DVMs.

The campus in Columbia is a designated botanical garden, with several buildings preserved as National Historic Sites.

Some of the school's most forward looking programs include Food for the Future and Sustainable Energy. An associated university researcher has won the National Medal of Science for developing the successful Boron Neutron Capture mode of cancer treatment.

Historical walking tours of the campus area are available with a brochure to match. Visit the many sites around campus and enjoy the observatory, reptile/amphibians installation, architecture, museums, garden spots and sites of other types. 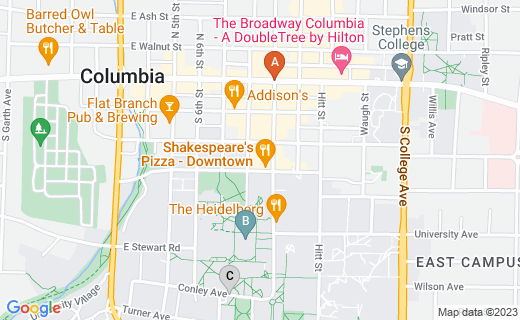 This is the central part of Columbia, situated in the center of three different colleges. Everything happens in The District: shopping, dining, entertainment, culture, and sports. Five different regions keep everyone busy and happy. These are West End Flat Branch, the Government area, North Village, and the Strollway, with Broadway running East-West through the center.

The historic Missouri Theater is located at 203 South Ninth Street in the Strollway and is still in operation. The huge art deco Novus bookstore sits at 22 S. Ninth and dozens of other attractions will keep you busy all day.

Mizzou's Avenue of the Columns that represent the university's core values runs along Eight Street North-South through the center of The District, while Stephens College and Columbia College are nearby. 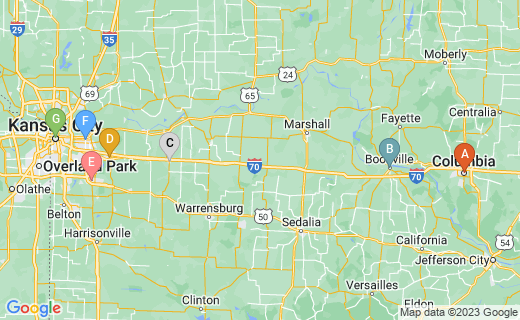 The Katy Trail State Park is the longest rails-to-trails conversion in the U.S. It is a 237.7-mile trail that runs thru Boonville & near Columbi

A speedway and lots of missle launch sites make this town unusual.

Last Leg of the Journey