Before I can tell you about the best bars in Relleu, Alicante, Spain it is important to explain a little bit about the history of the town.

Relleu is a village is situated 400 metres above sea level in the mountainous area of the Marina Baixa, 20 miles or so inland from both Benidorm and Alicante in the Valencian region of Spain.

Nestled between three high mountains - Cabezón de Oro (1207m), Sierra de la Grana (1112m) and Sierra del Aguilar (889m), the name Relleu translates as 'relief'. There is evidence of continuing habitation in the area going right back to the Roman occupation of Spain in the 1st and 2nd century BC. Indeed the Romans are credited with establishing the town on its existing location at the end of the 1st century BC. There is evidence of another earlier settlement nearby, but this in a geographical area that even today is difficult to traverse, so it's no surprise that the area was abandoned.

Modern day Relleu is a bustling town with an eclectic mix of old and new dwellings. The old townhouses (some dating back to the 14th century) are mainly in the heart of the village where narrow winding streets built for horses still dominate the landscape, making driving cars through the streets difficult if not impossible, while the outskirts of town are filled with brand new modern urbanisations (housing estates) giving the town a fresh and new look to the casual visitor.

The population of Relleu was on the decline as its young folk moved away to find work in the cities, reaching a record low of only 717 inhabitants by 1991. The arrival of expats mainly from Britain has reversed the decline, and by 2009 the population had risen to 1262. A massive 40% of residents are now of foreign origin, which causes some resentment within the town.

The Valencianos, well used to feeling repressed under Franco, retaliate in the only way they know, by promoting the local language, Valenciano (very similar if not the same as Catalan) to the detriment of Castellano (the official Spanish language). As a result, many public notices and all fiesta pamphlets are written solely in Valenciano, thus effectively excluding the English speakers from understanding. Even those expats who have made the effort to learn Spanish have trouble understanding what is being said as Valenciano is completely different to Castellano, especially the written version.

So it no surprise to see English bars opening in the village, where expats can relax, speak in the own language without feeling excluded, while watching satellite beamed-in television from Britain.

The best of the bars in Relleu is without doubt the Lemon Tree. Presently run by Chris and Mandy from Grimsby, Lincolnshire, England, it is a tiny little bar situated right at the start of the village as you arrive from the coastal town of Villajoyosa. They have installed Sky television, and have one flat screen on the wall inside the bar, and another outside in the summer months, where you can sit and enjoy a cool refreshing drink while enjoying the hint of a breeze that occasionally whips up from further down the hill beyond the bar.

They show English Premier League Football as well as all major televised sporting events, and occasionally have live music nights or karaoke.

They also serve up English-style meals at reasonable prices.

A lot of tourists stay in Relleu in the summer months and of course the English speakers amongst them orientate towards this bar, attracted by the friendliness of the staff and patrons as well as the English-speaking TV and cheap prices.

The Lemon Tree is the only bar in the village offering 2 for 1 special offers on cheap non-brand name spirits. They also sell English beers and lagers.

Bar Galio as the name suggests is actually Spanish-owned and run, but the staff are welcoming and friendly. I often sit in there during the day because they offer free wifi, and the connection flies.

Situated further down in the village just off the main square, this bar is very popular during fiestas.

They serve a wide menu of Spanish cuisine and tapas, and their coffee con leche (white coffee) is especially nice.

They have Spanish television showing on a flat screen TV on the wall, and play background music all day through their sound system.

Bar Galio is a big bar with lots of tables and chairs, but no outside terrace. In the summer they run air conditioning making it a pleasant place to sit out of the heat of the sun. Their drink prices are reasonable, but I have not known of them putting on any kind of live music at nights.

While Bar Galio doesn't usually offer live music, an impromtu rendition of a popular local song by members of one of Relleu's bands no doubt after a 'few' livens up an otherwise dull evening in the normally popular and bustling Bar Galio.

Bar Lemon Tree and Bar Galio are to my mind the best bars in Relleu, but they are by no means the only ones. Relleu has a total of 12 bars which with the population being only 1300, is one bar for every 108 people, while the alcalde has apparently given the go-ahead for yet another bar to be built next to the football pitches for using during matches.

To finish, I thought I'd leave you with a video of the fabulous Relleu Band playing at a concert. They are quite often to be heard entertaining the crowds at fiestas or other free concerts in the village. 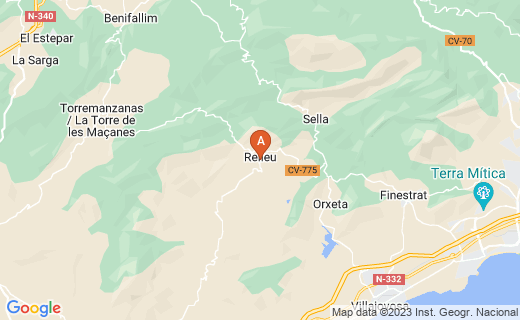