Riding the high-speed ferry back to the mainland after visiting Mackinac Island in August is like being above the Arctic Circle in that at 10:15 pm, the sun is still shining brightly. This is surreal, but gives visitors plenty of daylight to enjoy the attractions on the island before the last ferry returns to Mackinaw City.

The city is filled with hotels, campgrounds offering free shuttle buses, shops, restaurants, grocery stores, and other conveniences. Biggest of all are the myriad fudge and pastie stores.

Riding to and from the island on the ferry, you can enjoy the view of Lake Huron and the giant wind turbines off shore. The only transport to the island is by ferry and on the island all tours are on foot, by horse drawn carriage, or by bike.

The island is automobile free and hundreds of bicycles are for rent. In fact, State Highway 185 is for bikes.

Horse drawn carriages are also popular and a lot of visitors walk. I remember so many of the shops on the island, particularly those that offered Native American and historic Michigan memorabilia.

Three golf courses entertain golfers and one course, Wawashkemo, lies on top of several battlefields of the War of 1812 – 1814. For an in-depth work about this by a British friend, see Hatred Is the Key, about the American/English Holocaust.

The 5-Mile Mackinac Bridge Spans the Straits of Mackinac

I once camped at Mackinaw Mill Creek Camping and rented a site in view of the entire span of the Mackinac Bridge, St. Ignace, the Straits of Mackinac, and a lot of wildlife. In fact, a gull hopped into my tent the next morning, looking for snacks.

The view was beautiful at all times of the day, the camp grounds are clean, the wash rooms and showers are modern, and the office offers a small general store and a game room.

The camping park provided a free shuttle bus to downtown to restaurants and shops at the ferry dock. Everything was convenient. The link below provides details and a video describing how the owners traveled 10,000 miles in USA and Canada, looking for the perfect place for a campground.

Nearly the full island is within Mackinac Island State Park, and parts of it have been First Nations reserve lands as well. Interestingly, the Native languages change so much from Ohio up through the Upper Peninsula that I have difficulty pronouncing the words on signage – like a child attempting to say and spell Mississippi. By the time I get up into Canada and westward across to the Haida, I am completely tongue-tied. All of our North American cultures are so magnificent! Moreover, each one a little bit different in mindset – a different personality.

Take a Ferry to Mackinac Island 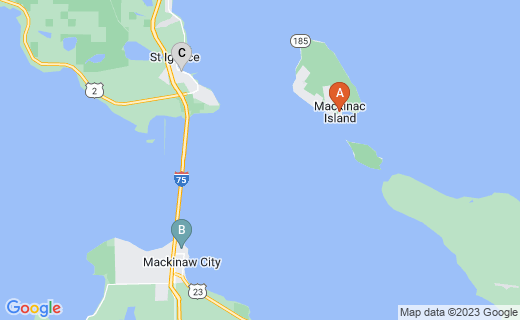 Best of the Attractions

Fort Mackinac State Park presents a Revolutionary War fortress high atop a bluff above the main street and shops. Summer is the season for costumed actors to portray soldiers of the army of the New Nation, America. They tell visitors the stories of island life and current events of 1780 through 1812, when the British captured the fort for the duration of the War of 1812 – 1814. They also portray island life of the post-Revolution days. Cannons and muskets all fire and you may see some marching drills. A Tea Room is operated from the former Officers Quarters, since it is so far back down to the street.

At least 14 of the original buildings stand inside the fort and are hidden by the white walls rising on the bluff 150 above street level. The operational fort was built at the south end of the 5-mile-long Mackinac Bridge and that site sis now a living history museum and costumed actors and demonstrations. The green space and waterfront area at the site are also enjoyable.

For those that like a little Halloween experience, even Mackinac Island can offer it. The Haunted Theater is on Main Street and hosts thrillers from May through October. The live shows revolve around dead folks arising from coffins and jumping out from behind darkened doors. However, Lake Huron is home to myriad legends of mythical lake beasts and these appear in the shows in order to prove their existence. Who needs Nessy now?

Another unforgettable visit is one you’ll take to the Mackinac Island Butterfly House, named one of the Top Three Butterfly Exhibits in America and one of the oldest in operation.

Butterflies flutter all around you and your children and land gently on your shoulder or fingers to make your acquaintance. The admission price is very low and the look of wonder on the face of a young child or an elderly relative meeting a butterfly is worth every cent. Take your camera. (www.originalbutterflyhouse.com/)

Since no motor vehicles are permitted on the island, visitors have a lot of opportunities to meet horses -- Over 400 of them work on the island. Carriages and longer-wheel base horse taxis are available to transport you around the island on tours, your own trips, and even weddings. The island is full of bed and breakfast inns and hotels dating back to the Civil War Era, but the largest place to stay is the redoubtable Grand Hotel, large enough that you can recognize its structure from Mackinaw City. The hotel porch is almost 700 feet long and is filled with rocking chairs.

Olympian and actress Esther Williams, who was married to trumpeter Harry James, often swam in the Grand Hotel’s swimming pool. Many actors from the Golden Age of Hollywood vacationed in the hotel and some of its 360 rooms are themed for these greats, with photos and framed autographs. While the adults are busy with lunch, afternoon activities, and dinner, the children can participate in monitored group activities from island tours to hayrides to their own kid-friendly meals. Straightforward babysitting is offered as well, even for younger children.

The hotel became so popular long ago for visitors who dropped in to enjoy a day on the porch or in the dining rooms that a hotel admission fee became necessary. However, it is deductible from lunch; but you must rent a room to partake of breakfast or dinner.

Package stays are reasonable, with early May and mid-to-late October the most reasonable. Tipping is not permitted and saves an expense. For another good place to eat, try the moderately-priced Pink Pony in the Chippewa Hotel at 1 Main Street.

Murder Mystery Weekends are a great lot of fun at the hotel. In addition, a Somewhere in Time Festival honors the movie portrayed in this locale and it is well attended. If you are a fan, you will enjoy it. The hotel adopts the theme of the festival for a special weekend and film fans enjoy the related activities as well as the peace of the waterfront and the sound of horses’ hooves in the streets in the morning of a different century.

I was not able to see the entire island in only one day and hope to return soon; so many other attractions for singles, couples, and families are waiting. The area is cooler than the Lower Peninsula in summer and is refreshing for any vacation.