RAP/PAP (Restricted/Protected Area Permit) is required to visit the following areas of Nagaland:

The 16th state of India, Nagaland (land of the Nagas), is a tribal state in the North Eastern Region of India. The state’s entire east is bordering with Myanmar Kohima is the capital of the state.

There are 16 officially recognized Naga tribes in Nagaland. Colorful life and culture mark each of these tribes. These 16 tribes are actually different and unique in their own customs and traditions.

Besides Hindi and English, there are about 16 tribal dialects in the state. The dialects of the Nagas differ from one tribe to another and even from one village to another. However there is a common language for all the tribes. Nagamese, their common language, is a hybrid of Hindi and Bengali.

Nagaland may be described as a ‘conglomeration of village republics’. Each village of the 1,317 is an epitome of the ancient Greek city states with its own definitive population, area and administration.

This remote hilly area is covered with luxuriant vegetation. The people of the state are known for their hospitality. 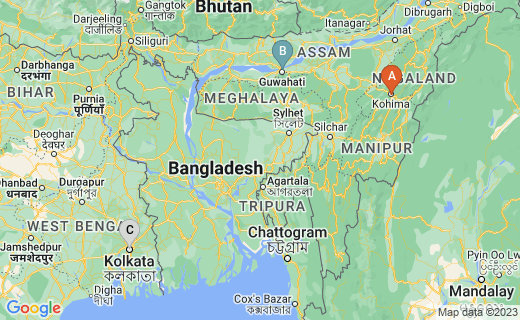 How to reach Nagaland?

Kohima, the capital of the state is named after “Kewhira” which is the name of the village where Kohima town is located. It is so called because the English could not pronounce its original name.

A decisive battle of World War II was fought on the Tennis Court of the British Commissioner’s House in Kohima. It stopped the Japanese advance in 1944.

Dimapur: commercial capital of the state

Dimapur is in lain area adjoining Assam. This is a growing commercial town of the state. It is the only place in Nagaland that is connected with both railway and airline.

Dimapur Airport is the only airport in Nagaland. Direct flights connect the airport to Guwahati and Kolkota and connections can be made from all other airports in India

The famous epitaph carved in the War Cemetery

When You Go Home

Tell Them of Us And Say

We Gave Our Today

Diezephe, a small village on the outskirts of Dimapur (13 km from Dimapur) is emerging as a model craft village. About one fifth of the villagers are engaged in traditional wood craft and weaving.

Dimapur was capital of the Kachari tribe in the past. Reminiscences of the glory of this kingdom can be found in the ruins that scattered in and around the town.

Besides monoliths, Dimapur contains other ruins of temples, embankments and baths

Chui Village in Mon District of Nagaland is home to the Konyak tribe and is full of Konyak culture and tradition.

There is Community museum in the village that houses the numerous animal skulls.

The village is ruled by the Angh of Chui. The Angh's house is the biggest in the village and has a display of skulls of enemies supposedly killed by him and his forebears in the past when headhunting was the tradition of the Konyak tribe