Bloody Island Menorca: What's All This About Then?

Our recent two week vacation on the lovely Balearic Island of Menorca has left some wonderful memories for us and also plenty to write about. Although we visited last year there were plenty of places that had escaped us.

This year is was mostly hot, dry and sunny. When it was it was damn hot and the couple of days we had rain it did that to the extreme also.

We did however manage to visit a couple of new places one being Isla del Rey.

Isla del Rey is situated in the huge estuary that leads into the island's capital, Mahon.

There are other small islands scattered around and at least one of these will be on our hit list when we visit again. Visit again I hear you say? Of yes, god and finances willing we will visit again.

Isla Del Rey has had a checkered past.

It has even had quite a few other names such as King's Island, rabbit island and more recently Bloody Island. Why bloody, well wouldn't you know that part of its history is down to the British.

We had a look at the island as we took the large yellow catamaran tour of the huge estuary. Of course this was only a look from the water as we sailed past. There had even been a rat island close by but that was blown up to make way for a canal.

If the small rat infested island is visible on a photograph it means the said image pre-dates the thirties.

Bloody Island was so named after the British military used it as its base for a military hospital. Enough said I guess.

After the British left the island its building fell into disrepair. The weeds took over and buildings crumbled.

Then a small group of volunteers began an attempt at restoration. Mainly funded by donations and volunteers the people have worked hard to restore the site.

The volunteers come from all over. Locals and more have joined in. Ex-pat Brits have had a role and some people even begun to do volunteer work as part of their vacation.

Most of the volunteers work on the island on a Sunday and surprise, surprise it is possible to visit on a Sunday morning.

Illa del Rei or as it has subsequently been called, Hospital Island is home to one of the oldest Royal Naval hospital in the world. It has been saved from dereliction by a group of volunteers who are not just British, in fact half are Menorcans led by a former Chief of staff of the Spanish Army, General Luis Alexandre". More information here.

We made or way down through Es Castell to the small harbour front where a boat takes visitors across early each Sunday morning.

[Getting there has changed recently so please see postscript]

The Sunday we visited was hot and sunny and it seemed the world and its wife was going to visit the island. The first boat load had set off and we waited a few minutes for its return.

It is only a short journey thankfully.

The vessel is a very large type of motorised dinghy. The majority of passengers, including me sat along the outside edge. A few including hubby stood in the middle of the boat. It was not as hairy as it sounds as it was calm seas and a short journey.

At least four boat loads were taken over plus the yellow catamaran brought a huge party of German tourists along from Mahon.

On arrival we were held up to be shown around by the guides but it ended up a bit of a free for all. If we return we will walk around ourselves. For a first visit the guides are probably the best option though.

The boats leave Es Castell between 8.30 and a.m. each Sunday during the tourist season. At 10 or 10.30am on the island a large hooter sounds and this signals a "bun fight".

There is wine, soft drinks, water and a running buffet supplied. Don't hold your breath though as some people simply stuck to the table edge and did not move until every morsel was gone.

It was reminiscent of an eating competition.

The visit is free and yes that includes the refreshments.

However the volunteers rely on donations and before you go back to Es Castell a collecting tin will be dangled in your face. Wonder if you refuse will they leave you behind?

How much you donate is up to you. It is well worth charging for but the funding is done this way to minimize costs such as taxes. The boats begin to take visitors back from 11am.

Now however the charity is looking for firm commitments from Friends of Isla del Rey. They have done so much work but there is still a mountain to climb. It is already a great heritage site but will be even better when it is fully restored.

Donations have included items and time as well as money. A recent acquisition means that the main building is lit at night. It looks wonderful from the Menorca mainland.

Bloody Island is well worth a visit. There are some rooms in what was the main hospital that replicate hospital wards, a church, the pharmacy and more. The grounds are appealing and there are some great spots for snapping that perfect image of the mainland.

Images from our visit

The yellow catamaran which operates out of Mahon has taken over visits to the Isla Del Rey.

The yellow catamaran website has the following information June 3, 2018.

How can I book?

For individual passengers booking is not necessary. It is important to be at the port at least 20 minutes before sailing For groups, a quotation and availability must be requested via e-mail sufficiently in advance.

Online-Tickets are not valid on King’s Island visits. No discounts are applied 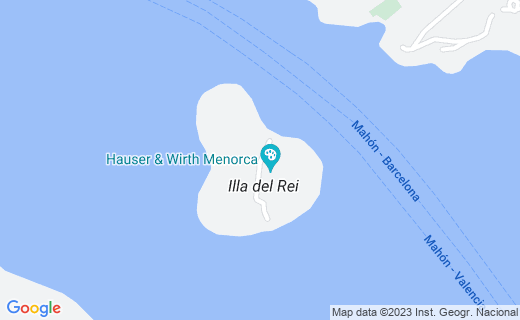