3.7 out of 5 stars from 6 ratings of Blue Wave Adventures Dolphin Tour

There are many things to do in Myrtle Beach, and dolphin cruises are a fantastic option for seeing wildlife off the South Carolina coast. Our family visited Myrtle Beach in the Spring, and we decided to take our two boys on a dolphin tour to see Atlantic Bottlenose Dolphins in the wild.

While there are jet ski tours available, we decided against that type of tour due to the ages of our children (six and four years of age). We didn't like the idea of the large "Sea Screamer" type boats with more than 100 people packed on board, either. We found the best dolphin tour for families with small children through Blue Wave Adventures. They operate a small craft (named The Osprey) with inflatable sides - everyone is safe and dry on the boat, and the tour group size is limited.

The weather in April is quite variable in Myrtle Beach, and the high temperature was only 72°F on the day of our tour. While this sounds warm on land, the tour operators advised us that the air can feel as much as ten degrees colder out on the water. We were packed our sweatshirts, cameras, and sunscreen in a backpack before heading out to Murrell's Inlet.

The water was very placid on the day we took our dolphin cruise. We arrived at the Crazy Sister's Marina in Murrell's Inlet an hour before our tour to eat lunch - the tour company requires visitors to arrive a half hour prior to the start of the cruise. Check-in was very simple and we were told to meet Captain Mark and Amy near The Osprey.

We arrived early for our tour, since our slated time was for 11:30am. Our two young boys generally eat lunch during this time period, so we brought a picnic lunch at ate it at the picnic tables at the Crazy Sisters Marina. This was an excellent idea, as our dolphin tour ran from 11:30am-1:00pm, and our boys would have been cranky if they had not had lunch prior to the trip.

Our boys were thrilled to see the boat, and we seated them on a seat at the stern. My younger son wears hearing aids, and this seat on the boat was more likely to keep his ears nice and dry. Children must be at least 2 years old to take this dolphin tour, and children must be at least 54" tall to ride on the inflatable sides of the craft. Blue Wave Adventures never uses feeding or a technique known as "shrimp netting" to attract the dolphins. They abide by the Marine Mammal Protection Act and are extremely conscientious when the craft nears wild dolphins.

Since the crew does not lure dolphins, there is no guarantee that visitors will see dolphins on any one day in particular. The crew is very knowledgeable about the animals and the area, however, so the likelihood for dolphin sightings is great.

Our tour took off from Murrell's Inlet and we had a fantastic view of Myrtle Beach from the ocean. Within a few minutes, we were surrounded by a pod of dolphins. Captain Mark turned off the motor and we idled while the dolphins swam past. A few dolphins did tail slaps to the water. As the pod moved on, the captain revved up the motor again and took us to a different location.

We spent an hour and a half out on the water, watching the dolphins swim by, viewing different types of birds on the buoys, and seeing several jellyfish in the water. The crew takes visitors on a tour of the immediate coastline, showing guests Drunken Jack's Island and Huntington State Beach. We had a fantastic time showing our children the wild dolphins and getting a thrilling ride on the boat. The wind was quite cold out on the ocean, and we were all thankful we had worn sweatshirts! 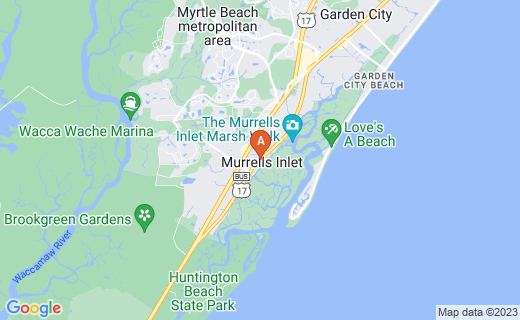