Stephen has been exploring the history, legends, and folklore of his home province of Newfoundland Labrador for the better part of 40 years.

In 1911, to commemorate their 100th anniversary doing business in Newfoundland, Bowring Brothers Ltd., a successful shipping and trading company, offered the city of St. John's a recreational park to give something back to the community for its support over the years. To house this park the company purchased a 50 acre piece of farmland in the Waterford Valley known as Rae Island farm; the Waterford River bordering it to the North and the Southbrook River providing the southern border giving the impression of a small island.

Work on the park began in 1912 and, though the original construction was not completed until 1921 (at which time Bowring Brothers turned the park over to the City of St. John's), was officially opened on July 15, 1914 by the Duke of Connaught.

Over the 100 plus years since its official opening the park has continued to be developed with increased recreational facilities, new plants and flowers, bridges, monuments, and walking trails, and expanded by the addition of adjacent lands purchased by the by the city of St. John's for this purpose, to its current 200 acres. A new outdoor swimming pool facility was opened in the summer of 2017.

In 1995 a charitable organization, the Bowring Park Foundation, was formed to work with the City of St. John's in the preservation and future development of the park.

Bowring Park is located in the beautiful and historic city of St. John's, Newfoundland and Labrador, Canada, just 4.8km (3 Miles) from the downtown core in the scenic Waterford Valley. The park has two entrances: the east entrance is off of Waterford Bridge road and brings one into the park at the duck pond, and the west entrance comes in off of Brookfield Road near the playground and pool area of the park. Driving in the park is restricted to city and park vehicles and those attending functions at the Bungalow but there is ample parking available at both entrances. 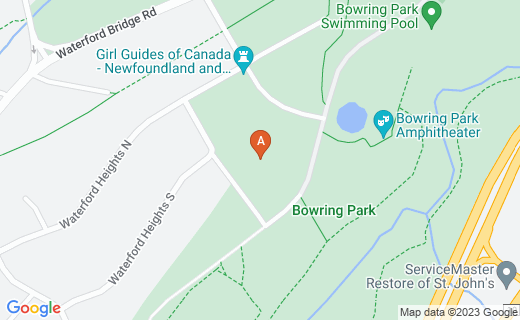 From the east parking lot a walking trail takes one to and around the beautifully sculptured duck pond. On any given day, summer or winter, one will find individuals and families gathered along the banks of the pond feeding the ducks. The pond features a fountain at its centre that is illuminated at night, bridges that cross over the areas where rivers flow into and out from the pond, a trail and staircase that leads up to the Trans Canada Trail, and on its west bank the famous Peter Pan statue. During Christmas all of the trees surrounding the pond are decorated with thousands of holiday lights. In December the city of St. John's hosts the Festival of Music and Light at the pond. For the admission price of a non perishable food item attendees can enjoy free hot chocolate and listen to choirs sing as the lights are officially turned on for the season.

On the west bank of the Duck Pond stands the Peter Pan monument; an always youthful Peter at the top playing his flute while fairies and woodland creations scamper around below. This statue has been, since its unveiling in 1925, one of the most popular and beloved features of the park. It was placed there by Sir Edgar Bowring in memory of his Granddaughter.

On February 23, 1918 John Shannon Munn, the step son of Sir Edgar Bowring, one of the partners in Bowring Brothers Ltd., along with his 4 year old daughter Betty, Sir Edgar's granddaughter, boarded the S.S. Florizel at St. John's bound for Halifax, where they were to meet up with Mrs. Munn and continue on a journey south where, due to Mrs. Munn's ill health, they were to spend the remainder of that winter. Tragically the ship never reached Halifax.

During the night of the 23rd the Florizel met with a terrible storm off Newfoundland's Southern Shore and, in the early hours of the morning of the 24th, was crashed upon the rocks off Cappahayden. 94 of the 138 passengers and crew perished in the icy waters of the North Atlantic, among them were John Munn and his daughter Betty.

Sir Edgar Bowring, in memory of his little granddaughter, commissioned renowned sculptor Sir George Framton to create the Peter Pan memorial. The statue is a copy of the one he had sculpted for London's Kensington Garden's, and one of five in the world. the other three are in Toronto, Canada; Brussels, Belgium; and Melbourne, Australia. On one side of the Bowring Park statue on the pedestal is the inscription, "Presented to the children of Newfoundland by Sir Edgar R. Bowring in memory of a dear little girl who loved the park". On the opposite side it says simply, "Betty Munn". The Statue was unveiled on August 29, 1925.

From the Duck Pond and the Peter Pan statue the visitor can access the paved roadway. Vehicular traffic on this road is restricted to park and city vehicles and those attending functions at the bungalow, and is used more by walkers and bicyclists as an easy way to get around the park. It also makes most of the facilities and attractions wheelchair accessible. The park also boasts several kilometers of walking trails, that range from paved surfaces to forest floor, and take the walker all over the park from one end to the other and to all attractions and facilities. There is also a section of the Trans Canada Trail that passes through the park.

The park also has a large number of bridges due to the fact that it is encircled by two major river systems, the Waterford River and the Southbrook River. Not only are these bridges attractive and functional but a number of them are historically significant. The pedestrian overpass seen in the photo above is an award winning bridge. Designed by structural Engineer Ove Arup, the structural engineer for Australia's Sydney Opera House, the bridge is a unique cantilever design whereby the bridge is only anchored to the ground on one side, it does not touch the ground at its southern end.

Bowring park has plenty of facilities and attractions, with something for all interests and every member of the family. There are recreational facilities such as the outdoor swimming pool, the playground with splash pad, the skateboard park, tennis courts, a soccer field, the Cabot 500 theatre, and Bob Whelan Field. There are monuments of cultural and Historical significance, such as the Fighting Newfoundlander, which was donated to the park by Sir Edgar Bowring in 1922 in honour of the tremendous sacrifices made by the Royal Newfoundland Regiment in World War I. A further tribute to the Regiment is the Caribou statue, a replica of the original located at Beaumont Hamel in France.

The entire park abounds with an incredible collection of flora. Aside from a the wide array of flowering plants, that can be seen in all their splendor from May to October, there is the large variety of rare and exotic plants from all over the world that can be seen at the Conservatory. Also of note is the Weeping Beech tree, a combination of a Weeping Willow and a Beech tree. There is also a White Oak planted by Sir Edgar Bowring in 1920, A Purple Beech planted by Governor General Viscount Alexander in 1949, a Red Oak planted by Princess Mary in 1964, and an English Oak planted by Prince Edward in 1988. Up until September 21, 2010 when it was destroyed by Hurricane Igor, there was a Lime tree that had been planted by the Duke of Connaught at the park's opening in 1914. This tree has since been replaced by one planted by St. John's Mayor Dennis O'Keefe.

In addition to this are many other points of interest such as the old horse trough, Angel's Grove, the park bell, the Bungalow, currently leased to Red Oak Catering, which hosts special events such as weddings and corporate functions, and curiosities like Squire's Well, which is located on the land once owed by former Newfoundland Prime Minister Richard Squires. Purported to be haunted the well has been featured on the popular television program Creepy Canada.

For more than 100 years Bowring Park has provided a beautiful recreational space for the residents of St. John's, and the surrounding communities. A place to go for a swim or a family picnic, to play a friendly game of touch football or toss a Frisbee around, to go for a stroll or feed the ducks, to read a book under a tree on a sunny summer afternoon or explore the history of the park or just enjoy the beautiful flowers, trees, and shrubs that are prolific there. Whatever the case may be Bowring Park has something to enhance the enjoyment of the outdoors for everyone, and should be on the must see list of anyone visiting St. John's, NL.