Claudia enjoys traveling and sharing her travel tips with readers.

About 15 minutes north of Pittsburgh, Pennsylvania lies Butler County. With a fairly large urban area, as well as miles and miles of rolling hills and beautiful farmland, Butler County, Pennsylvania is a rapidly growing county that offers something for everyone.

In 2012, the city of Butler received the distinguished honor of being named the seventh most livable small town in the United States by Smithsonian Magazine.

Founded in 1800, Butler County was named after General Richard Butler, a colonial soldier in the American Revolutionary War. At the beginning of the French & Indian War, future President George Washington passed through the area on an expedition. His route can still be followed today on Washington's Trail, a series of roads which wind their way through Western Pennsylvania.

There is a large German influence in Butler County that remains today. This influence is found in the towns of Saxonburg and Harmony. Like Harmony, Saxonburg still retains its German ambience. It was co-founded in 1832 by John Roebling who designed the Brooklyn Bridge. Today, Saxonburg hosts the Penn's Colony festival which explores life in the mid-1700s. The festival draws over 60,000 people a year.

In more recent history, the original "Jeep" was created and manufactured in Butler, PA. The Bantam Car Company designed it in 1940 for use in World War II. While it was not manufactured in Butler for very long because the government decided to use another car maker for its vehicles, the car left its mark. Every year the city of Butler holds a Jeep festival which draws thousands of visitors along with their Jeeps.

In the 1950s, the city of Butler was one of the first cities in the United States to install bells at cross walks. The city is also home to one of the original Ford car dealerships that was authorized by Henry Ford when car dealers were started.

Today, Butler County remains largely rural with over 1,100 farms, but in the southern end of the county large businesses and factories abound. Some of the county's largest employers are AK Steel and Westinghouse and corporations continue to move into the area.

For the last 150 years the county has been hosting the Big Butler Fair which attracts hundreds of thousands of visitors. The county is also home to a symphony and a number of theaters including the Butler Little Theater.

Cranberry Township, in the southwestern corner of the county, was recently recognized as one of the fastest growing communities in the Northeastern United States.

From colleges and museums to historical attractions and outdoor adventures, Butler County, Pennsylvania offers something for everyone. The following points of interest are just a few of the highlights found in this fascinating county located in Western Pennsylvania.

The Historic Village of Harmony

The village of Harmony was founded in 1804 by Harmonists, led by Johann George Rapp, who were dissenters of the German Lutheran church. Today, the village remains and many of the lovingly restored homes bear historical markers indicating who lived there originally. The museum is a highlight of the town along with the numerous quaint shops. During the holiday season the village hosts a German Christmas Market along with various other events throughout the year.

How did Slippery Rock get its name?

It is said that "Wechachochapoka" or Slippery Rock, Pennsylvania got its name during the French & Indian war after a soldier, being chased by Seneca Indians, was able to escape because the Indians slipped on the rocks due to the moccasins they were wearing. Some even claim that the soldier that escaped was George Washington. Fact or fiction, no one will probably ever know.

Located in the northwestern area of the county, Slippery Rock University (SRU) attracts over 8,000 students a year. It is well-known for its teaching degree and sports degree programs. During the school year SRU offers a performing arts series that often draws big name entertainers. The university is also home to the Robert A. Macoskey Center for Sustainable Systems Education and Research and the Storm Harbor Equestrian Center. The Equestrian Center provides Equine Assisted Activities (EAA) for individuals with disabilities as well as community programs in the summer months.

Run by the Western Pennsylvania Conservancy, Wolf Creek Narrows' spring blooming wildflowers are spectacular and draw visitors from near and far. The wildflowers include, triliums, Virginia bluebells, violets, phlox, spring-beauties and trout lilies. Hiking along the banks of the Wolf creek brings visitors to a narrow gorge and through dense deciduous forests. The trail is 1.5 miles long and hilly, but manageable.

Housing over 800 pieces of Asian art and 300 pieces of Meissen porcelain, the Maridon Museum is a unique museum in Butler County. The artifacts, along with the building, were gifts from Mary Hulton Phillips.

Run by Slippery Rock University, The Old Stone House was built in 1822 as a tavern and carriage stop on the route from Pittsburgh to Erie, Pennsylvania. Today it hosts reenactments, tours, ghost hunts and other fun activities.

What does Relict mean?

Relict means a part of an organism or species that has survived from an earlier time while the rest of it has become extinct.

You might be surprised to know who comes from Butler County. 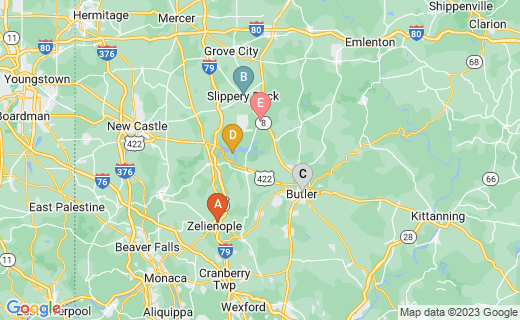 Why come to Butler County, Pennsylvania

A trip to Western Pennsylvania is not complete without a visit to Butler County. There are numerous historical attractions and the outdoor amenities can keep visitors busy for a long time. Many newcomers to the area choose to live in Butler County because of its proximity to Pittsburgh, its reasonable cost of living and the many rural areas.

All in all, Butler County, Pennsylvania is a terrific place to visit and to live in!