Butterfly Creek, a California Winery Off the Beaten Path

Rochelle's interest in California history was rekindled when she began leading tours at a local museum in an 1850s gold rush town.

"Grow, grow!" says Bob Gerken, making a magical gesture toward the orderly rows of budding grapevines. He admits that he talks to his plants and it comes "from the heart".

The smiling, good-humored winemaker of Mariposa County's Butterfly Creek Winery, says,"Chemistry has a formula for almost everything, but not for great wine. A lot of love goes into it."

Gerken demonstrates that love by being in his vineyards almost every morning by 6 a.m., to do whatever the season requires.

Whether its pruning, staking, replanting, drip irrigating, weed control, feeding or harvesting, there is something to do in each month of the year .

He is joined in the fields by Bob Park, whom he describes as very knowledegable when it comes to growing things. Park also takes great pride in the condition of the vineyard.

Their combined attention in the past few years has been focused on getting the vines into optimal condition, rather than on the volume of grapes produced.

"A great vineyard makes a great wine", says Gerken who explained that the vines have been carefully pruned in past years to improve strength and hardiness, at the expense of a somewhat larger crop.

As the season progresses, growing canes are guided over the wire trellis forming a high canopy and allowing air to circulate below the leafy crown. This is especially beneficial to Chardonnay grapes to prevent moisture and mildew from forming on the fruit.

The winemaker says he's learned a lot from fellow members of the local grape growers association as well as from a number of viticulture classes at U.C. Davis. The great thing about the classroom learning, he says, is coming back to immediately put the new knowledge to work.

"Deer nibble a few of the vines, the gophers get a couple, but the rest are all mine", he declares, jokingly enumerating the challenges facing a vineyard operation.

He also contends with bugs, birds and unpredictable precipitation at his 2,900 foot elevation..

An avid weather-watcher, he says that April can be a very scary month. Just as the first tender buds and bright green shoots appear on the dead-looking vines, snow, frost, hail or a combination of meteorological disasters can damage new growth or even wipe out the possibility of a decent yield.

When the worst happens, the cycle of work remains in the vineyards with hope for a better season next time.

Gerken's parents John and Colleen, purchased the 200 acre ranch from a country western singer named Tom Duncan in 1972, and eventually moved there with their young family which soon included seven children. They began to raise cattle, sheep and horses.

John Gerken gradually sold off his livestock, but as his son says, "Dad still liked to get his hands dirty, so he planted the first grape vines in 1982." What started out mostly as a hobby gradually began to grow info a fully ripened wine making business .

A few months ago, an elderly visitor to the winery told Gerken that he had owned the property in the thirties and forties, running a family farm. The man pointed out the still-standing stone chimney and foundation of his former house, and said he was glad to see the land was still being used for agriculture.

Gerken appreciates that the land has a history of people who have loved it. He has even found a few Indian artifacts attesting to a more ancient habitation.

In 1999 Gerken and his wife decided to " really go for It," and put their energy into full time winemaking. Prior to that time, though they were gradually producing more of their own wine, some of their grapes were sold to other wineries.

Now they use their entire crop. The 23 cultivated acres produce about 40 to 50 tons of grapes per year, enough for three to four thousand cases of wine, including Merlot, Cabernet, and Zinfandel as well as Chardonnay.

Butterfly Creek wines, despite relatively small production, are available in many local stores and restaurants. A growing list of connoisseurs request special shipments of their favorite varietals. The vintage is good enough to be included on the wine lists of Yosemite's Awahnee and Wawona hotels. In fact, the Awahnee ordered a specially labeled Butterfly Creek custom Chardonnay to celebrate the 75th anniversary of the historic hotel.

Crush time, during the months of September and October is also a family reunion. The elder Gerkens come down from their summer home in Idaho . The seven siblings and their families gather to do the work of the harvest.

"Even the kids pitch in," says Gerken who has three of his own and numerous nieces and nephews. "There are about 31 of us all together, and my wife does a fantastic job doing most of the cooking for the whole clan."

His wife, Darlene, also handles marketing for the winery. " says Gerken "we decided to give ourselves big titles. Darlene is Northwest Regional Sales Director."

Bestowing the title of "Vineyard Manager" on Park may have been a mistake he admits with a smile, "because now he thinks he's really important. "

"No," says Park, overhearing the remark as he scrubs down a large wine tank, "The most important job is 'treehouse foreman'," referring to another project on the winery grounds.

As a joke on a new employee, college student Becca Bloom, the Gerkens led her to a large vat of deep purple grapes and told her that her first task would be stomping the fruit.

When she willingly removed her shoes and socks, they knew they had a worker who was willing to jump in with both feet. Bloom at the time was an agricultural business major at Merced College. She says her experience of doing "whatever needs to be done" at the winery taught her a lot about the practical side of ag business, though she now keeps her shoes on.

Ripe harvested grapes are actually squeezed by a state-of-the-art stainless steel crusher-stemmer, but a lot of other processes are done the old fashioned way.

Red wines are "fined" using farm fresh egg whites in a traditional method which removes excess tannins and clarifies the wine. Many premium French wines have used this technique for hundreds of years to pull out suspended particles and organic proteins before the wines are aged.

Gerken says he was not particularly interested in increasing production in his first few years of operation, but he is continually improving methods, experimenting with new ideas, perfecting traditional techniques and basically trying to turn out the best wine possible. 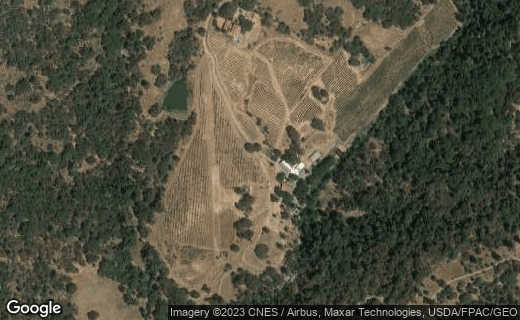 In the tasting room, a display of medals and certificates from various expositions and fairs indicates that the label is gaining favorable recognition.

Though a number of winery visitors stop by on their way to and from Yosemite, Gerken says that an increasing number are making the Mariposa area a destination in itself, to explore the budding local wine industry as well as the historical sites of the Gold Rush era.

Winemaking, and grape growing have some historical roots in the area too, though some of the current wineries in the county have only been in production for a relatively short time.

Wain Johnson , retired director of the U. C California Cooperative extension in Mariposa, says that the climate and soils of this area are very favorable to wine grapes. Throughout his 20 year tenure, Johnson helped to encourage the establishment of new Mariposa vineyards . In that span of time Gryphon Glenn, Radanovich, and Silver Fox, as well as Butterfly Creek wineries have all begun to produce premium wines.

Butterfly Creek is open for visitors Tuesday through Sunday between 10 a.m. and 4p.m. for tours and tasting.

Those who bring a picnic lunch can enjoy the shaded creek bank in the natural garden setting.

A view of the rising foothills thickly forested with green oaks and pines, surround the acres of neatly staked vines undulating over gentle drifts of carefully tended terrain.

In the cool interior of the huge red barn, guests notice a relaxed sense of order. Uniform stacks of the flax colored oak barrels fill the inner areas. Cases of bottled wine are neatly stacked in the refurbished horse stalls. A blending laboratory with sparkling glass beakers and test tubes. occupies the far corner of the building.

The owners believe that attention to details , especially keeping everything that touches the wine meticulously clean, and making sure the barrels are continuously topped off is key to a properly run winery.

At the crest of one rise in the vineyard, above the budding Chardonnay vines, there is a tiny white chapel built by two of the Gerken brothers in 1988.

It is furnished with antique pews that seat 20 persons. It has occasionally been used for weddings, family services, and as a site for the renewal of vows at wedding anniversaries.

The white steepled structure is dedicated to St. Genevieve in hopes of a favorable influence on the vines.

It seems to be working.