Renz may not be travel junkie, but he is eager to share the places he's visited all for the love of traveling!

After the onslaught of the Mayon Volcano, several towns were buried deep beneath the lava. This terrifying phenomenon became one of the worst natural disasters Philippines experienced. However, although it was pure madness, it created the famous Cagsawa Ruins which is now one of the top tourist destinations in Legazpi.

Check out the panorama shot of Cagsawa Ruins with the Mayon Volcano:

Contrary to what initially comes into mind when we say ruins (just like in the famous The Ruins in Negros Occidental), the Cagsawa Ruins simply look like a peaceful and refreshing park. The main attraction, of course, is what was left of the church after the eruption of the volcano known as the Bell Tower.

For the preservation of the place, there is a minimum entrance fee of P10 (less than 0.25$). Upon payment, you will be given an adorable ticket which may serve as a souvenir already. If you are coming with a group, you will be receiving something like the photo below.

Cagsawa was a baroque-inspired church built by Franciscan friars back in the 1724. After 90 years, it was destroyed (i.e. burying beneath the lava) by the most destructive eruption of the Mayon Volcano leaving only the bell tower and part of the facade of the church behind. There are no photos in the internet which show us the Cagsawa Church before the disaster. However, there is one showing that the facade was once indeed intact with the bell tower.

It is believed that the remaining facade of the church collapsed due to failure to withstand earthquakes. Now, what has remained is the bell tower, as shown in the photo below. These interesting history and facts of the Cagsawa Church made this place highly fascinating and attractive for both local and foreign tourists.

Capture Memories through a Lomo Camera A park was constructed within the area where the Cagsawa Ruins are, thus making the place more prominent, and of course more catering to some picture perfect moments. Here are the top three photo opportunities in Cagsawa Ruins:

Photo with the Cagsawa Bell Tower

The Cagsawa Bell Tower, including the story behind it, was what made the place really famous, so it will be a shame if you won't have your photo taken along with it.

Photo with the Mayon Volcano

There are ideal places within Legazpi where it is awesome to take photos of the volcano, and Cagsawa Ruins is one of those. In fact, this is perhaps the best place to have your photos taken with the Mt. Mayon considering the great view and surroundings.

A trend started wherein you take into account varying perspectives (e.g. optical illusion of size) in taking your photos. To do the trick, you may ask one of your friends to do the sacrifice of taking the shots. However, there are people around who you can ask assistance with. However, these people are expecting monetary tips. As a suggestion, you may want to give tip of P10 to P20 per person in your group. That's generous enough.

For more stories, reviews and interesting things about Legazpi, you may check this out my blog posts about our Legazpi Experience.

Cagsawa Ruins in a Nutshell

There are places that you should not miss going to when you visit Legazpi, and those definitely include the Cagsawa Ruins. Not only will you be mesmerized by the fascinating story behind the ruins, but also be enthralled by the beautiful sights including the famous Mayon Volcano. 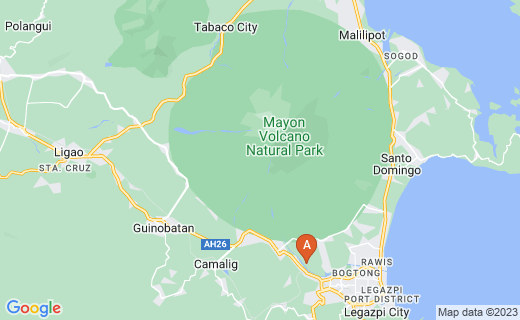