An Abundance of Bees is Always in California

Pinnacles National Park maintains its bee populations even in times of die-offs across North America. Park staff report that 400 different species of bees live in the park.

A Perfect Home for Bees

Throughout the 2010s, we heard much about dying bee populations, along with dies offs and disappearance of the Monarch Butterfly.One episode in mid-2016 included the accidental killing of entire bee swarms when local governments in certain areas of America sprayed the air to kill mosquitoes that carry the catastrophic Zika virus. This was an extraordinary problem.

Luckily, certain US States are doing something about this.

While Ohio aggressively breeds monarchs in places like Blendon Woods along with the milkweed plants they need to thrive, California maintains Pinnacles National Park, where at least 400 different bee species are abundant and healthy.

The California park is home to extraordinary numbers of wildlife and native plant species, all of them thrilling to see.

Strange Bees in the Park

Staff at Pinnacles report that 400 different species of bees live in the park, but that most of them do not live in hives, which seems unusual.

This one park on the American West Coast is the most bee-concentrated place in the world, as far as we know.

The San Francisco Gate Blog has named Pinnacles one of the best national parks to enjoy while confronting only modest crowds. The park is a grand scene of open space and rock formations, native plants, and wildlife; located between Highway 101 and Interstate-5 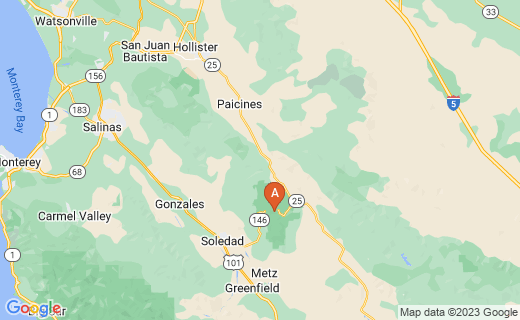 Australia's Steve Irwin would respect Teddy Roosevelt as one of America's original wildlife warriors. Roosevelt ranks with John James Audubon of the 18th and 19th centuries in this aspect of conservation.

The former US president did for wildlife awareness what Edward S. Curtiss did for Native American awareness during the same time period. We have much for which to thank all these men in preserving life.

President Roosevelt began the National Park Service in our country in the early 1900s and for that, he is one of the better known US Presidents.

Succeeding American presidents have approved new national parks into the 21st century and will likely continue to so so. This is a visible opportunity to reclaim lands that have suffered deforestation, strip mining, and climate disasters.

Studying wildlife from childhood, Teddy Roosevelt was a defender of wildlife, native plants, and our natural landscapes during most of his lifetime, as well as being a hero of the Rough Riders during the Spanish American War.

The legacy President Roosevelt left to the United States in our system of parks, monuments, forests, seashores, wildlife refuges, and other protected areas is one of the largest and brightly shining triumphs of any American or friend of the USA in our history.

The Wilderness Warrior: Theodore Roosevelt and the Crusade for America
Teddy Roosevelt was one of the first Wildlife Warriors in modern history, advocating for the land as well as the animals and plants. This is a thorough, awe-inspiring book that I am glad to own. Reading it is like having Teddy sitting at your dining room table or on the front porch to answer your questions and tell his stories.
Buy Now

We the People Save the California State Parks

During The Great Recession the early 21st century, California experienced serious economic turns that placed national and state recreation sites at funding jeopardy. The people of California stepped forward to save many of these sites on their own.

One cost saving measure was to close down or at least withdraw personnel and monitoring of some state parks. This occurred at a low level and residents cooperated to keep many of their parks open, serving as volunteer maintenance crew, monitors, and greeters or guides.

National parks in California numbered 8 at the time of the recession mentioned and were consistently maintained, but in January 2013, Pinnacles National Monument was upgraded to National Park Number 9, 59th for the nation.

It is a bright accomplishment amid uncertain times. 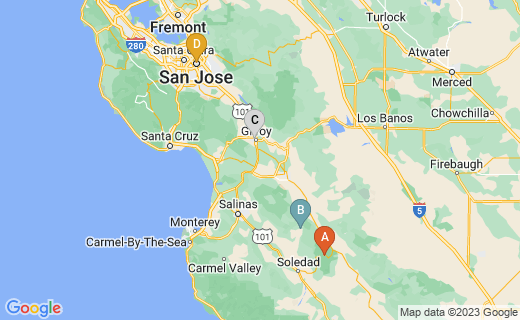 Entrance to the park's only campground is found here, near Hollister.

Try the garlic ice cream, if you have a chance. I found that it is a mild flavor, very interesting and tasty!

To the northwest, San Jose is a little farther up Highway 101.

California not only saved most of its parks from closure during the Great Recession, it enjoyed one park becoming a new US National Park, the 59th for America. California did this with public support, especially volunteer service.

Restorations: Dry Creek Bed Was Once Lush and Will Be Again

What Are the Pinnacles?

This park is an area that the US Federal Government protects that includes mountains east of the Salinas Valley and Soledad in Central California and southeast of San Jose.

The pinnacles themselves are features connected with an extinct volcano that has moved 150 miles, as of the end of 2015, from a previous location on the San Andreas Fault, in the midst of the California Pacific Coast Mountain Ranges.

Much of the park is protected wilderness area, home to many species of birds, bats, other wildlife and native plants. Rock formations are everywhere and rock climbers find this to be one of their favorite venues.

Pinnacles is the first park to be designated on the Central Coast of California and is a welcomed park upgrade. It brings honor to the region and draws an additional number of tourists, scientists, school groups, and photographers to California. In addition, improvements to the park are partially the good expenditures of dollars received from the ARA Stimulus Package Funds in 2009. Some California parks closed during The Great Recession, but the ARA helped many more remain open.

South of San Francisco, this small park makes a good getaway location from work and hectic lifestyles. It is visible as a landmark from Highway 101 and features incredible looking volcanic spires. Gateway entrance cities to the park are Hollister and Soledad. Inside the park itself are two roadways from either entrance, but the roads do not connect, so one may not drive through the entire park.

Pinnacles is best known for its hiking and rock climbing attractions, but caving, camping, and animal/bird watching are also popular. The park contains smaller species of wildlife, except for large predatory birds like the California condor, Prairie falcons, and Golden Eagles, and includes mammals, insects, reptiles, amphibians, birds, and native plants.

Visitors' ratings of this park are very high overall, with most rating the park 5 stars out of 5 possible since 2006. Most of these positive "excellent" and "very good" comments on TripAdvisor highlight the joy of discovering the hiking trails and mountains as well as the fact that the park in an extinct volcano. Camping facilities were given high marks.

Condors and Other Animals

The camping area, with a Condor Viewing Stand, park-maintained shuttle bus and other amenities, and the Visitor's Center are accessible from the east entrance (Hollister) of the park only, off Route 25 on Route 146. See the map below for more details.

The Condor Recovery Program of the state has included this park, taking 22 tagged condors and increasing their numbers to over 400 birds. Still critically endangered, they fly free inside the park and seem to like it here.

The roads in the west side and the east side of the park, both marked Route 146, are about 1.5 lanes wide and do not connect, leaving open green space. Driving around the park from one entrance to the other takes about an hour, if you want to visit both sides.

Caves include Bear Gulch and Balconies Cave areas and maps accompany a model of the park, set up in the Ranger Station at the inner park end of Route 146, just before Pinnacles National Monument off Highway 101 at the west entrance (Soledad). A small secondary Visitor's Contact Center is also located at this entrance.

West and East Entrances To Pinnacles 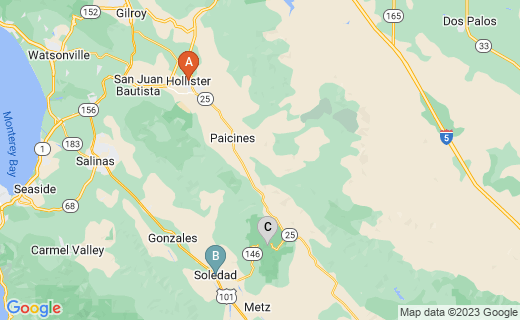 Because of the San Andreas Fault and other faults that lie within Pinnacles, many minor earthquakes occur in the park. Many visitors find it fun to come to the park in search of earthquake experiences and to study information about the geology of the fault lines, tectonic plate movement, and natural landmarks throughout the park left by volcanic activity and its aftermath.

San Andreas Fault lies along the line made by points A-B on the map below, running near the park. Other faults lie within the park itself. 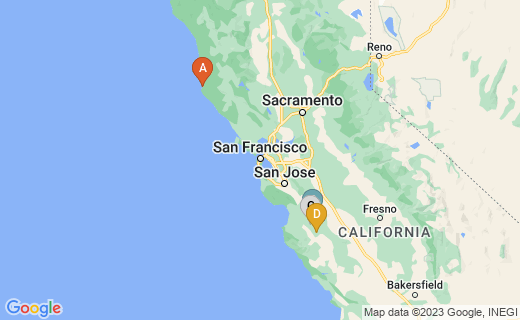 This is the town located closest to the land area of the park itself.

This mountain range is the location of Pinnacles National Park

The cave is located on another fault line as well as being near the San Andreas Fault line that runs down the Coastal Area of the state.

The Park That Moves

President Teddy Roosevelt declared the site at Pinnacles a National Monument over 100 years ago in January 1908. Imagine - this was only five years after the successful powered first flight of Orville and Wilbur Wright. Roosevelt advocated for natural surrounds and life his whole life, starting as a youngster, drawing pictures of wildlife. The national parks became a realization of his dreams for America.

At the time in 1908, the whole monument site was located an average of 200 inches further south than it is currently in the mid-2010s. The park is moving, because of the action of tectonic plates and fault lines.

Pinnacles is moving about one to two-and-a-half inches northward along the San Andreas fault every year. The site began as a volcanic field about 200 miles south of its present location many years ago, so it was once 280 miles south of San Francisco.

These two Native American groups of the California Coast lives around Pinnacles National Park for many years, and artifacts of their cultures have been found in the park. Acorn grinding stones are especially significant, since the park provides many trees that bear acorns and the acorn flour made from them is quite good.

There persists a question about whether native groups lived year-round in the park, because of the intense heat of the summer months of 100° and over, with the lack of any great body of water for cooling. Open land without complete green cover has also been dry and hot for hundreds of years. Later, during the CCC years under President Franklin Roosevelt, Bear Gulch Reservoir was dammed up to gather water.

Spanish missions were built in this area, particularly around Soledad beginning in the mid-1700s and the native way of life was disrupted. Later, homesteaders moved into the area and some of these persons lobbied for protection of the area as a park, which Teddy Roosevelt felt was valid. One of these people built the Horace Bacon Ranch and it still sits at the east entrance to the park, off Route 25. Tours are given of the ranch from time to time.

Narrow passages among the rock formations at Pinnacles were closed overhead by falling boulders over time to become talus caves, the talus being the accumulation of the overhead rocks and boulders.

Mexican bandits like Senor Tiburcio Vasquez used these caves for hideouts in the mid-to-late 1800s. Today, some of the caves are passable to visitors, but flashlights are mandatory.

In the 1930s during The Great Depression, the CCC or Civilian Conservation Corps built many miles of trails, stairways, and bridges through the talus caves that survived long term through all extremes of weather. Like the rest of the park, these features are well maintained and safe. This is the perfect place for a day trip or a longer vacation in the campground. The Presidents Roosevelt would both be pleased.