I have travelled to many places around the world for vacations and also worked in many places too but in all my travels I have never seen such magnificent and unique topography as I witnessed in Cappadocia. Not in all of North America, not in Europe where I have visited Greece, Spain, Italy, France, Germany, Holland, Belgium, Hungary, Bulgaria, Poland, Switzerland, Austria and Romania; not in Asia and not in the far east; and definitely not in Africa.

No Cappadocia has a wonderfully unique and fairy tale topography which has been shaped by the natural phenomena of two volcanoes 350 miles apart erupting simultaneously and spewing their ashes over an area 400 miles long and 200 miles wide; then letting Mother Nature weave her magic over a thousand years.

I flew out of a chilly Birmingham airport located in the heart of England on an early morning flight and five and half hours later landed in a very windy and freezing cold Antalya in South-Eastern Turkey. This holiday was my first fly/coach touring holiday and I must say I was a little nervous not to be able to do my own thing. The holiday had been booked through my pet insurance and it was such a ridiculous price I could not resist it, £400 all in including flights, hotels, meals, and coaches. Antalya is the largest city on the Turkish Riviera, a Riviera which stretches for 800 miles south towards the southernmost corner of the Mediterranean Sea, boasting golden sands and clear blue warm seas. The average temperature in Antalya in March is supposed to be 60 degrees but on the day I arrived it was a mere 37 degrees and very windy. I was introduced to our coach number 367 (this was our coach for the whole week - number 367) by our guide and taken to our hotel in Alanya a small town a couple of hours drive away from the main town of Antalya. My fellow travelers were a mix of interesting retirees including, Welsh farmers, fungi scientists, civil engineers, civil servants, writers, musicians, and other obscure careers. As the days went by I gradually made a few good friends and swapped the odd elephone numbers. During the first half an hour of the drive, before I drifted off to sleep, our guide regaled us with jokes and went through our six-day very grueling itinerary, which he had to change somewhat because of the exceptionally cold weather for this time of year weather. We all arrived at the hotel tired and hungry and after a really wonderful buffet dinner, we all retired to bed, not in the same room I hasten to add. 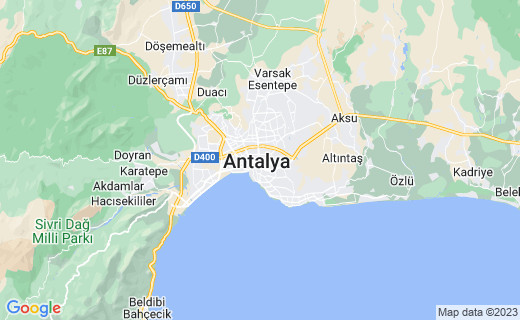 Would you like to visit the location detailed in this hub?

Today was spent visiting a fantastic Roman viaduct and a Roman theatre near Antalya. We also spent time walking around Antalya and visiting the old harbour relaxing in preparation for the long coach ride to Cappadocia.

Everyone was up for an early breakfast to be ready for a departure time of 07.00 for our journey of eight hours through the Taurus Mountains via the amazing 1825 meter high pass through the snow blizzards and fir forested landscape - to the Cappadocian city of Konya which sits in the middle of a completely flat plateau on the other side of the mountains. The plateau is flat because it is in fact an ash plain from the ash deposited by two erupting volcanoes During the afternoon we visited the magnificent Whirling Dervishes Monastery which is now a museum and place of pilgrimage. This museum was magnificent in its imposing architecture and books of the Koran which were written two thousand years ago.

We visited one of the 400 mysterious underground cities (Kaymakli) - some of which were eight stories deep. In these cities lived the Hittites and Christians where they hid with their animals to avoid religious persecution by the authorities of the time. Some cities were home for over 2,000 people and were a maze of underground tunnels and rooms. The land being all ash made it easy to dig deep below the surface. Ash has a hard exterior but once that is breached you can dig using a teaspoon. We eventually arrived to the warmth of our very nice hotel in the Cappadocian city of Cavusin. The temperature all day had been a cold minus 4 degrees Celsius but in Cavusin during the night it fell to minus 14 degrees Celsius.

We boarded our coach 367 once more and headed for Goreme the UNESCO World Heritage Site. This was still the area which had been formed through the eruption of the two volcanoes 350 miles apart and which created a fertile landscape of giant fairy chimneys formed by the weather and wind on the sandstone and ash deposited on the Anatolian plateau. This area had many churches, monasteries and homes built into hillsides - many with beautiful wall paintings. We then partook in a Turkish traditional cup of tea in a small village nearby. Afterwards we were taken to the Whirling Dervishes School to witness a religious ceremony performed by a Dervish traditional band and four Dervishes with their religious leader. Unlike the Whirling Dervishes which are for tourist’s eyes only and whirl at high speed, the real Whirling Dervishes are a religious sect and whirl slowly and gracefully in a trance with eyes tight shut. We then returned excited, tired and cold to the warm embrace of our hotel.

This morning some of the tour group were stricken by a strange affliction which affected most if not all of our party. We started the long journey back to Antalya where thankfully the weather had improved and the temperature was a mild 18 degrees Celsius.

The following day we were taken to a jewellery manufacturer, a carpet manufacturer and a leather factory where we witnessed a fashion show and had the opportunity to buy traditional Turkish jewelry, soft leather clothes, and magnificent woolen carpets. Few of us spent our money although it was tempting. The rest of the day - after lunch - was spent walking around the old town and the port of Antalya in the warm sunshine. Then back to the hotel for an early night. After a few hours’ sleep. I contracted the same sickness during the night as many of the other fellow tourists had. So when I was woken at 3 am for our journey to the airport the tour guide seeing me so ill gave me an old Turkish remedy which was a hot Turkish coffee laced with a lot of lemon juice. Strangely enough, I did begin to feel a little better. However, the journey back to the UK. was somewhat blurred. But although the last day was disappointing I would not have missed this trip for the world.

Wonderful and exotic Cappadocia from a hot air balloon