This Chapel is in Rhos-on-Sea in Wales

I was in Llandudno in North Wales on holiday when I accidentally came across a delightful little village called Rhos on Sea. We drove along the coast for about ten minutes and were greeted with a harbour of small boats and a small beach. As I was walking by the sea I came across this chapel of St Trillo.

St Trillo's Church is a beautiful building. It is built with stone and mortar and is eleven feet by eight feet. It has two stained glass windows in which St Trillo and St Elian are depicted. The walls are two feet thick.

The alter in the church was built over a holy well. There is a removable stone slab for easy access. This well was used for baptisms for centuries and the water had a reputation as having great healing powers. It was around 1896 when the chapel was restored to its present state.

There is enough room for the alter and the chapel contains six seats. Visitors can enter the chapel every day as it is left open. Once inside you can look at the stained glass windows and sit down on the wooden chairs. There are small prayer request sheets that can be filled in and left on the alter. Services are held here every Friday at 8 am and Sundays at 11 am.

Over 1,500 years ago he was a Celtic monk who came from Brittany. He built his cell there because there was a natural spring water well which he could use. He preached to the local people in the area including the farmers and fishermen. Rhos on Sea Lies between Llandudno and Colwyn Bay in North Wales

It is known as Llandrillo-yn-Rhos in Welsh. This is because it is named after St Trillo the monk who built his cell there which is now the site of the chapel. He would have built an enclosure around it where he could plant food and keep livestock. These enclosures were called Llan in Welsh. Rhos means a marsh so it became know as Llan of St Trillo by the marsh.

There used to be a large 1,500 foot pier in the fishing village. During World War two the pier had a lot of its wooden planks removed. This was done to make it harder if the Germans invaded Wales and wanted to use it to land their troops. They were not replaced after the war and the pier became a ruin and dangerous. The pier went on fire and was badly damaged, it was demolished in 1954.

The Sinking of the Steamboat Rhos Neigr

In 1908 on 20th July a ship, the Rhos Neigr, was about to dock at the pier when it got into trouble. All those on board were rescued before it sank. In low tide the wreck of the ship can be seen from the promenade. The Anchor from the boat is on display outside the Fishing Tackle shop beside the old pier entrance.

There were two fishing weirs in Rhos-on-Sea. These were made out of stone and wicker fencing and shaped like a V. When the fish swam in during the high tide they got trapped there when the tide went out. It was a very effective way to catch fish.

In 1850 there were over 35,000 fish caught in one night. Unfortunately too many fish were being caught all over the country. So in 1861 the British Parliament passed a law that they all had to be destroyed. One of the Weirs was demolished but the other one survived

When John Parry Evans owned the weir he trained his terrier Jack to go into it and retrieve the fish. This was such a novelty that Jack became very popular with the local people. When word got around about Jack he became a tourist attraction.

But one day in 1873 Jack jumped into the weir and was bitten by another shark that was trapped. He died of his injuries. John Parry Evans was the last owner and the weir was later left to decay. The remainder of the wooden structure in the water became a danger to the boats so they were removed. If you walk along the pier at low tide you will be able to see what is left of the stone part of the weir.

Rhos on Sea has a harbour which holds lots of small boats. The rocks surround the harbour and protect the boats. It was made because the village was getting flooded when there was a high tide. It is there for a practical purpose but makes the harbour look very nice.

Have you visited Rhos on Sea 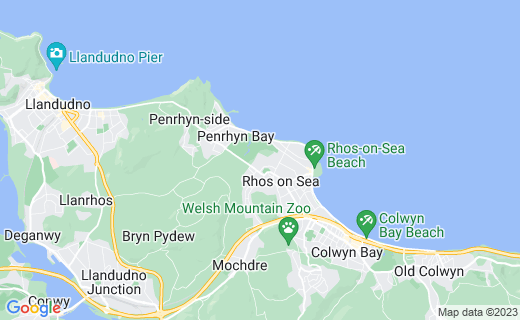 A Welsh Prince Discovering America in 1170

There is a local legend that says Madog who was the son of the Welsh Prince Owain Gwynedd, sailed from Rhos on Sea in 1170. He landed in America well before Christopher Columbus.arrived there.