Chateau Guillaume a French Castle in the Berry Province

Chateau Guillaume the Castle of Eleanor of Aquitaine the Woman Who Ruled France and England.

Chateau Guillaume is a Fortress-Castle nested in a little picturesque village with the same name. Around 320 km South of Paris. It belongs to the town of Lignac in the Berry Province of France.

The Castle was founded by Guillaume X (William X) Count of Poitou and Duc d’Aquitaine. It is here that Eleanor of Aquitaine future Queen of France and later Queen of England is said to be born and spent her first years. This is the reason why sometimes in memory of Eleanor Duchess of Aquitaine (1122-1204) Chateau Guillaume is also called the Castle of Eleanor of Aquitaine one of the most powerful women in Europe during the High Middle Ages. A Duchess who became Queen Consort of France (1137–1152) and of England (1154–1189).

Where is Chateau Guillaume and How to Get There

Chateau Guillaume is nested in a little picturesque village with the same name. Around 320 km South of Paris. It belongs to the town of Lignac. To access the site, you must drive as there is no public transport available.

The nearest train station is in Argenton Sur Creuse, about 35km away from Chateau Guillaume

Where Is Chateau Guillaume 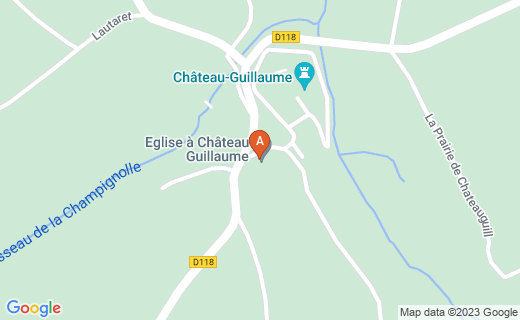 Chateau Guillaume, The Village and the Castle

Château Guillaume offers an imposing majestic view amidst the green scenery of the valley. You will get there through a sinuous country road to be surprised with the sudden view of the imposing walls and architecture of one of the most beautiful castles in the area.

When To Visit Chateau Guillaume

The chateau is open to the public only from June to September. For more information and group visits you can call 0033 254 25 62 81

A good time to visit would be during the local festivities the last Sunday of July. During the Saint Christophe festivities, you can enjoy a small "brocante" (antique outdoor market), a small parade and a fair.

Another good time to visit is during the “Fête de château Guillaume” on the first Sunday of October.

Near Christmas time, there is a Christmas market where you can find local produce.

Chateau Guillaume: The Castle Of Eleanor Of Aquitaine, One Of The Most Powerful Women In Europe During The High Middle Ages.

Walking Around Chateau Guillaume with my Children

There is a lovely wild path of around de 1,7 km that surrounds the castle and allows you to discover part of the playground of Eleanor of Aquitaine the women who became Queen of France and later Queen of England.

The path is marked and easy to follow. There are even picnic tables for those who wish to take a break. During your walk you will need to spot (not always easy) the 4 sign posts each showing you the direction to follow and telling you a bit of history as if it had been written by Eleanor of Aquitaine herself.

Castle of Eleanor of Aquitaine

Perhaps in memory of Eleanor Duchess of Aquitaine (1122-1204) Chateau Guillaume is also called the Castle of Eleanor of Aquitaine who, at her time was one of the most powerful women in Europe during the High Middle Ages and became Queen Consort of France (1137–1152) and of England (1154–1189).

Eleanor The Woman who Ruled England and France

Eleanor of Aquitaine: Queen of France, Queen of England

Eleanor of Aquitaine: Queen of France, Queen of England
This gripping biography is the definitive account of the most important queen of the Middle Ages. The author draws on a wealth of primary sources, including a collection of Eleanor's own documents not previously accessible to scholars, and portrays an extraordinary woman who sought control of her own destiny. A queen of unparalleled appeal, Eleanor of Aquitaine retains her power to fascinate even 800 years after her death.
Buy Now

Eleanor of Aquitaine : The Incredible Life of the Woman Who Became Queen Of France and Queen of England

It is argued that Eleanor of Aquitaine was born in Chateau Guillaume at around 1122. At the death of her brother in 1130, she inherited the duchy of Aquitaine. At the death of her father in 1137, at only 15 years old, she became what today we could call one of the richest, most powerful, and, therefore, one of the most eligible brides in Europe as she controlled more land than the King of France himself.

That same year she married King Louis VI “The Fat” –aged 16- who only a few days after the marriage, after the death of her father, became King Louis VII of France. A few months later, in December 1137 Eleanor was crowned Queen of France.

A woman of action, Eleanor participated in the Second Crusade. She insisted on taking part in the Crusades as the feudal leader of the soldiers from her duchy. At around the same time she was already looking to annul her marriage to King Louis VII but the Pope rejected her request and asked the couple to try to revive their marriage, which they did, and a second daughter was born out of that reconciliation. However, a second daughter was not going to save Eleanor’s marriage. She was supposed to provide a son to the Kingdom. So, after 15 years of marriage Louis VII agreed to an annulment based on consanguinity at 4th and 5th degree.

This is how aged 30 Eleanor found herself free with her lands restored to her, making her aging one of the most eligible brides in Europe. Not wanting to waste any time, as soon as her marriage to the King of France was annulled, she became engaged with Henry, Duke of Normandy. It must be noted that Henry was also her cousin of third degree and that he was nine years younger than her. They married eight weeks after Eleanor’s marriage annulment.

Two years later, in 1154, Henry Duke of Normandy was proclaimed heir to the English throne after waging successful campaigns and gaining support from many English lords. On December 19, 1154, Henry and Eleanor were crowned king and queen of England by the archbishop of Canterbury.

As a Queen of England, Eleanor managed to give birth to 8 children 3 of whom became in time Kings of England. In 1189 when her son Richard I, known as Richard The Lionheart, ascended to the throne and later went to the Third Crusade, once more, Eleanor took the power, this time as Queen Regent. She was then 67 years old, a very old woman for her age but nonetheless a strong Queen.

On May 12, 1994 both Richard the Lionheart and Eleanor left England for Normandy. Neither would ever set foot in England again.

Eleanor lived a long life; in fact she managed to outlive most of her children. She was Queen of England and France and ruled as regent several times with perhaps better success than her male counterparts.

More about Eleanor d’Aquitaine the woman who reigned over France and England.

If you are captivated by this woman, but do not fancy going trough history books you can watch The Lion in the Winter (1968). A film about the tempestuous relationship between Eleanor (Katharine Hepburn) and Henry (Peter O’Toole).

A more modern version dates from 2003, a remake for TV of The Lion in Winter starring Glenn Close and Patrick Stewart.

Chateau Guillaume is a dream for architecture and history lovers. But it is also a good place for a family day out. We visited with our children who loved the enchanted gardens. They ran and looked for fairies and dwarfs, although all they found was a frog. But who knows, maybe it wasn’t really a frog, but an enchanted Prince!

Did You Enjoy This Visit To Chateau Guillaume?

3 out of 5 stars from 2 ratings of Chateau Guillaume