Chiemsee, The Biggest And Beautiful Lake In Bavaria, Germany

I'm a natural born Filipina who lives my adopted country of Germany for more than three decades. I love traveling in Europe.

Chiemsee is the biggest lake in Bavaria. It is located between Munich, Germany and Salzburg, Austria. It is surrounded by amazing landscapes and mountains. It has three islands, Herreninsel (men´s island), Fraueninsel (women´s island) and Krautinsel (herb island).

My friend and I started our trip to Chiemsee from Munich train station. It costed only €29 Bayern ticket from Munich. With this ticket I could bring 4 persons with me, back and fort until Salzburg, Austria but we only used it until Rosenheim because my other best friend Beth was waiting for us with her car. She lives around Chiemsee and was waiting for us in the parking place of Rosenheim train station. Our drive from Munich to Rosenheim was almost an hour.

Beth and I have not seen for 7 years while Beth and Celia have not seen for more than 15 years. So, there are a lot of changes since we had met each other for a long time. We are getting older but wiser and still young at heart as we are still fond of laughing out loud about something that catches our humor. Anyway, Beth played as our tourist guide and showed us some secret places where we were able to see the fantastic view of Chiemsee. Up above the scenic platform of Toerwang, Sammerberg.

From the scenic platform of Toerwang, we were breathing the fresh air while admiring the beauty of the nature. It reminds me of Ireland. Green and green everywhere with the view of the mountains and lake Chiemsee. I know now why there are lots of tourists coming to this place from all over the world. After this, we went to Stock Prien at Chiemsee where we took our boats ride to Herreninsel. Crossing lake Chiemsee (back and fort) costs for adults / person €9.50 including guided tour inside the palace and the "GÖTTERDÄMMERUNG" exhibition. There is a discount for youth. 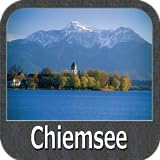 From the port of Herreninsel, we still walked for about 15 minutes through the "forest" until we saw the entrance of the park. There I recognized that King Ludwig II really copied Versailles Palace in France for I have seen it in Paris in 1998. The park has fountains with beautiful statues of women, men and children in many different positions. In another fountain with frogs, men and women looking up the top where a lady and a child was looking up the sky.

Herrenchiemsee Palace is located in the biggest island in Chiemsee, the Herreninsel (men´s island). It is the unfinished Palace of King Ludwig II of Bavaria. It is a copy of the Versailles Palace in Paris. King Ludwig II was a fan of the Sun King Louis the XIV of France that he wanted to pay a tribute to his royal French idol.

Our guided tour inside the palace was good. We had decided to take the German language guided tour so that we could understand it well. We were disappointed though, for we were not allowed to take photos or to use our video cameras due to the palace business organization. So we just admired the replica of the rooms of Versailles Palace for a few minutes before going to another extravagant golden rooms that was created.

The rooms are very extravagant and it is a French rococo style. The furniture's and decorations are exquisite, huge hall, frescos on the ceiling and 2,000 candles on the chandeliers ( as what the tour guide said) hanging in the amazing mirrored room overlooking the garden. The bed of the king impressed me much. So beautiful! What a pity! He slept there for only one night.

As my friends and I were there, there was a rehearsal for a theater play or an opera. I think they were rehearsing "Götterdämmerung" of Wagner being held in this palace.

" GÖTTERDÄMMERUNG"--King Ludwig II and his era.

"GÖTTERDÄMMERUNG" means according to Wikipedia, "Twilight of the Gods" and it is the last of the four operas of Richard Wagner "The Ring of the Nibelungen". 2011 is the 125Th death anniversary of King Ludwig II. He was the Fairy Tale King of Germany. He was found drowned in Starnberger Lake. His death was until now mysterious. The place of exhibition is located in the unfinished rooms of the Palace. In this exhibition, the king as a child, the youth king, his time being a soldier and his dramatic life as a king is being portrayed. Everything about King Ludwig like his first clothes, gloves, etc are exhibited.

The day was gone again and it was time for us to go home. Our head was full of impressions about the life of King Ludwig II and about the Bavarian, German culture. How happy we were to spend the day full of culture and history. We drove with the carriage to the port of Herreninsel. We went back to Stock Prien with our return boat and had a dinner with the view of Chiemsee. Later we went to another lovely scenic view of Chiemsee at Toni´s Cafe, on our way back to Rosenheim train station. As we still had half an hour time for our train, we were strolling around the city of Rosenheim.

Sources: Flyers of Chiemsee, Wikipedia and You tube Video 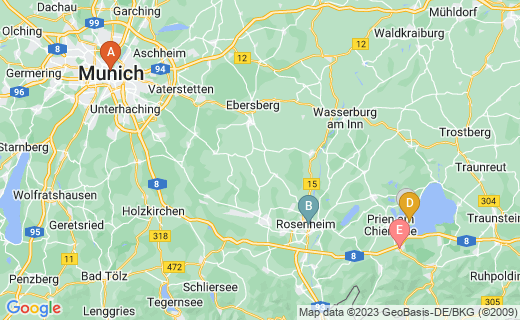