The boat pullers of China : An ancient back-breaking job

You can only find this in China. I have seen photos of boat pullers in China doing their unenviable job along riverbanks, but I didn't know there is a special genre doing the most unbelievable task, naked, along the rocky cliffs and dangerous rapids. Boat pullers (纤夫 chien fu) are those who provide a back-breaking and laborious service by pulling boats through shallow rapids or upstream in China.

The common boat pullers you can see nowadays are along the Shennong Stream, a tributary of the great Yangtze River. Tourists are taken along the Yangtze River cruise by cruise ships, and then transferred to smaller ferry boats to access the Shennong Stream landing site. From there they will take the small and shallow boats to go upstream to view the splendors of nature. And it is there that they will witness an ancient laborious occupation in action...the boat pullers.

The Shennong Stream tour is spectacular and unique. Along the river's shores are signs of ancient Chinese civilization. By the way, it is too common to say that each step you take would have been taken by others thousands of years before. It is that ancient in China. One of the mysteries along the cliffs is the ancient hanging coffins, or suspended coffins. Apparently they were placed there over 2000 years ago! How they were placed there still baffles Chinese historians and archeologists! Ancient local inhabitants buried their dead in hanging coffins in little recesses in the sides of the cliffs. According to Chinese historians, it was the burial custom of the “Pu” People

The coffins were placed at such heights that they were difficult to detect. Now, with the Three Gorges Dam in operation, the water level of the stream is now higher, the hanging coffins or suspended coffins could be seen clearer. Now for the tourist trade, a powerful telescope was constructed on a viewing platform, where tourists can have a better and closer view of the suspended coffins.

Another highlight of the Yangtze River Cruise is to view the ancient plank paths, virtually “hung” on the cliffs by the river. These ancient plank paths were constructed during the Warring States Period (475BC - 221 BC)! They are still as strong even today! One of these goes for 31 miles along the Three Gorges route! 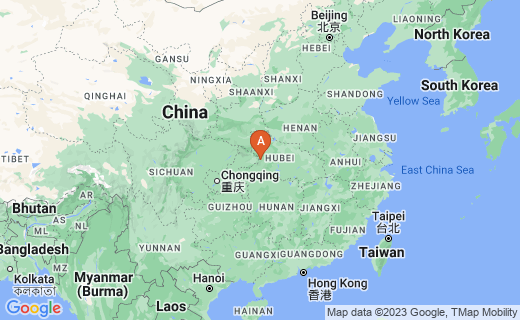 The boat pullers of Shennong Stream

Yes, about the boat pullers, or sometimes referred to as boat trackers.

Shennong Stream is a narrow tributary of the Yangtze River, 60 kilometers long and has a swift current for most of its length. Tourists are taken by luxury cruise ships along the mighty Yangtze River. They are then transferred to smaller environmental-friendly ferry boats to cruise towards the Shennong Stream landing site. From there, the tourists will be further transferred to the small shallow boats called sampan (three planks) or peapod boats because of their shape.

These small boats will each take in a crew of 6 plus 10 passengers. First question on anyone’s mind is why so many crew members? The answer will be very clear when the boats approach the upper reaches of the stream. When the boats reach the shallow spots, these men will jump into the stream and literally pull the boats with ropes tied to their bodies. This back-breaking method of pulling the boats has been the practice for centuries, since ancient times.

These boat pullers used to work naked because the clothing would hinder their movement and also hurt their skin. For the Yangtze River Cruise, it is all very commercial and as such very professionally operated. All the boat pullers wear blue uniform!

This article is actually about a special genre of traditional boat pullers.

When you think that things have changed for the better, there is always a surprise via unexpected email. The email I received showed the authentic traditional naked boat pullers, including a woman. Unbelievable! It is heart-wrenching to view these photos. I don’t know where they came from; but I can safely say that these photos are definitely not from the Shennong Stream! I have to leave out the naked photos as not to violate the terms and conditions of Hubpages and Google Adsense; but believe me, they really carried out their unenviable task naked, including one woman! How people have to endure to earn a decent living!

This is life; some are lucky, some are not.

The photos below speak for themselves.

Now you can watch the video on Youtube about the boat pullers. It is narrated in Cantonese dialect, but never mind the presentation is more visual than narrative. Hope you enjoy it. Please click to go to my personal blog.