Living on the Peninsula: An Overview of the Four Communities of Palos Verdes

The scenery drastically changes when you drive north on Palos Verdes Boulevard toward its namesake. Immediately, the close knit collection of condos and housing tracts along the coast are replaced by green hills, tree-lined streets, Spanish-tiled mansions and a swath of eucalyptus groves.

If one is lucky he/she may hear and see a wild peacock or spot a rare Palos Verdes Blue butterfly. And, possibly, they’ll be able to visit places such as Wayfarer Chapel or the two lighthouses situated on the 100 ft tall sea bluffs.

Once a physical island millions of years ago, Palos Verdes Peninsula is still a world apart from its beach city neighbors to the north and the gritty Los Angeles/ Long Beach Harbor to the south.

The locals know it affectionately as The Hill, PV, or The Peninsula. Those visiting Southern California will immediately recognize it as mass of green land jutting into the blue Pacific Ocean.

The communities of Palos Verdes Estate, Rancho Palos Verdes, Rolling Hills Estate and the city of Rolling Hills are some of the most exclusive neighborhoods in the country, let alone in the Los Angeles metropolitan area. Also, it geographically stands out. With a top elevation of 1447 ft above sea level it looms above the beaches and creates the southern tip of Santa Monica Bay (best known as the South Bay by the locals).

The cities of Palos Verdes Peninsula 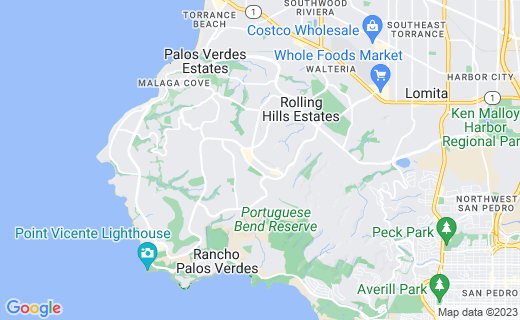 Palos Verdes Estate is possibly the most picturesque of the four cities. Spanish-tiled mansions are situated on steep slopes along tree-lined streets on the northwest side of the peninsula. With its abundance of verdant hillsides and patches of trees of many varieties, Palos Verdes Estate looks like a peaceful villa from another time and place.

The city’s business districts can be divided between Malaga Cove and Lunada Bay. The Malaga area has the main features of the city, and includes access to Torrance's "Rat" Beach.

Lunada Bay is further south. Here, Palos Verdes High School is most important facility. Also, it contains small shops and restaurants. Lunada, however, is best known for other things; it has a great surf spot that some locals love to keep as a secret.

In addition, the city contains numerous horse stables open for riding lessons; private and public golf-courses; hiking and biking trails. And, it has the sea cliffs and vistas with views of the South Bay, the Pacific Ocean and the Channel Island, including Catalina.

Further south is Rancho Palos Verdes - the largest city (over 40,000). As well as population, it's also the largest in terms of acreage. It is also the most rustic, thanks to several local and state conservatory organizations. Much of the area includes Portuguese Bend and Abalone Shoreline Park.

It’s also home to some of the peninsula’s most iconic landmarks. This includes Point Vicente Lighthouse (one of two on the peninsula), Marymount College, Trump International Golf Course, the glass chapel -- Wayfarers Chapel, and Terranea Resort. Trump International and Terranea are fairly new. The resort is located on the former grounds of Marineland, a water-themed park that once rivaled SeaWorld before closing its doors more than 20 years ago.

There are other sights to behold. In the area around Portuguese Bend and Abalone Cove, the land is slowly slipping into the ocean. As a result, the main road in this area, Palos Verdes Drive South, is constantly shifting. The road has a major dip. Many unsuspecting drivers have had unwanted roller-coaster rides on this small, but dangerous stretch of road.

The most important area within Rolling Hills Estate is along Silver Spur between Crenshaw and Hawthorne Boulevard.

While Rancho Palos Verdes is the environmental center, its neighbor, Rolling Hills Estate, is the financial, educational and cultural hub of PV.

The most important area within Rolling Hills Estate is along Silver Spur between Crenshaw and Hawthorne Boulevard. The largest shopping center in PV, Promenade on the Peninsula, can be found. Also, this is the location of the largest library in the Palos Verdes Library District (Peninsula Center Library), as well as home to Peninsula High School (formally, Rolling Hills High School).

In addition to the mall (and an extension of it) is the Norris Center of Performing Arts (there is another Norris theater; across the street; however, it has been converted to serve a church). The theater is a 450-seat, tiered structure that offers major and high school stage plays. The performing arts center also offers productions of stage plays and concerts. In addition to that, it offers educational courses in acting and production.

Territorial Surf: The Dark Side of PV

There is a dark side to Palos Verdes. In some parts, outsiders are not welcome. This is particularly true among the surfers who have declared certain top surfing areas as theirs. Over the years, several people coming from one of the surrounding lowland communities to surf have been harassed or assaulted. Some of the individuals involved in this have given themselves names such as the “Dirty Underwear Crew”.

Either way, these few individuals have created an unwanted blemish on PVs rocky beaches.

Portions of Torrance, Lomita and Redondo Beach share the northern base of the peninsula. A fire road meandering through a stretch of eucalyptus groves separates these large "flatland" cities from the ones on PV. The southern slope portions of the Los Angeles community of San Pedro. Miraleste Drive, Western Avenue, Palos Verdes Peninsular Park, and Deane Dana Friendship Park are the unofficial borders.

San Pedro is the home to many important places and historical landmarks. On its northwestern edge near Rancho Palos Verdes, one can find Point Fermin Light House, Angel Gate Park (former barracks converted into a series of professional art studios), remnants of the World War II-era Fort McArthur’s Coastal Battery, and Korean Bell of Friendship