Cleveland Lakefront State Park is actually a cluster of lakefront parks that stretch along miles of Cleveland’s Lake Erie shoreline, connected by a bike trail and a series of local roads, state routes and expressways. These parks, combined with other facilities of the ‘Emerald Necklace’, provide interconnected recreational and green spaces to all citizens.

The State Park begins on the west side of Cleveland at Edgewater Park, a large and historically well-frequented swimming and sunbathing beach along State Route 2 and Edgewater Drive at the entrance to Lakewood, with such amenities as restrooms, picnic areas, picnic shelter, playground, bathhouse and concessions. At the eastern end of Edgewater, a boat dock and access for fishing are provided, along with an exercise course.

Slightly farther east sits Gordon Park, near the intersection of State Route 2/Interstate 90 and Martin Luther King Boulevard (and its access to Rockefeller Park to the south). Gordon Park is the site of the State Park’s administrative office, and also provides a playground, picnic areas, restrooms, boat dock, boat launch and fishing access. Fishing is particularly good at Gordon Park, as it is situated near the warm water outlets of the nearby Cleveland Electric Illuminating Company generating plant. 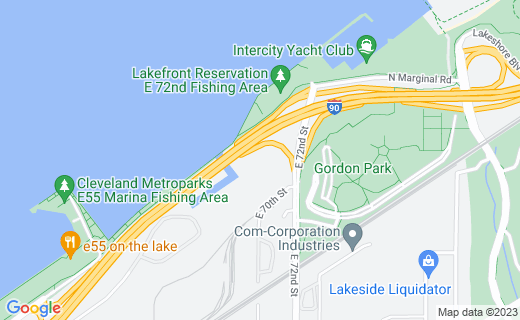