Situated on a constricted urban site of less than 2 acres at the eastern edge of downtown Cleveland's office core, these rather unique paired structures currently house the administrative offices for health and social services of the Cleveland Municipal School District. The facility’s property at 1440 Lakeside Avenue is virtually consumed by structure, abutting the right-of-way and property lines, with no on-site parking and little in the way of landscaping or other site embellishments.

The rearward (southerly) seven-story box of a structure is a fairly conventional office building, with a glass curtain-wall north face, partially fenestrated south face, and precast concrete east and west faces, rising atop first floor concrete columns. The styling of the structure is typical of early-1970s postmodernist design. The north-facing reflective glass curtain-wall façade of the cubic volume of the office block rises behind a multi-story gray stuccoed sphere of 50-foot diameter. That sphere provides an imposing visual form along Lakeside Avenue just east of East 14th Street — especially as it is reflected in the office block’s glass façade. It is connected to the rear office block by an enclosed second-level pedestrian walkway.

This 136,000+ square feet of the paired facilities was constructed in 1973, and initially served as the site of computer-oriented high school. The sphere had housed the school’s planetarium, but has since served merely as an auditorium. Substantial repair and renovation was undertaken by the school district in the mid-2000s, to make the structures suitable for continued occupancy and flexible use.

Staffers within this office facility are responsible for the administration and coordination of all of the social and human services of the Cleveland Municipal School District. (Some of them must be literally running around in circles daily.) 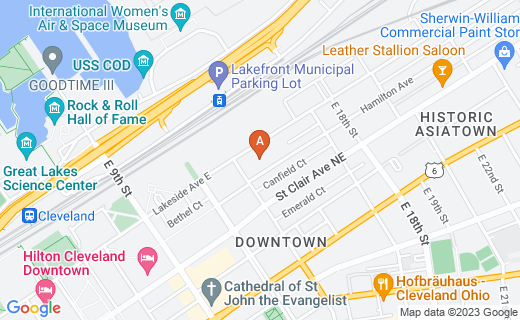 So, does this spherical appendage to a rectilinear box of a building rank right up there with the gherkin-shaped office structure in central London? or the perhaps to the sharp angular shapes of the pyramids of the Louvre and the Rock and Roll Hall of Fame and Museum? or maybe to the silly doo-wop-roofed management school building at Case Western Reserve University not too many miles eastward? Perhaps not. It may just be a cousin to all those spherical cinemas at science centers peppered about our (oblate spheroid) planet.