One might consider the Flats District an embodiment of Cleveland’s conflicted, scrappy and slowly maturing youth — dirty, tough, vibrant, unsophisticated, mercurial, and yet crucial to the city’s long-term vitality.

The Flats District generally includes all the low-lying flat or nearly flat land areas that border or are embraced by the sinuous curves of the Cuyahoga River, from its mouth at Lake Erie, upstream several miles into the heart of the city. It is within the Flats that Moses Cleaveland first debarked with his Western Reserve surveying party in July of 1796, to found the new town that would bear his name.

The primacy of The Flats in Cleveland history is evidenced by its street names of River, Center, Main, Canal and Washington. The Flats provided both the gateway and the spawning grounds for the lake and river commerce that would fuel the growth of the new town. From its river landings would flow ore, coal, steel, dry goods, food, garments, staples, tools and manufactured items, much of it stored in the bulky and blocky structures of The Warehouse District on a bluff above.

Initially, the eastern bank of the river fostered much commercial activity, while the western bank housed many of the region’s early Irish and German immigrants. With Cleveland’s annexation of neighboring Ohio City (situated on the west bank of the Cuyahoga) in 1854, and the successive construction of a number of river bridges, Flats areas on both banks became more closely linked, and somewhat more homogenous.

Throughout the latter half of the 20th Century, many of those industrial activities suffered mightily — from foreign competition, recession, business migration to the Sunbelt, and industry maturation. However, beginning in the 1980s, the Flats was able to recast itself as a district of fun, food, drink and entertainment. The Powerhouse at Nautica was redeveloped into a hot mix of restaurants, music, comedy and leisure. Older structures were renovated and repurposed as offices, condos, apartments, clubs and trendy eateries. Marinas, water taxis, rowing crews and pleasure craft populated the river.

But 2000 saw an abrupt and dismal collapse of activity in the Flats, triggered by drowning deaths, bar fights, and police, fire and health crackdowns. Citizens stayed away and businesses failed. The latest incarnation of the ever-unfolding future of the Flats was made public in 2005, with the announcement of plans for a sizable mixed-use redevelopment of much of the east bank of the Cuyahoga into an office/condo/hotel/retail complex. That plan has been stalled by the recent recession, but may start anew within the next several years. 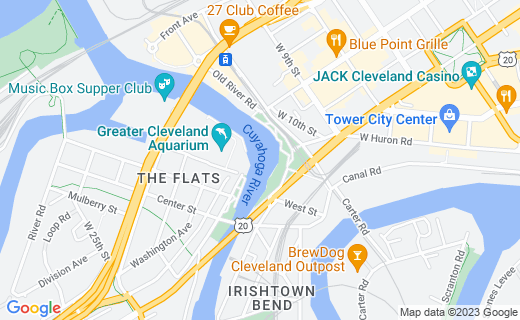 Cleveland's Flats line both the east and west banks of the winding Cuyahoga River, below the bluffs of the city.