With a population of over 100,000 people in the Bismarck-Mandan metropolitan area, Bismarck, North Dakota is home to four opportunities for higher education. These include:

Bismarck State College (BSC) was founded in 1939, being the first two-year college in the state of North Dakota. BSC is the fourth largest in North Dakota's University system with 4000 undergraduates.

Besides being an energy-friendly school it is military friendly as well. BSC offers educational programs for those serving in the U.S. Military, their spouses and dependents. G.I. Jobs has placed BSC in the top 15 percentile for military friendly schools and also made the 2009 Military-Friendly Colleges and Universities list by Military Advanced Education.

For athletics, BSC is home to the Mystics and play in the NCJAA region 13 division.

The University of Mary is a private school that was founded in 1955 by the Benedictine Sisters of Annunciation Priory. The University claims they are unique in that they nurture the mind, body and spirit. They are proud to have a 95 percent job placement rate for their graduates. They have about 2,800 students.

Recently, U-Mary announced its Director of Campus for their new campus in Rome, Italy. The new Director, Kathleen Crane, says, " it is my hope that this unique liberal arts experience will allow U-Mary students to enter deeply into an investigation not only of Italian history and culture, but also of the ongoing relevance of the Catholic Church to the modern world.

For athletics, U-Mary is home to the Marauders and plays in the NCAA Division II.

The United Tribes Technical College (UTTC) was founded in 1969 by the United Tribes of North Dakota Development Corporation. UTTC's objective is to provide a community in which Indian people can acquire an education and obtain employment.

For athletics, UTTC is home to the Thunderbirds who play in the National Junior College Athletic Association (NCJAA).

In 2012, Medcenter One was bought out by Sanford Health and the College of Nursing became a program through North Dakota State University (NDSU). They still offer an upper-division program leading to a Bachelor of Science in Nursing degree (BSN). 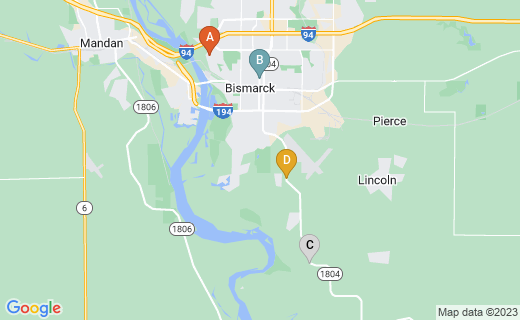