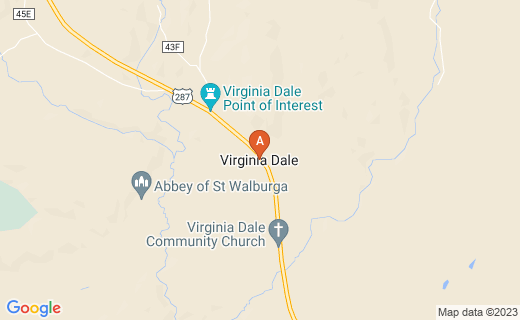 The Overland Stage Trail is also known to many as the Overland Trail stretched from Atchison, Kansas and following emigrant trails along the North Platte River in Kansas and Nebraska. A stage stop was established at what now is present day Julesburg, Colorado. At Julesburg the trail divides and splits with one trail following along the South Platte River through present day towns of Sterling, Fort Morgan to the last stop on the South Platte to Latham Located near present day Greeley, Colorado.

In Wyoming, the trail goes through the Laramie River Valley and skirts the northern side of Elk Mountain. Fort Halleck was established here in 1862 to protect travelers on the trail. Following the same path as the later transcontinental railroad and modern Interstate 80.

Many of our present day highways follow and shadow the old Overland Trail. Interstate 76 follows along the South Platte River to Fort Morgan, Colorado. North of Fort Collins, Colorado modern US 287 follows the path of the Overland trail north to Laramie, Wyoming.

It is along present day US 287 and 4 miles south of the Wyoming border that you will find the well preserved buildings of the Virginia Dale stage stop. To visit Virginia Dale Stage Stop please keep in mind that it sits on private land but is open to the public to visit this ghost from the past.

Death of a Gunfighter: The Quest for Jack Slade, the West's Most Elusive Legend
Buy Now

Jack Slade (January 22, 1831 – March 9, 1864), was a stagecoach and Pony Express superintendent. Jack was one of the men that was a major part of the American West and the and also earned a reputation as a gunslinger of note. Jack Slade was a solid, fearless and tough even by the American West standards. A very capable man with a streak of mean in him, especially when he drank. A man so mean that once he beat his Mom for over cooking his steak. The whole time he was beating her he kept repeating "I said rare Ma, and by God I meant rare".

Jack joined and served in the US Army and fought in the Mexican War around the years 1847 to 1848. Later on he would marry Maria Virginia (maiden name unknown) in or around 1857. Some believe that the stage stop Virginia Dale in Colorado was named after his wife.

During the early 1850's the very able Jack Slade became a teamster and wagon master for the Overland Trail. In 1859, as the United States was heading down the spiral path toward Civil War. The US government only link to the now very rich state of California was the Overland Trail. The stage line had its problems and was plagued by corruption, outlaws and Indians still on the warpath. It was at this point in time that the Overland Trail company turned to their own employee and a man who was a Mexican War veteran with a tough reputation to clean up its most dangerous but profitable division. From 1859 till around 1862 Jack Slade became known as "The Law West of Kearny." Jack exceeded his employers hopes beyond anything they could have dreamed about. He ran his section of the Overland Trail line with an iron fist and some say with hot lead. He kept the stagecoaches and the US mail running and on time. He also helped in launching the now famous Pony Express.

Jack Slade was successful in capturing bandits who tried to rob the stages and was instrumental in driving away gangs and horse thieves and even in one case shot and killed a employee Andrew Ferrin for failing to harness a stage coach team quick enough.

How Jack Slade became a legend

In March 1860 Slade had been dispatched by his company to fire and relieve Jules Beni, the corrupt station manager of the Julesburg, Colorado. In hearing of this Jules Beni ambushed and shot Slade 13 times and left him for dead. Slade did not die, a very tough man indeed.

A short time later, after their first encounter Jules was captured and actually hung. Western justice being what it was in those times he was only hung for a few seconds. He was let down and was released on his promise that he would leave the country and never returned. Of course, being the scoundrel that he was Jules did not keep his promise.

After his full recover Jack Slade swore that he would find and even the score with one Jules Beni. It was during this time span that Jack becomes in charge of the Virginia Dale stage stop in Northern Colorado. Jack sent 4 of his men to locate and bring Jules to him, which they did.

Jack Slade gets his revenge

Jules Beni was transported to Virginia Dale stage stop and was chained to a pole in the corral while someone fetched Jack Slade. Jack Slade now had his arch enemy at his mercy and pulled his pistol and shot Jules in the mouth. Jules did not die outright and Jack proceeded to take potshots at Jules as he lay in his own blood and the dust of the corral at Virginia Dale. At one point Jack pulled his knife and cut the ears of Jules and told him he would always think of this moment and of Jules when he looked at his watch for Jack was going to pin one of Jules ears to his watch chain. Jack did what Jules failed to do was Jack shot Jules in the head at point blank as a coup de grâce. Slade also kept the other ear and would throw it on the bar when he was drunk as he would tell the tale of the demise of one Jules Beni.

When the now famous Buffalo Bill was 14 years old he was a Pony Express rider and worked for Jack Slade for 2 years. Years later when Bill was famous in his own right and traveling with his "Buffalo Bill and the Wild West Show" he was quoted about Slade as saying “Slade, although rough at times and always a dangerous character — having killed many a man — was always kind to me". “During the two years that I worked for him as a pony-express-rider and stage-driver, he never spoke an angry word to me.”

While Jack was the stage stop manager Virginia Dale, Colorado he ruled his area of the Overland Trail as a hard and dangerous man. All the outlaw's and bandits stayed a wide path of Jack Slade. Or did they? It became rumored that Jack was not the hard nosed manager, he portrayed himself to be but actually a leader of a gang of outlaws and he used his position as stage manager to gather information about gold shipments and passed that along with members of his gang who would in turn stage holdups far and away from Virginia Dale location to keep their boss Jack Slade reputation intact with his bosses and company at the Overland Stage company.

In 1862 after a stagecoach robbery of 60,000 dollars in gold that was meant for US army payroll that was traced, but not proven to one Jack Slade at the Virginia Dale . Along with his fondness of shooting canned goods off a grocery shelves in nearby towns while drunk the company had no other recourse but to discharge Jack from his duties as manager of the Virginia Dale stage stop.

After being let go from his job at the Overland Trail company Jack and his wife moved to another rough and almost without law town of Virginia City, Montana. Jack always a mean and bad hard case when he drank only got worse after his move to Montana.

"He would strike a man in the face while drinking with him, would rob his friends while playing cards, would ride into the saloons and break up the furniture, and destroy property with seeming exultation at his own maliciousness," wrote Western author and journalist Emerson Hough in "Story of an Outlaw." "He was often arrested, warned, and fined; and sometimes he defied such officers as went after him and refused to be arrested. His whole conduct made him a menace to the peace of this little community."

Jack Slade was becoming a dangerous and drunken maniac. As a community improvement project a committee of vigilantes set out to capture and rid their community of one Jack Slade. The vigilantes found Jack drunk at a local saloon and captured him without a fight. With a simple wave of a hand, they took him to the nearest corral gate beam and hung till he was dead the once feared and respected bad man and gunman Jack Slade.

On March 9th, 1864 in Virginia City, Montana, Jack Slade official crime was "Disturbing the Peace".... His punishment was he was hanged, so was the way of western justice in those days.

Virginia Dale, Jacks wife was brought to town and presented Jacks now lifeless body. Virginia took his body home, pickled it in alcohol in a metal casket, and kept it under her bed for several months. She then took it to Salt Lake City, Utah and buried him in the old Mormon Cemetery where his body remains today.