A National and State Leader

Columbus is the capital of Ohio and its largest city. Named for explorer Christopher Columbus, the city was founded in 1812 at the fork of the Scioto and Olentangy Rivers, becoming state capital in 1816.

Columbus economy is built on food and hospitality (allowing it to become a national test market and a hub for mystery shopping), education, insurance, healthcare, and technologies. Aerospace endeavors began to expand and thrive in the 1990s as well and Columbus is on the northwest point of the Ohio Space Corridor that extends from Cincinnati through the Dayton area and long I-70 East.

In the last two decades, Columbus has become a cosmopolitan city, with a high influx of immigrants from the former Soviet Union, Asia, and most recently, Somalia and other African countries.

Columbus is one of America's largest cities and a national Top City for Technologies for the 2010s. In fact, our local Flippo the Clown brought Cable TV to the city in the 1970s ni the form of QUBE.

The Greater Columbus Area includes Franklin County and parts of Delaware and Fairfield counties for a total of well over 1 million people. The larger metro area includes 7 counties. 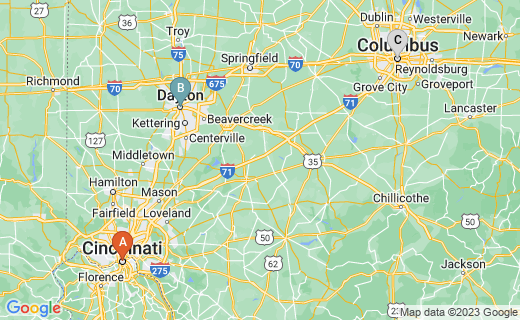 Ancient mound-building societies lived in and around what is now Columbus circa 10,000 - 12,000 BC near the Scioto and Olentangy Rivers. Interestingly, there is a park on the Scioto River near the fork with the Olentangy and that park is home to a replica of the Santa Maria. This ship is a part of the city recreation and parks program and visited by many people. There has been much controversy over the Santa Maria and the explorer's treatment of Indigenous peoples, with several protests against the ship when it was first set in place and against a large statue of Columbus at a nearby community college. We have our Native American Indian Center on the near south side of the city that serves not only Native but all people. Mound Street, just west of downtown was named for its location next to a large Native American burial mound nearby. Many other Native earthworks were located in Columbus, the most notable being one still located on a city bus line on McKinley Avenue on the near west side of the city.

Native Americans indigenous to Ohio and those that migrated in from the American Northeast are the Miami, Delaware, Wyandot, Shawnee, Mingo, Algonquian, and some members of the Iroquois nations. There were harsh battles over the land. with treaties finally made between the white man and the Indian.

In the late 1700's, a surveyor named Lucas Sullivant founded a village on the west bank of the Scioto River and Sullivant Avenue, named after him, runs westward form downtown. In honor of Benjamin Franklin, Sullivant named his village Franklinton. This area has always been subject to flooding and remains so today. It is also the target for revitalization projects in the inner city.

My paternal great-grandfather was a contractor on the National Road west of Columbus in Madison County after the Civil War and my grandfather worked on the eastern portion of it later, near Cambridge and Zanesville. The National Road reached Columbus from the East in 1831, enabling more European immigrants to come into two settlements east of the city. The Irish settled in the north along Naughten Street and Germans settled in the south, creating German Village, where the small bungalows now cost over $1 million each. These German settlers instituted Trinity Lutheran Seminary, Capital University, and the first Kindergarten in the United States.

In the Civil War, Columbus had Camp Chase, a Union Army base for 26,000 troops and up to 9,000 Confederate POWs. Prisoners were unloaded at what is now the State Capital Bulind gat Broad and High Streets and were marched westward a few miles to the camp. Over 2,000 Confederate soldiers are buried there today.

The Ohio State University was founded when Morrill Land-Grant Colleges Act funded the Ohio Agricultural and Mechanical College in 1870 on the former estate of William and Hannah Neil.

There was a military armory on site as well, and a reconstruction of it stands near the Wexner Center for the Arts at 15th Ave, and High Street, just across from Sullivant Hall, which used to the Ohio Historical Society. It is now one of the major University libraries and houses a performance theater.

Ohio Stadium is to the northwest corner of the campus and home to Buckeyes Football. The American Professional Football Association was founded in Canton in 1920, but moved to Columbus 1921-1941. In 1922, it name was changed to the National Football League (NFL).

World War II started many new jobs in Columbus, including those with Jeffrey Manufacturing Company, which produced mining machinery and served the war efforts. Appalachians then moved north and west into Columbus or work to account for 1/3 of the population.

In 1948, the Town and Country Shopping Center opened and was the first or one of the first such centers in America. City Center Mall downtown has had economics problems and lost many merchants, but is set to open a Sam's Club on site. Northland Mall in North Columbus has been razed for a charter school and low-cost apartments. Westland Mall is about hall empty. However, Tuttle Mall on the northwest side and Polaris north of the city are booming and look like cities unto themselves. So does Easton Town Center in north Columbus.

In the 1970s landmarks were torn down, including Union Station and the Neil House Hotel.

Today we have new businesses and the Center of Science and Industry downtown, but not much goes on after 5:00 pm. However, a system of upscale parks and eateries along North High Street and the Scioto River in the downtown area are bringing people in the evenings to enjoy concerts and festivals. Food trucks are increasing in numbers and a Food Truck Festival is held at least quarterly in the downtown district.

New condominiums on the river are changing activities even more. People are moving back Downtown from the suburbs. The Arena District just north of Broad Street sees quite a bit of activity with Nationwide Arena and other venues for sporting and musical events. Evangelistic crusades, boxing weekends,and other events have been held there, as well as the Arnold Fitness Weekend for many years. 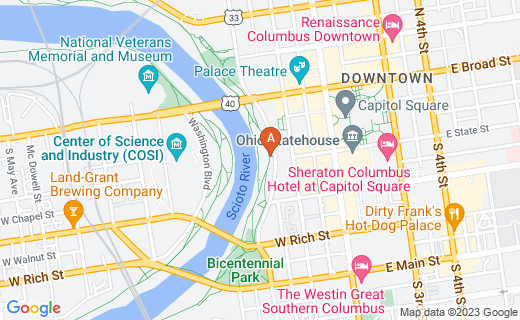 A large number of people are employed in education at The Ohio State University, Franklin University, Columbus State Community College, and branch campuses of other schools. There are also number technology schools for certification in tech occupations. Nationwide Insurance HQ is downtown, near Motorists, Grange, Safe Auto, State Auto and independent companies. Motorists Insurance erects life sized nativity scene for Christmas each year, and has a living presentation during the week of Christmas. Seasonal music plays nightly for passing motorists. Banking is also big. Chemical Abstracts Service and The Battelle Memorial Institute are responsible for scientific research and military development.

Limited Brands (The Limited, Inc.) originated with Les Wexner in Columbus and expanded to The Limited, Express, Limited Too, Structure, Victoria's Secret, and Bath & Body Works. These are being sold off at this time. Two famous fast food chains are based here: Wendy's and White Castle.

Port Columbus International Airport once housed North American Aviation (North American/Rockwell) and experimental aircraft were tested there in the 1060s-1980s). Some people reported UFO sightings near the factory site.

Budweiser brewery is located on the north side. I know the family that owned the farms and other land all around the brewery and they became very rich when Budweiser bought it. There used to be a herd of bison and gazelles on the property, but not currently.

Nationwide Insurance is one of the largest insurance companies in the country. It came out of the old Ohio Farm Bureau locally.

Flippo The King of the Clowns

Jungle Jack Hanna, based in Tampa Bay Busch Gardens, is Director Emeritus of The Columbus Zoo and Aquarium. When he first came to the zoo, it consisted of a lot of undeveloped land, muddy, smelly exhibit venues, and really just a few animals. In the 1950s, there were 2 elephants, an outdoor cage of friendly raccoons, a lion or two, some interesting apes, and a pretty good reptile house and bird house. Many exhibits were empty. The spotlight shined, however, when Colo the gorilla was born there in 1956. As of the end of 2013, she was still living and appeared to be smiling at the cameras for her 57th birthday.

Later, Jack came and taxes and fund raising bright new life to the zoo. It is now recognized for lowland gorillas, manatees, Siberian tigers, and a lot more. Jack appears often on The Late Show with David Letterman and hosts Animal Adventures with Julie Scardina and animal experts form around the world. Director Jerry Borden does a fine job of operating the zoo and leading it in research and breeding activities of the best in the world. Jack and Jerry saved the zoo and it is world class!

Performing arts have come a long way here, with the landmark Palace Theater and Ohio Theaters still operating. There are many theater companies in town, one of which gives free Shakespearean plays in German Village's Schiller Park each summer. There are also ballet, a symphony, and many vocal groups. The King Arts Complex is a fantastic performance venue and African American art and history museum combined.

Sports have taken on a life of there own in this city. Besides OSU teams of every kind, there are pro teams in soccer, arena football, hockey, and minor league baseball (Clippers, the farm team for the Washington Nationals). Auto racing is also big, especially with the Bobby Rahal/David Letterman team to the west of the city. The Arnold Classic, Arnold Fitness Weekend, and Arnold Martial arts festival come to town every March. The All American Quarter Horse Congress happens every October.

Besides the State Fair, we have many festivals. A favorite of mine is the Doo Dah Parade, a satire of ordinary parades. It is huge and growing every year. Marcon, one of the oldest and largest Science Fiction conventions in the country, is held over the Memorial Day weekend downtown in the Convention Center. Dr. Demento often hosts the con.

WBNS TV Channel 10 was home to Flippo the Clown for many years. He was instrumental in bringing Cable TV to Columbus with his introduction of QUBE to us. His clown costume is displayed in an exhibit dedicated to him at the Ohio Historical Society on the Ohio State Fairgrounds. I met him several times. Flippo used to come to my elementary school every year to perform and he was great. The kids and adults loved him. I was 16 and a contestant with my high school on the very first In The Know game show telecast when he was host. Next, as a restaurant manager, I had the pleasure of serving him. I attended his funeral several months ago and beside his closed coffin was a large portrait of him in the trademark clown attire and makeup. One of the mourners wore a clown costume in his honor.

We have many good things in this city, but some bad as well, just like all big cities. We have over 150 active street gangs, but the Mayor is working on that with a special task force and residential involvement. We have one of the largest police forces in the nation, Mayor Michael Coleman has also been instrumental in gaining title to and razing abandoned buildings, making the atmosphere much fresher and more uplifting with each one he tackles and replaces with a new business complex and residences.