Coming to America Looking for That Golden Lining

Paterson, New Jersey has a rich history of industrial achievements for the United States of America. Not only for manufacturing firearms, railroad locomotives but in the 1800’s the most prosperous of silk mills.

As your tour begins, one will be amazed by woodwork and tile work. The art will make one question if an artist lived in this stone mansion. Who was the patriarch of this art filled castle in Paterson, New Jersey? Why is there a castle in Paterson of all places?

Catholina Lambert was born in England in 1834. Joining his parents as a silk laborer at the age of ten years old, he began his journey that brought him to a life of wealth and success and by contrast saddness. After working for years along side his family, he packed his bags and moved to America with his younger brother looking for that golden lining that he heard America promised.


Contrast of success with loss

One of his first jobs was a bookkeeper in a silk company in Boston, Massachusetts. Only after a few years, he became partner of the company leaving his brother to manage at this location. He relocated himself to Paterson’s Dexter Lambert Silk Company. As his mills became increasingly successful, he and his wife Isabella built their home in Paterson, New Jersey. The design of their home was inspired by the castles he remembered in England, the kind that was only a dream for a laborer. The sandstone came from the nearby Garret Mountain in which the castle is surrounded. The Lambert family named their home Bella Vista, which means beautiful view. Appropriately named since their view was looking across the Hudson River to the New York City skyline. A view that never tires.

As the mill industry prospered and spread west of Pennsylvania, Catholina’s life reflected contrast. At a time in his life, age twenty three he married into a high society family’s daughter Isabella Shattuck. Together they had homes in New York City and Paterson. Between the years of 1869-1883, Catholina lost his brother to an unknown disease and six of their sons to scarlet fever. His daughter Florence married with two children of her own, however died in her early twenties. 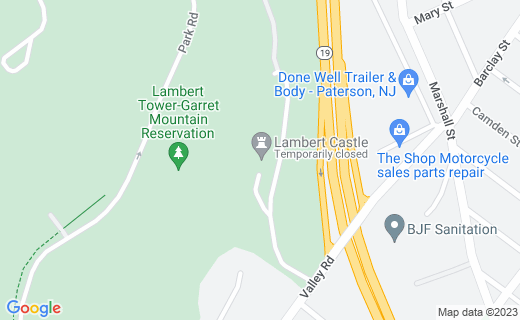 Which continent did your families immigrate from to make the better life in America?

Bella Vista included his home office where he could work from home and overlook t his fiefdom of silk. In 1900, he and Isabella started opening their home to share the art they had been collecting for years. Art and sculptures line the rooms of Bella Vista. Shortly after, Isabella died leaving another great loss in Catholina’s life. In a downward spiral, World War I made a tremendous impact to the silk industry. Finances became a concern like many business. In 1923, Lambert died at the age of eighty nine leaving everything to his oldest son who later sold the castle to the city of Paterson.

Today visitors from around the world can tour Lambert Castle as a museum and art gallery. The home is full of European and American paintings, the interior is mixture of art periods form ranging from the beautiful mantle pieces to the design of furniture, decorative pieces and architecture. One of the most impressive stained glass windows is of the Lambert’s daughter Florence on the staircase. A serene water fountain outside makes a picture perfect location for wedding photographs as many weddings can rent the location’s setting. Two concrete lions greet visitors at one of the doorways.

The museum and manicured grounds are open daily. There is a short walk from the parking lot to the castle. A small fee is requested to enter and your tour includes very knowledgeable docents.

To read more about Lambert's empire and Paterson, New Jersey:

Have your visited Lambert Castle? What was your favorite memory? Piece of art?