Mary and her husband work on international projects and have travelled to many places in Spain.

Cordoba: Lessons in the Passage of History

Tribal foundations with Roman walls. Moorish expansion with castellations and finally stuck on top of over 500 years of Spanish decoration and primping.

Like grandma, nothing in Cordoba was ever thrown out or wasted. If we could stitch ties into skirts, why not mosque to the cathedral. Beautiful lessons in the passage of history and the resilience of great ideas.

Cordoba holds the key to many Western cultural, intellectual, and spiritual development layers. You can see this in a painting in the Calahorra Tower of a group of Christians from the East (Byzantine) visiting the Muslims of the West (Cordoba). Cordoba broke its ties with the Eastern Caliphate in Damascus and established itself as the first Western Caliphate. Nothing could compare with Cordoba as the centre of culture at that time.

Here in Cordoba, Columbus negotiated his voyage with the Catholic Majesties, Ferdinand and Isabella. This encounter took place in the Alcazar de Los Reyes Cristianos garden, where there is a life-size statue of Columbus and the two rulers. 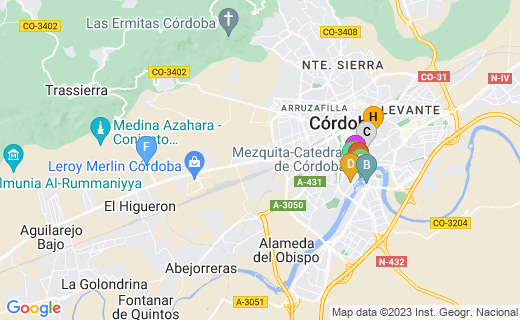 The Mezquita in Cordoba

Best Places to Visit in Cordoba

Which of these is for you the top place to visit in Cordoba?

It is a space vast enough to hold Islam, Christianity, and Judaism comfortably in its stadium-level greatness.

This Mezquita was indeed a place where Moors, Christians and Jews could worship when Abdurrahman I in 785 A.D.built it. Later, however, when the Caliphate needed an enormous mosque, it made the place exclusive for the Moors.

In their red and white stripes, the endless horseshoe arches that have originated from Visigoth art make it different from any Cathedral you've ever seen.

Roman foundations occasionally intrude as Córdoba was a Roman colony and the capital of the Roman Province, Betica. Then, the Visigoths came and took the city from the Romans in the 3rd century and over the remains of St. Vincent Basilica, this Mosque now stands. Look for the glassed-in diggings of the St Vincent Basilica when you're in the Cathedral. The remains of the Mosaic representing this Greco-Roman heritage are well preserved and displayed.

The Inside of the Mezquita in Cordoba

The mix of Moorish, Roman, and Visigoth influences and, of course, the wealth and majesty of the Christian church makes for a stunning display. The different altars of various Saints are in themselves significant works of art. The Cathedral is still in use, and there was a service going on when we were there.

The Choir is the grandest I have ever seen, and the arches and columns inside are spectacular. In all our travels, we have never seen anything like this. You can stay there for the day and not finish admiring all the carefully displayed history.

The stained glass windows are magnificent, representing the best of Spain or the Church. The Cathedral is enormous horizontally, whereas St. Peter's in Rome is massive vertically and horizontally. This building surpasses St. Peter's for its historical significance regarding the various religions on display here.

2. The Castle of the Christian Monarchs

This Fortress and Palace were made more magnificent by its gardens with water fountains, flowers, mature trees, and sculptures. It has four corner towers. The tower of the Lions, the Main, the Doves and the Inquisition stands magnificent when viewed from the gardens.

The centrepiece of the Castle of the Christian Monarchs is the statue of Ferdinand and Isabela, with Christopher Columbus negotiating his share of the take if he hit China. The gardens are stunning, built around the glorification of running water that only a desert nation could understand. The legacy of the Arab world is everywhere and is integrated into what we see, at least, as the soul of Spain.

A must-see of the displays is the 3rd-century Roman sarcophagus with its front sculptured with the journey to the underworld. Some Roman mosaics with designs of Medusa, the Angels and geometric designs are also on display in the small Baroque chapel and are excellent representations of the early Greco-Roman heritage of the city.

Built in 1315 in the Jewish Quarter of Córdoba, the place underwent several reincarnations after the expulsion of the Jews in 1492. You can see here a good example of the Mudejar style of architecture. The centrepiece is the statue of the famous Jewish philosopher Maimonides. As well on display are well-curated Sephardic remnants.

Visiting this 12th-century house, a typical Hispano-Islamic abode, one sees how families lived in the 14th century: rooms for men, rooms for women, kitchen with all the tools used and the Arabic coins used then.

Dated from the 1st century, this temple dedicated to the cult of the Emperor has six columns rising from a high podium. We just happened to see it on one of our walks and immediately recognized it.

When you enter Córdoba, you'll immediately see the crowd on the bridge. People are drawn to the structure as a living remnant of the age before Christ. Although much has been conserved and reinforced, you can almost see Caesar and his Legions. The old water wheel and the aqueduct underneath still represent Roman supremacy in technology.

Córdoba, starting in the 10th century, became the most important city in the Western Muslim world at its height and had so many monuments. However, the one that summarized my experience of Córdoba and my impression of its role in history is the Torre de la Calahorra.

As one enters the first room in the tower, the four enlightened leaders of Córdoba, Maimonides, Averroes, Ibn Arabi and Alphonse X, the Wise welcome you to the most advanced ideas at that time.

That was when the three Abrahamic religions lived in harmony in the city. May that time live again.

From the Castle of the Christian Monarchs, it is an easy walk to the Caliphate baths. You'll find illustrated the various steps of the process of bathing at the time with all its efforts really as a socializing activity and the splendour of life in the Andalusia kingdom. These are the most oversized Moorish baths in Europe.

Take this poll on Cordoba

Have you been to Cordoba?

There are two dishes that we enjoyed in Cordoba:

Parking is difficult to find so get a hotel where there is parking. This will make your travel stress free.

Best City in our Visit of Southern Spain and Portugal

We spent six weeks in Southern Spain and Portugal. Cordoba, by far, was our best experience. Seville was second, and Sintra came third. Try to visit them all.

As a footnote, visit tiny, perfect Obidos, or you'll live forever in regret.

Schedule your visit to this Spanish city in May when the Courtyard Festival is on. Locals decorate their courtyards in the hope of winning the competition, which dates back to 1921. UNESCO has even recognized it with a cultural heritage status.

Courtyards in Cordoba started when the Romans built their homes around a square to have a place to take refuge from the heat. The Moors raised this to even more prominence by adding fountains, climbing roses, beautifully crafted furniture and other sculptural elements to the courtyards that today have become the centers where people receive their guests and have regular social exchanges.

This 12-day festival in May gives you sufficient time to experience it. Below is a peek at some of Cordoba's courtyards.

What is your favourite Spanish city?