Cornwall has it's own language, Cornish. Morgawr is a Cornish word meaning, quite simply, "sea giant". Morgawr is certainly a large creature, a sea giant!

The monster's name is Morgawr and he's been seen and photographed a number of times. Is Morgawr real? Many sightings have occurred:

1876: The first story that there was a monster in the sea off Falmouth, came in 1876, when a fisherman said he had captured one. Of course, back then, it will have been just a local story and that was the end of it, now it'd be across the major newspapers as "Cornish Sea Monster Found"

1900: A report of a sea monster in Penzance, seen by a captain. "...a very large animai of a dark colour, which seemed racing with us. I once saw the animal was not a whale, but some sea monster, the like of which I had never seen in my life. The animal was uncomfortably near. We could even see that the skin was covered some substance like a rough coating of hair. The monster raised its body the fore part clean out of the water, and made direct for the boat. I plainly saw the monster rise until its head was over mast"

1926: A fisherman reported catching something in his nets. This was described as 20' long, with an 8' tail, scaly legs and a beak-like head.

1975: The next sightings weren't until 1975 when two witnesses claim they saw a humped animal off Pendennis Point, Falmouth. Shortly after, in February 1976, a lady called Mary reported seeing a sea monster and sent photographs to the local paper, The Falmouth Packet. At the time she described it as like an elephant waving its trunk, but the trunk had a head at the end. However, neither Mary, nor the negatives of the sea monster have ever been found.

1975: Later in the year, in July, two local fishermen, John Cock and George Vinnicombe, also reported seeing a monster whose head reared up 4' above the water.

1976: The most documented sighting was in 1976, on 17 November. Tony 'Doc' Shiels and the then Editor of the Cornish Life Magazine, David Clarke, saw Morgawr in the Fal Estuary. They managed to get a photograph and this appeared in the Fortean Times in the summer of 1977 edition (edition 22). It was a poor photo because in the excitement of the moment, they managed to jam the camera.

Obviously, since then, there have been many debates about the authenticity of the photograph and it was reported in the book Strange and Unexplained Physical Phenomenon, published in 1993. This book is now exceedingly rare so if you manage to get a copy of it you're privileged.

1977: Other photos exist, taken by Gerry Bennett of Seworgan, Cornwall. Gerry was at Mawnan Smith beach on 31 January 1977 - these are also to be found in Edition 22 of the Fortean Times.

1985: The next sighting wasn't until 1985, in Gerrans Bay, Susan Waldron, a holidaymaker from King's Stanley in Gloucestershire, said she had seen it when she was watching her husband, Christopher Waldron, swimming in the sea, although all she saw was a shadow and shape.

1987: Two years later, in 1987, and some 50 miles east along the coast at Devils Point in Plymouth, Devon, an experienced diver sighted what he described as a dog-like head that rose 3' out of the sea, although the area is an area favoured by conger eels.

1999: The most recent reported sighting was as recent as 1999, again at Gerrans Bay, Cornwall. A man by the name of John Holmes, a former Natural History Museum worker, claims he video-taped an unidentified sea creature. This video footage was released.

What do you think? There are arguments for the sea monster Morgawr to be real, or there's the modern thinking that it's just a myth. Like the Loch Ness Monster, it can never be disproven, only proven. If a fisherman lands a giant sea monster in Cornwall, then it'll prove Morgawr is real. But if nobody finds one, then that doesn't mean it doesn't exist.

If you are visiting Gyllyngdune Gardens in Falmouth, look out for the great wooden carving of Morgawr. This sea monster sculpture's a fairly recent addition. 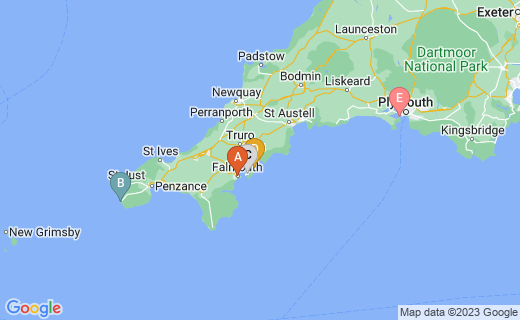 New for the 2010 season, Crealy Adventure Park launched a new roller coaster, called Morgawr - the front of the ride is a huge dragon head/torso.

So, it looks like Morgawr's fame will spread! ... perhaps leading to more sightings of him.

You can write articles like this and earn money, so why not join us. It's completely free, easy and there's lots of help. Click here to Join HubPages Now and join in the fun. No fees, no costs, no charges, ever.

Cryptozoology A To Z: The Encyclopedia of Loch Monsters, Sasquatch, Chupacabras, and Other Authentic Mysteries of Nature
Buy Now