Countries of the Equator

If you were asked to name all of the countries that the equator goes through, could you do it?

You’d probably think of some of them but would you get them all?

Ecuador may be the one that instantly comes to mind – because of the name.

Let’s start there and work our way around the globe in an easterly direction.

I once visited Ecuador and while there bought two teddy bears for my two daughters – which they then promptly named Ecua and Dora!

The equator runs through the southern part of Colombia (having just missed the northern tip of Peru!).  Colombia is the fourth largest country in South America and one of the continent's most populous nations (45.7 million in 2009). It has large oil reserves and is a major producer of gold, silver, emeralds, platinum and coal.

Unfortunately it has been ravaged for decades by violent conflict involving outlawed armed groups and drug cartels.

Next, the equator runs through the northern part of Brazil, South America’s largest and most influential country. Brazil is one of the world’s largest democracies with a population of 193.7 million (in 2009).

The Democratic Republic of São Tomé and Príncipe

This island nation consisting of two islands – São Tomé and Príncipe – off the west cost of Africa makes it onto the list by virtue of the fact that the equator runs through an islet called Ilheu das Rolas just south of São Tomé.

Gabon is in West Africa and despite having more than 40 ethnic groups, it has been stable since its independence from France in 1960. It has a population of 1.5 million, mostly Christian.

Republic of the Congo

As the equator continues across Africa, it next runs through the Republic of Congo. This country has been plagued by civil unrest and coups. It has a population of 3.7 million (in 2009) but life expectancy is only 53 for men and 55 for women (probably as a result of all the unrest).

Next is the Democratic Republic of the Congo (not to be confused with the previous country). This is a large country with lots of resources but it has been embroiled in conflict for several years. Government resources backed by Angola, Namibia and Zimbabwe have been pitted against rebels backed by Rwanda and Uganda. Kinshasa is the capital of Dem Rep of the Congo.

It has a population of 66 million (in 2009) and the major religions are Christianity and Islam.

The Republic of Uganda is next crossed by the equator. The primary export is coffee. Since the late 1980s, Uganda has become relatively peaceful, stable and prosperous. Prior to that in the 1970s and early 1980s, Uganda was notorious for its human rights abuses. The equator not only passes through Uganda, but also through some islets in Lake Victoria.

Kenya is a common destination for safari holidays having within its border the Maasai Mara game reserve and many others. The Great Rift Valley also runs through Kenya – it is here that some of the earliest remains of human descendents were located. The equator runs through Kenya north of Nairobi.

The equator runs through the southern tip of Somalia, south of Mogadishu and just north of Kismaayo, before entering the Indian Ocean. Somalia has a population of almost 10 million.

It has a coastline of over 3,000km and it holds a strategic location on Horn of Africa along southern approaches to Bab el Mandeb and the route through Red Sea and Suez Canal. Its transitional government is working to bring stability to the country.

The equator runs through the beautiful Maldive islands although it misses every island, and passes between Gaafu Dhaalu Atoll and Gnaviyani Atoll. The Maldives are south southwest of India.

Next it crosses Indonesia and in fact runs through many islands, most notably Sumatra, Borneo, Sulawesi, and Halmahera. Colonized by the Dutch in the early 17th century and occupied by Japan from 1942 to 1945, Indonesia declared its independence after Japan's surrender, but it required four years of intermittent negotiations, recurring hostilities, and UN mediation before the Netherlands agreed to transfer sovereignty in 1949.

Finally, the equator crosses Kiribati – a group of 33 coral atolls. Kiribati was previously named the Gilbert Islands. The equator misses every island, passing between Aranuka and Nonouti Atolls. 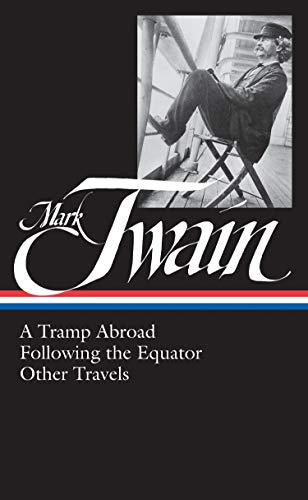 Mark Twain: A Tramp Abroad, Following the Equator, Other Travels (Library of America No. 200)
Buy Now