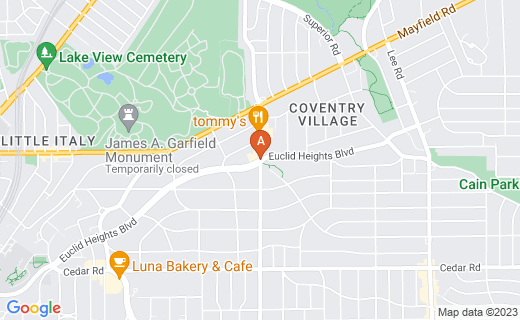 Flash back to the days of hippies & folkies!

The Coventry District is a neighborhood commercial nexus situated in one of the oldest of residential areas of eastern Cleveland, Ohio (it is actually within the city limits of suburban Cleveland Heights, which abuts a portion of Cleveland’s eastern edge).

Historically referred to by locals as either ‘Coventry Village’ or simply ‘Coventry’, this district is a multi-block area aligned along Coventry Road. It is bounded by Mayfield Road at its northern end, and spreads outward along Euclid Heights Boulevard at its southern edge. Coventry is a confluence of shops, cafes, restaurants and entertainment, ringed by fairly dense single- and multi-family housing along tree-lined streets.

The Coventry district grew apace with the surrounding community of Cleveland Heights through the first few decades of the 20th Century. It was initially a neighborhood of commercial merchants and craftsman, along with a mix of professionals. It served some of the densest portion of Cleveland Heights, after the Cedar Fairmount commercial area.

Supported through the years by the significant student population of such colleges as Case Western Reserve University and John Carroll University — and the attendant subset of artists, musicians, protesters and free-thinkers — Coventry in the 1960s and 70s displayed a distinctly hippie vibe. With its record stores, head shops, colorful clothing, posters and impromptu street performances, it was considered by many to be the ‘Haight Ashbury of Northeast Ohio’.

Today, however, Coventry’s ambience is far more gentrified and eclectic — now typified as Bohemian — with a variety of boutiques, art galleries, retail shops and purveyors of casual cuisine suited to almost any taste. To many, it is Cleveland’s own small version of Greenwich Village. In addition to hosting an independent cinema and a food co-op, Coventry also stages a variety of mostly summertime street fairs and farmers’ markets. Local pubs attract live rock bands, and street performers occasionally crop up on better-weather days.

The architecture of Coventry is as eclectic as its other aspects, with some buildings remaining from the district’s earliest years, others displaying years of renovation, expansion and replacement. The food co-op and its attendant public parking garage are decidedly contemporary, as is Courtyard on Coventry, a new multi-story mixed-use infill structure developed by local attorney Lewis Zipkin, and designed by Rick Zimmerman of ZZ Design, in collaboration with TDA (formerly ThenDesign Architecture) of Willoughby, Ohio.