Cowans Gap State Park is located in south-central Pennsylvania in the townships of Metal and Todd. The location of the park was one of the earliest settled areas in this region of Pennsylvania. If you're looking for a excellent park for those family outings then Cowans Gap is the place. There are many non-seasonal, all-year-round, recreational activities at the park. Activities which include hiking the park's many trails, swimming, camping, using one of the many picnic areas, fishing and hunting. Other activities include boating, and numerous winter activities including skiing, ice skating, and ice fishing.

Cowans Gap State Park is comprised of 1,085 acres of park land. Also available are campgrounds, cabins, a fishing pier, and many areas accessible by people with disabilities. The park also provides environmental education programs on request. These programs are open to schools and youth groups. Workshops are also available for teachers. Guided walks of the park are also available.

The earliest history at Cowans Gap involves Colonel James Burd during the French and Indian War. He and his men were building Burd's Road, starting at Shippensburg, to connect to Braddock Road. Braddock Road, being built by British Major General Edward Braddock and his men. Burd's Road was never completed since Braddock was defeated at The Battle of the Monongahela, east of Fort Duquesne. Braddock, along with around 500 of his men, died in that battle. A few years later, when the British were trying to take back the Ohio River Valley from the French, work began on the road again. Which led to the building of Forbes Road under the leadership of General John Forbes. The building of the road was successful and the French and their allies were pushed out of the western part of Pennsylvania.

Cowans Gap gained its name not long after the end of the Revolutionary War when John and Mary Cowan settled in the region. John Samuel Cowan and Mary Mueller met in Boston in 1775. John himself was a loyalist while Mary was a patriot. Which led to conflict, in that Mary's family did not want her to get married to John. Regardless of the protest from her family, they eloped. This was all after John returned from the war as a soldier in the British Army. It was only by the breaking down of their wagon that had they settling at Cowans Gap. John traded his horses and the broken wagon with a chief of the Tuscarora in exchange for land at Cowans Gap. Their home was built along Forbes Road.

In the years after, iron furnaces were operated in the area from 1783 up until 1885. Harrison Kalbach bought timber and land rights in 1893, for 4,800 acres in total, and trees were cut down and sold for lumber. His company also built a railroad, of wooden rails, for the purpose of making it easier for the lumber to reach their markets. In the aftermath, around 1907, a large portion of the old-growth forest had been cut down, destroyed, and the resulting erosion damage was also extensive.

Starting around 1933, the Civilian Conservation Corps began to repair the environmental destruction done to the area. A reforestation effort took place and resulted in thousands of acres of trees being planted. They also built thirty miles of road, thirty-two miles of fire trails, many of which are trails still in use (13 miles of trails), four bridges, and eleven miles of telephone lines. They also constructed cabins, cleared areas overgrown with brush, built pavilions, and even built the dam that formed Cowans Gap Lake. The resulting environmental work and developments led to the opening of Cowans Gap State Park in 1937. 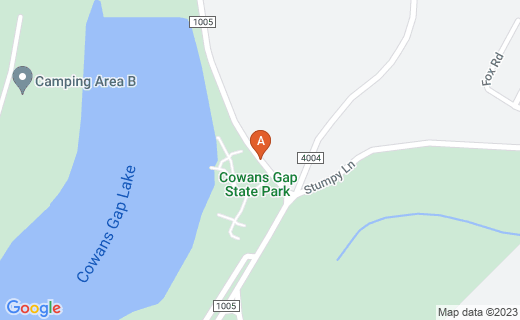