Did you know that before the Oklahoma Panhandle Texas bordered Colorado?

After a cold and windy night in Black Mesa State Park and a failed attempt (because of fierce wind) to climb Oklahoma's highest point of land (Black Mesa), we pushed on toward Amarillo, Texas not far from where we would hike and explore Palo Duro Canyon. The pine studded hills, and rocky, windblown landscapes seemed barren and inhospitable.

But, we just had to stop in Boise City, Oklahoma, the epicenter of the Dust Bowl days of the 1930s. Here in Boise (pronounced like "voice") City we visited the Cimarron Heritage Center to be guided through the museum by a very sweet and hospitable lady named Phyllis. She first showed us the Friendship Quilt Room with walls of hanging quilts made by women during the height of the Dust Bowl. By getting together in someone's barn or garage and quilting, they maintained their sanity while their husbands tried to salvage any crops or gather any stray livestock during the fiercest of winds carrying tons of brownish-black dusty topsoil. The dust clouds rose thousands of feet above the earth like God's curse on the Egyptians in biblical times.

An old rancher, years later, was re-roofing his home to have bucket loads of 1930s dust fall to the ground out of his rafters. He donated a bucket-load of dust to be put on display at the Heritage Center. We couldn't resist picking up some of it with our fingers to have it stick on them like the very finest of river silts.

Not only did Boise City endure the storms of the Dust Bowl during the 1930s, it also went through the horror of being accidentally bombed during World War II. Boise City's County Office Building still has a square pattern of nighttime lights surrounding it. During World War II the Army Air Corps Base in Dalhart, Texas flew practice bombing missions to a range about thirty miles away that was lit up with a square of bright lights. The pilot and bombardier mistook Boise City's square pattern of lights for the bombing range and dropped two bombs on the city that blew up a diner and knocked out the lighting of the county office building. It was so late at night that thankfully no one was injured.

We thanked Phyllis for her tour and ate lunch in a very friendly cafe to drive on to Palo Duro Canyon, all the while looking forward to hiking the Lighthouse Rocks Trail under warm and sunny skies the next day.

Oklahoma's Panhandle is also known as No-Man's-Land. Why? Because it is a thin strip of land in the middle of no where. 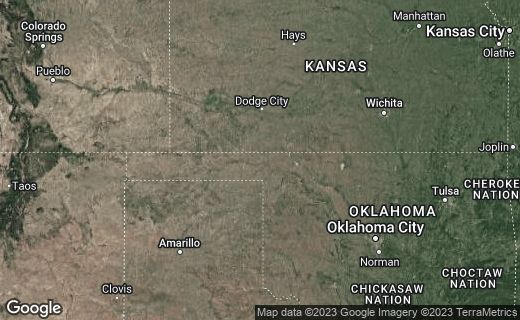