Culver City Is One Great Town

Culver City: The City With The Smallest Main Street

Harry H. Culver, founder of Culver City was more than a Los Angeles-based real estate agent he was also a visionary. Born in Milford, Nebraska on January 22, 1880, the dream he eventally realized might've started in his childhood. Discovered by his grandfather, his hometown helped form the hardworking philosophy he'd follow throughout his life.

When most eight year old boys were daydreaming about summer, he was working two jobs.After joining the National Guard at 15 he then attended the University of Nebraska but spent his Senior year heading for the Spanish-American war. Stricken with typhoid fever, before he got to see any action, he briefly went back to school, but left again to work in the Phillipines. Bad luck hit him immediately again, when the import-export company he was working for went bankrupt. Unemployed and penniless, he next got a job as a journalist for the "Manila Times".

Over time he became an excellent reporter and friend of the governor of the Phillipines, William H. Taft. Taking advice from friends, who recognized his talent and ambition, he decided to go into business for himself. In 1910, he came to California and went into real estate, mentored by I.N. Van Nuys. Finally in 1913 he got out of his car on West Washington Blvd. and saw "his town" in 93 acres of barley. Not only did he create "a balanced community of residential, commercial and industrial properties," he also wanted to create a thoroughfare to the beach.

Starting with less than $5,000 he laid out his plan for the "Culver Investment Company" to prospective investors at the "California Club of Los Angeles". To attract investors and residents to the area he used public relations tactics worthy of P.T. Barnum. Once he gave away "a building lot to the parents of Culver City's Most Beautiful Baby," and another time he "staged a polo game with Ford automobiles".

When he married actress Lillian Roberts and she had their daughter Patricia, his dedication to making this a family-oriented city increased. For 17 years he rarely lost his enthusiasm and insisted on "living and becoming part of the community". Gradually the city grew, until it had a growing list of businesses including, The Harry H. Culver Real Estate Office, a grocery store, two churches and seven newspapers. In 1915, the studios started coming, and by 1917 Kalem Motion Picture Company (later Essanay) and Tom Ince's Studio (later Triangle) would make a city-wide impact. Today Ince's studio is known as The Culver City Studios and its owner isn't just remembered for genius, he's also remembered as a major player in an early Hollywood scandal.

In the book "Hollywood Babylon" author Kenneth Anger writes, "Tom Ince was accidentally shot by William Randolph Hearst. During Ince's 43rd birthday, aboard Hearst's boat the Oneida,  Marion Davies (Hearst's lover) slipped off to make love to Charlie Chaplin, then screamed "Murder". All the guests, including Hearst with his diamond studded revolver, ran to her aid. In the confusion, Ince was shot, even though the intended target was Charlie Chaplin. His body was immediately cremated and no official inquest was ever conducted."

Known as "a building boom" the 1920s Culver City was also tumultuous and decadent. 520 citizens lived there in 1920 and the nightlife was electric. Besides "The London Club", "The Cotton Club" and Fatty Arbuckle's "Old Plantation" club, a race track and speedway provided hours of entertainment. Bootleggers practically infested Washington Blvd. with illegal stills that exploded on a regular basis, while prostitutes, book makers and gangsters invaded the local nightclubs.Since the police, lawyers and judges were also prone to corruption a lot of crimes committed then went virtually unpunished.

Amidst this Sodom and Gomorrah backdrop the movie industry thrived with Hal Roach's studio shooting "Our Gang" and "Laurel and Hardy" productions right on the city's streets. But the real powerhouse was M-G-M, which started the star system, and was one of Culver City's biggest employers. Strong, even when the Depression hit, M-G-M employed as many people as Helms Bakeries and Western Stove. In a tongue-in-cheek rivalry, that was settled at "The Prisoner of Zenda" movie premiere, Culver City and Hollywood "buried the hatchet". From then on it was agreed that "Culver City was where Hollywood movies were made".

In addition to the old Stellar Hardware (that closed recently), built in 1923, the Culver Hotel, built in 1924 and Main Street, downtown Culver City is an area steeped in the past. Thanks to the Historical Society founded in 1980 the city's landmarks are memoralized with plaques and documentation. The Culver Hotel, called "a skyscraper" in the 1924 "Culver City Daily News" was used in "Little Rascals" and "Laurel and Hardy" productions. It was originally called the Hotel Hunt and was a part-time residence for Clark Gable, Greta Garbo and Joan Crawford. Owned by John Wayne, before he donated it to the YMCA, the actors who played the Munchkins also lived there duing the making of "The Wizard of Oz". Sadly it hit hard times and became overrun with homeless people and rundown until Lou Cartlett general partner of "Historic Hollywood Properties" rescued it for awhile and "TLI Business Exchange" finally bought and refurbished it. Today it's one of the most striking buildings in downtown Culver City.

Although Main Street is "the smallest Main Street in the world" it's still brimming with movie history. Tourists from all over the world have come and visited Main just to see where the Laurel and Hardy films were shot. There was even a book, published in Holland that mentioned it as a famous spot. Created in 1913, it's one of the city's most prominent landmarks.

When you look at Culver City today with its galleries, restaurants and thriving foot traffic it's hard to imagine it never being here, but fortunately its beautifully preserved landmarks remind you that it does have a past that was just as fabulous as its present.

1) Culver City's flower is the Lantana

2) Harry Culver's first home was "on the corner of Delmas Terrace and Washington Blvd.".

3) Part of Irving Thalberg's film "Ben Hur" was shot on Venice and LaCienega.

Culver City Is A Wonderful Place To Visit 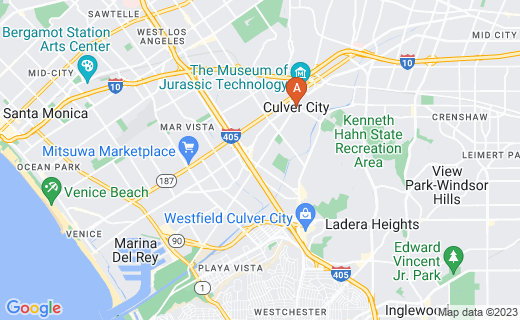