Delft City of Delftware Pottery, House of Orange and Vermeer

Melkmeisje by Vermeer in Delft

Delft is a fine example of a typical Dutch city, situated not far from The Hague. First of all, it has a beautifully preserved historic city centre with canals and their centuries-old canal-side houses, courts of charming almhouses,narrow walkways and a marketplace with its splendid city hall. Then, within easy walking distance of the lively city centre, one can find a treasure-trove of cultural sites to see: the famous Delft Blue pottery, scenes painted by Vermeer and the many visible reminders of the early days of the House of Orange.

Delft has over 100,000 inhabitants and is situated close to the cities of The Hague and Rotterdam.

The Army museum (Legermuseum) is situated in the seventeenth-century Armamentarium - an arsenal from the Dutch East India Company period. The museum displays the world of military history and current affairs, war and peace, moving stories, ans colorful traditions. The Legermuseum has an extensive collection - from fire arms and tanks to harnesses and musical instruments.

Museum Het Prinsenhof is the museum about William of Orange and Delft in the Golden Age. It is situated in the former Sint Agathaklooster. In 1572, William of Orange chose this convent as one of his homes. From this base, he led the uprising against the Spanish landowner Philip II. In 1584, William of Orange was murdered here and the bullet holes are still visible in the wall. The museum tells the story of the Uprising on the basis of paintings and other objects. There is also art from the Golden Age, including paintings by contemporaries of Johannes Vermeer. The atmosphere of the building is still that of a medieval convent.

The Nieuwe Kerk dates back to 1381 and is located at the Markt. It has close links with the House of Orange-Nassau and the Dutch royal family. It contains the crypt where the members of the royal family find their final resting place. Assassinated in 1584, Prince Willem van Oranje was the first member of the House of Orange to be interred here. The impressive mausoleum of the Prince near the crypt is now open to visitors again, following a major restoration of four years (1997-2001). The church has 17 stained-glass windows. There is an exhibition inside the church with a video presentation. The church is 109 meters high.

The Royal Delft Delftware (also known as Koninklijke Porceleyne Fles) factory was established in 1653. This the last remaining Delftware factory from the 17th century. The world famous Royal Delftware is still entirely hand-painted according to centuries-old tradition.

The museum has a huge collection of Delft Blue antiques, which gives you a glimpse of the history of Delft Blue ware. In the factory you will be able to see the production process. The entire collection of traditional and modern earthenware is displayed in our showroom, as well as a collection of attractive souvenirs. In the coffee corner you can enjoy a drink or a snack, with a beautiful view of the inner garden.

You are even allowed to paint you own piece. 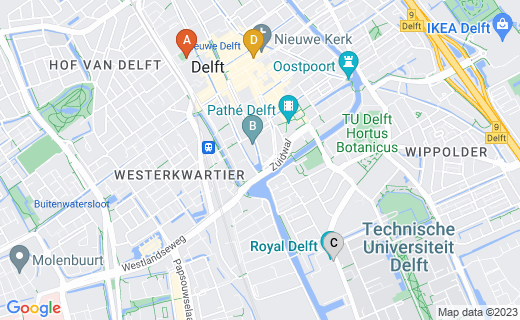