Dhanushkodi is situated southeast of Pamban on the eastern coast of Tamilnadu, India. It is at the southernmost tip of Rameshwaram Island, and is the closest point of the Indian coast to Srilanka. Dhanushkodi is also significant as it has the only land border between India and Srilanka; a 45 meter stretch in Palk Strait, one of the smallest of its kind in the world.

The Hindu scriptures say that Dhanushkodi is the place where Lord Ram pointed with the tip of his bow and Lord Hanuman along with his army built a bridge (Ram Setu) to cross the sea to reach Srilanka. The bridge was made entirely of limestone and barely connected the Indian mainland with Srilanka. The followers of the Hindu faith believe that Lord Ram built the bridge in his quest to reach Lanka where Ravana is said to have reigned.

Dhanushkodi was a thriving tourist town and pilgrimage centre until 1964. The place used to have a railway station, a railway hospital, a post office, primary schools, customs and port offices. There were also ferry services between Dhanushkodi and Talaimannar in Srilanka, 31 kilometers away. The train service between Dhanushkodi and Chennai was operational during this period and was called as the Boat Mail. Passengers when they arrived at Dhanushkodi station would have a steamer waiting for them to ferry them across to Srilanka.

Life at Dhanushkodi was not always easy as areas around Rameshwaram were frequently ravaged by cyclones and storms. Surveys concluded that the Dhanushkodi township sank by almost 5 meters during the 1948-49 tectonic movement leading to a 7 by half kilometer stretch in the north – south direction getting submerged. This patch of land devoured by the water had places of worship, residential areas, roads and other important buildings including the Tanjavur Raja’s Dharmasala.

On 17 December 1964, a tidal wave started as a result of the formation of a depression in the South Andaman Sea. It intensified into a cyclone by the 19th and started moving westwards towards the shore by the 21st. After crossing Srilanka on the 22nd, it touched the Indian coast on the night of December 22-23. The tidal waves estimated around 7 meters high bombarded into Dhanushkodi town with a wind velocity of 280km/hr. The Pamban-Dhanushkodi Passenger train which left Pamban with 110 passengers and 5 railway staff, was only few hundred yards off Dhanushkodi Railway station when it was hit by a massive tidal wave. All the six coaches along with the engine were devoured by the water leaving no survivors to tell the tale.

The tragedy came to light only after 48hr when a preliminary assessment was done to assess the damages. After an aerial search, the Chief Minister of the then Madras state reported that the tip of an engine could be seen in the water. The Pamban bridge which connected the Indian mainland to Rameshwaram island was also washed away by the cyclone leading to the common belief that the train tragedy occurred on the bridge rather than at Dhanushkodi (28 kilometers away). A total of around 1800 people were swallowed up by the waves never to be seen again. The surging waters stopped just short of the main temple at Rameshwaram where hundreds of people had taken refuge. Nevertheless an entire town replete with all its people, houses, buildings, infrastructure and everything else one can imagine was erased from the face of the planet in one fateful night.

The Rameshwaram cyclone is regarded as one of Bay of Bengal's fiercest cyclones of the 20th century. The aftermath of the 1964 tidal wave led the Madras government to declare Dhanushkodi as a Ghost Town unfit for living. The ruins of the town can still be seen with only the church showing any resemblance to its former self.

Dhanushkodi is now an abandoned town with only a few local fishermen living there at certain months of the year in makeshift houses. In 2004 they witnessed a rare event when just before the Indian Ocean tsunami struck South India the sea around Dhanushkodi receded about 500 meters from the coastline. The submerged part of the Dhanushkodi township was exposed for a brief period of time after which it was reclaimed by the water once again.

The Dhanushkodi of Today

Dhanushkodi is currently a very popular tourist destination where people from far and wide come to see the ruins of what had been a flourishing township. The pilgrims who come to Rameshwaram also visit Dhanushkodi as they believe it to be a mythical town with miracles in store in every nook and cranny. If a pit dug on a sandy beach flanked on both sides by ocean can give sweet drinking water, then probably they are right; Dhanushkodi is not just another Ghost town after all.

How to Reach Dhanushkodi

Visitors are permitted to Dhanushkodi only during the day.

Dhanushkodi - On The Map 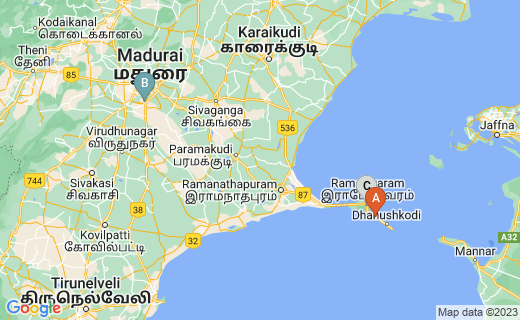