Places To See In Ireland’s Heartlands

Paola Bassanese is a freelance author and writer specialising in food, lifestyle and entertainment.

The Centre of Ireland

How well do you know the centre of Ireland? While most guided tours will stop at popular spots like Dublin and the Cliffs of Moher, the hinterland can offer many opportunities to explore beautiful landscapes.

The River Shannon runs through 11 Irish counties and also crosses the centre of Ireland.

The Irish Tourist Board is keen to attract more visitors to this area, which is being branded as Ireland’s Hidden Heartlands. The waterways are main access points that you can explore by river cruise, walking along pathways or by bike. There is a plan to complete a Dublin to Galway cycling route (Dublin to Galway Cycleway) covering a distance of 276km in total, completely safe from car traffic.

As a suggestion you could start your exploration of the centre of Ireland from the medieval town of Athlone on the River Shannon. I discovered Athlone by chance while I was house-hunting around Ireland – an Airbnb host told me her family often went to Athlone on holiday and described it as “very relaxing”. After moving to Athlone myself I can confirm that the quality of life here is very good and there are plenty of lovely restaurants.

The main attraction in Athlone is the Castle, which underwent a complete refurbishment and hosts various events during the year. The original stone structure dates back to the year 1210 but the previous wood building can be traced back to 1129 when the Anglo-Normans needed a fortification to protect the bridge over the River Shannon.

On the other side of the bridge (built in 1844 by Thomas Rhodes, related to explorer Cecil Rhodes) you’ll find Luan Gallery, a venue for temporary art installations. Formerly the local library, it opened in 2012 after extensive renovation.

During the summer you can go on river cruises to Clonmacnoise monastery in the south and Hudson Bay in the north along the River Shannon.

Athlone gets its name from the ford of Luan. A ford is a shallow part of a river that can be crossed on foot by wading – the rapids in the River Shannon were dangerous but the ford was the only spot where it was safer to cross. The Gaelic name for Athlone, Ath Luain, means Luan’s Ford.

According to the Guinness Book of Records Sean’s Bar is Ireland’s (and the world’s) oldest pub and it’s located on the left bank of the River Shannon in Athlone, just below the Castle. According to Sean’s Bar’s website, Athlone gets its name from an inn-keeper called Luain Mac Luighdeach, who helped the travellers passing through the village in the period around 900AD who needed to cross the River Shannon’s rapids.

Rindoon is probably one of those “best kept secrets” that is certainly preventing it from being swarmed with tourists. Set on private farmland overlooking Lough Ree, the largest lake in the River Shannon, it is the site of a medieval village that can be accessed by the public on foot. You can walk to the main site of the medieval village ruins within half an hour from the main gate, or you can choose the panoramic route on a loop of the peninsula which lasts about one and a half hours.

Rindoon village is quite well preserved, considering the stone structures were built in the 13th century. It is thought that the village has been in its abandoned state since the 16th century, which would explain why there are no signs of expansion of its boundaries. Rindoon was inhabited by wealthy families and farmers working for them. The windmill in the village was used to mill the grain harvested by farmers, who had to pay the land owners to grind the grain to make flour.

Currently the land on which the walled village sits is privately owned and the fields are used to keep sheep and cows. You must be careful as you walk across the fields – not only there are plenty of cow pats to avoid but the animals may not always be friendly to visitors. Caution is recommended when walking near livestock. However, it’s still worth a visit for the stunning views and dream-like atmosphere.

You can travel to Rindoon by car from Athlone in about half an hour.

The site, which is free to visit, attracted only 8,000 visitors in 2016 – not many people were aware of it beforehand.

Clonmacnoise is a medieval monastic settlement dating back to AD 548-9 and further developed during the 10th-13th century comprising churches, a cathedral and a burial ground. Its founder was St. Ciarán Mac a tSaor, the first abbot of Clonmacnoise.

You can get to Clonmacnoise by car or by boat. River cruises from Athlone travel to Clonmacnoise during the summer and the journey takes about one and a half hours. You need to pay an entry fee to the monastery site which includes access to the grounds and to the museum, where you can watch audio-visual presentations and see the ancient high crosses that used to stand outside, now protected from harsh weather. Free guided tours are available.

The monastery was a centre for learning that thrived for 600 years.

The site is extremely well maintained and has beautiful views overlooking the River Shannon and surrounding countryside.

The Centre of Ireland 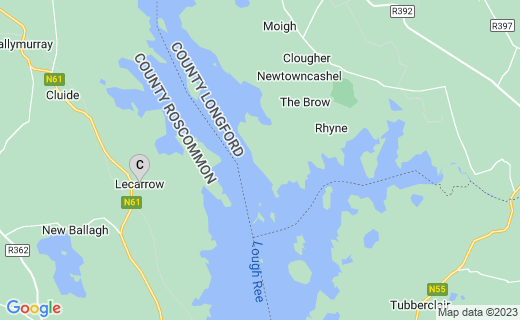 Exploring the Centre of Ireland

Depending on your travel style, you can either choose to plan an itinerary or come across places of interest organically. For example, my preferred way of exploring a new area is to look at Google Maps searching for places of interest. This is not a fool-proof way of seeing an area because some places may not be listed, so as a back up you can bring with you a travel guide book. Asking for recommendations is always a good idea, too.

Many venues are only accessible by car – regrettably the public transport network does not service them adequately. However, you can stay in one place and easily explore the surrounding areas by car.

Are you planning to visit Ireland?