I love beautiful scenery and the changes of the season offer us some scenes of beauty and I love to travel. Learn from travel experience.

A trip to the Dominican Republic in January is just perfect timing, as the weather is lovely after the cold of the United States, and nature is still in bloom.

I flew into the Santa Domingo Airport, enjoying flying over the beautiful blue, sometimes turquoise, ocean with numerous islands below. Even at 44,000 feet you could tell that most islands were too small to be inhabited, and I suspect many were under water part of the time.

I came to visit my oldest son, daughter-in-law and grandson, and see the wonderful sites of the Dominican Republic. They iive in a small town about two hours west of the capital. Santo Domingo is the oldest colonial city in the Americas

Hosing the street keeps dust down

My son picked me up at the airport, which is on the east side of Santa Domingo and the first shock was the volume of traffic in Santa Domingo. It seemed more chaotic than what I recalled from visiting Mexico City. Two lanes didn't mean a thing to the Dominican people.

Often three vehicles with a few motorcycles thrown in was the norm for a double lane road. My son’s explanation was "the Dominican people have their own system of driving which seems to work for them." It didn't seem to work as well for my nerves though.

Regardless we made it safely to the city of Azua, which is where my family lived. Before we left Santa Domingo we stopped for groceries at a large store, which was very interesting. Paper products and anything imported were the most expensive.

Once we were away from Santa Domingo the two hour drive was much easier and interesting as we traveled through many small towns and numerous fields of produce.

There was still a lot of traffic, and the quantity of supplies and the number of people loaded on a moped or motorcycle was impressive. Now I knew where all those mopeds went we use to see in the late 1970s and early 1980s! Many men drive mopeds aa a taxi in the smaller towns.

The Dominican Republic is the Eastern part of Hispaniola, and Haiti is on the Western end. Weather in Dominican Republic is typically sunny, with an annual mean temperature of 80°. The rainy season is from May to October. Hispaniola is in the path for many hurricanes, so this is a concern if you are traveling in the fall of the year. It is a Spanish speaking island, and they love baseball!

The video below shows the large variety of things to do when visiting the Dominican Republic, as they have white water rafting, fishing, scuba diving in the Caribbean and in caves, plus hiking in the beautiful mountains where bananas and other fruits are readily available on the trees. Obviously there is sun bathing and swimming as well.

Overview of the Dominican Republic

A Day in Azua

My son and his family were missionaries for four years in the Dominican Republic and they built a church, plus managed a medical clinic which through a government contract.

The clinic was primarily for the very poor people of El Prado, which is located right next to Azua. I had not seen my son and family for almost a year, so it was very exciting to visit them and also see the sites of a new country

The day I arrived we had a great meal of foods indigenous to that area, and that cloudless night we climbed on the roof where it seemed like we saw a million stars as there are no big city lights to affect the view.

The temperature went down into the 60’s, which felt great to me, but the Dominican people considered it quite cold. My son’s home was on a fairly busy dirt road, which was typical of most residential streets.

That meant you were always fighting the dirt that blows into the house. All tile flooring helps, and there is a drain for water in the floor of the bathroom, which simplifies mopping. My grandson’s job was to hose down the dirt road in front of the house each day to help keep the dirt outside.

The next day we went to the produce and meat market, which was quite an adventure. "Americana’s" was uttered frequently by many of the merchants. Everyone was smiling and friendly. Vegetables were laid on the ground on cloths and meat was left uncovered, which attracted the flies. There was a cow's head and they were just about to slaughter a young goat, so we quickly left that area (without purchases!). There were large bags of different types of beans.

We made our purchases and stopped in a small shop for drinks, chips or "dulces' (any type of sweet treat). I was amazed at my grandson’s ability to communicate, as he was so young. I was pretty well stuck with Hola, Gracias and Bueno. We also went to the beach to enjoy the beautiful turquoise water and deep blue sky.

Touring and shopping in Santa Domingo is also a treat, and we spent two days in the city spending on night in a hotel. There are several historical sites to visit. We took a guided tour and walked through the fort and heard of the history of the island.

First we toured the Alcazar de Colon which was built by Columbus’s son Diego in 1510, which has now been beautifully restored. The Spanish built a castle called the Fortaleza Ozama in the 16th century with a medieval style at the entrance to Santo Domingo. This castle is the oldest formal military still standing in the Americas. 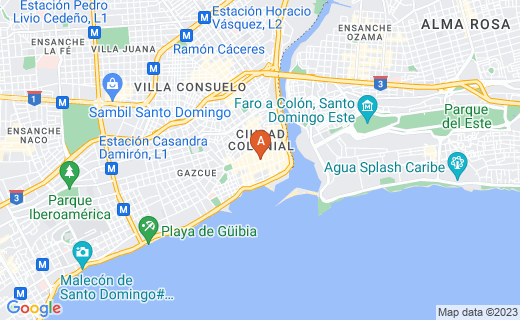 The center of the national government of the Dominican Republic is the National Palace in Santo Domingo, which has the President's office, as well as the National Congress. These are located in the Zona Colonial where the river Rios Ozama runs alongside of the city with the Caribbean to the East

Another beautiful place we visited was the oldest cathedral in the Americas, which is the Cathedral of Santa Maria la Menor also in Santo Domingo. The front is beautiful as it is tinted with golden-tinted coral limestone facade. The high altar is chiseled out of silver. This church houses a beautiful art collection and ancient woodcarvings.

Also in the Zona Colonial is the Mercado Modelo, a busy market where you'll find Dominican coffee, cigars, local produce, straw products, wood carvings, jewelry, crafts and many other items. Remember to bargain! You can get a better deal.

The Dominican Republic has the most extensive cave system in the Caribbean. The caves are interesting to explore, and many they contain artwork painted and etched on the cave walls by the indigenous Taino Indians, dating back 1,000 to 3,000 years.

There are also several national parks where the tours are available Also, many people go cave diving.

We visited Barahona, which was only about an hour drive toward Haiti from Azua. There are a few small hotels, but people really come here to see the landscape. The environment includes mountains, lakes, unusual vegetation and a fantastic coastline. The beaches tend to be more remote, so you have a little more privacy without such big crowds.

There are 3 national parks, and the largest one is Parque Nacional Jaraqua, which contains Laguna Oviedo. It is home to 60 species of birds and home to the largest population of flamingos. This is a protected environment.

This park also has Lago Enriquillo, the largest salt water lake in the Antilles, located 45 meters below sea level and home of the American crocodile.

The third park is Parque National Sierra de Baoruco, which is mountainous with rainforest type vegetation. All of these parks are gorgeous, and it is so interesting to have such distinctly different environments in a relatively small area. 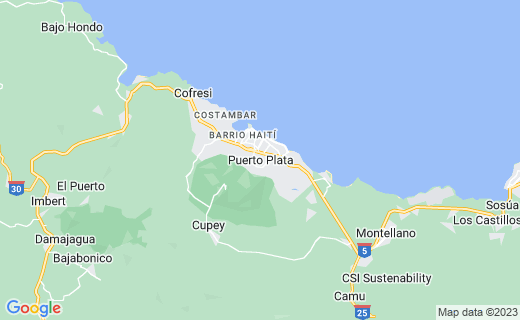 Many people travel to Puerto Plata to see the annual migration of the Humpback Whale as they travel from the colder Atlantic to the warmer, shallow waters of the Dominican Republic where they mate and give birth to their young. There is a 3,000 square kilometer reef system called Samana Bay which is 70 miles north of Puerto Plata that has a winter population of over 1500 Humpback Whales.

Later in the season you can watch the calves follow their mothers. There are cruises available to see the whales up close, and you just need to bring sun screen, sunglasses and your camera for a marvelous time. There are several lovely hotels in the area as well.

No trip to this area would be complete with a tour of the Brugal Rum Factory, as their rum gets rave reviews. In this general area you will also notice a lot of tobacco growing. Many of the best growers from Cuba settled in the Dominican Republic when Castro came to power, and they are known to make high quality cigars.

Dominican Republic travel is interesting, and you will see multiple types of environments if you travel to various locations on the island. The mountains are gorgeous, and I have to say walking up to a banana tree and eating the ripe banana immediately tasted wonderful. I also enjoyed the food of the DR. It is not too hot and spicy but seasoned very well. Flan is the national dessert.

I found the people to be friendly and usually smiling. There are many Dominican Republic resorts with some having all inclusive packages. The weather is comfortable, and I particularly enjoyed the tour in Santa Domingo, as well as, the bargaining in the market. I thought it was a very interesting and fun place to visit.

The copyright, renewed in 2018, for this article is owned by Pamela Oglesby. Permission to republish this article in print or online must be granted by the author in writing.